Donald Trump won the presidency because non-college white votes surged towards the polls and because African-Americans walked away, says a new survey by the left-wing Center for American Progress.

The two shifts were critical for Trump’s breakthrough in the Democrats’ so-called “Blue Wall” in Michigan, Pennsylvania, and Wisconsin says the report, titled “Voter Trends in 2016: A Final Examination.”

Across these three key states, we found large shifts against Clinton among white non-college-educated voters, although typically not as large as those indicated by the exit polls. These shifts had the largest effects on Clinton’s fortunes in these states; had they not occurred she would have carried all three states easily …

Turnout among non-college white voters surged from 54.3 percent in 2012 up to 57.3 percent in 2016, ensuring their share of the overall electorate dropped by just one point to 44.8 percent, even as Latinos and Asians nudged up by 1.4 percent to a share of 14.4 percent. Moreover, many blue-collar Democrats pulled the lever for a third-party, allowing Trump to win two blue-collar white votes for every one vote which went to Clinton.

Those two trends did in Clinton’s hopes, the report says, even though she got a larger share of the growing population of college-educated whites. 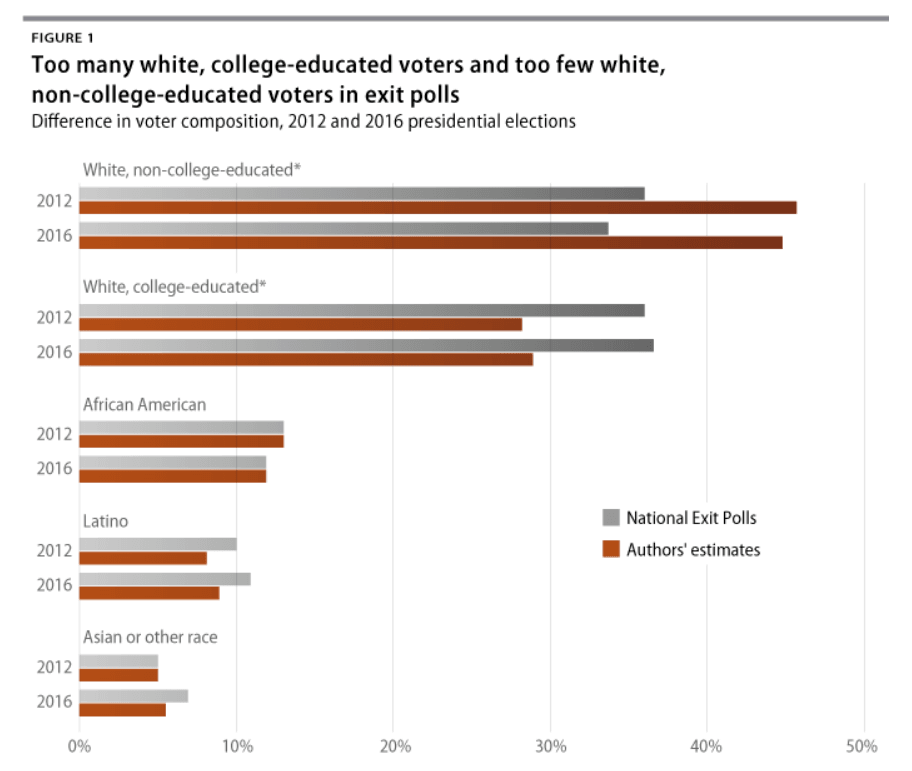 The November 1 report does not try to explain why Trump managed to motivate the surge of blue-collar voters, partly because the answer is likely Trump’s pro-American immigration policy. That explanation is very unwelcome for the Democratic Party to accept, partly because it has based its political strategy for more than a decade on maximising the flow of poor, unassimilated, government-dependent immigrants into the polling booths.

In fact, one of the report’s authors, Ruy Teixeira, led that trend by publishing a 2002 book, titled The Emerging Democratic Majority. The book predicted that upper-income professionals and feminists would be able to mobilize working-class Americans and immigrants to vote Democratic, but the authors failed to understand how the political interests of upper-income professionals and feminists — such as greater civic diversity, free trade, cheap-labor migration, and sexual autonomy — would prove so harmful to blue-collar Americans.

President Barack Obama knew his progressive policies strained the Democratic coalition, but he did not moderate his reach for power. For example, Obama wrote in his 2006 autobiography, “The Audacity of Hope.” that the “huge influx of mostly low-skill [immigrant] workers provides some benefits to the economy as a whole… [but] it also threatens to depress further the wages of blue-collar Americans.” However, eggs and omelets, because “in my mind, at least, the fates of black and brown were to be perpetually intertwined, the cornerstone of a coalition that could help America live up to its promise,” he wrote. 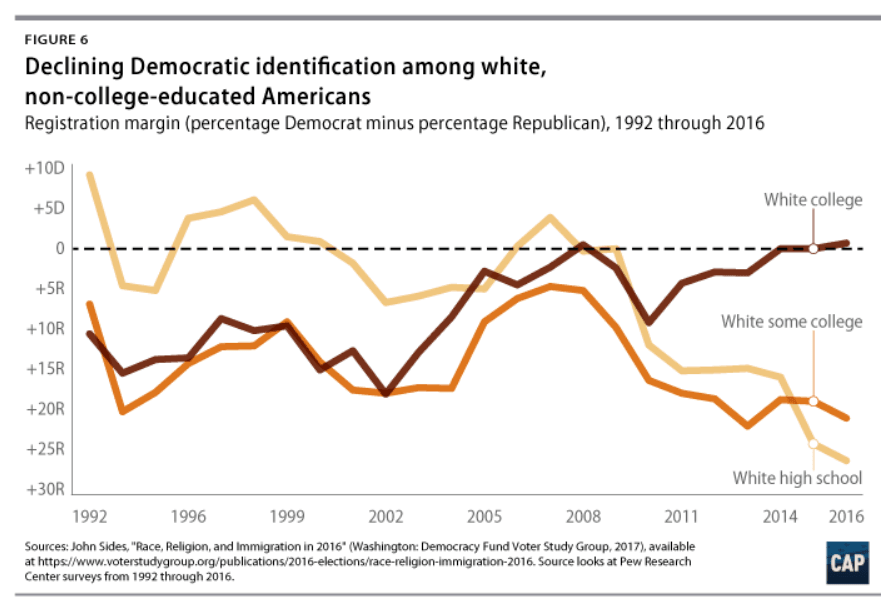 Industry-funded “nation of immigrants” polls show that Americans want to welcome migrants. But “fairness” polls show that voters put a much higher priority on helping their families, neighbors and fellow nationals get decent jobs in a high-tech, high-immigration, low-wage economy. That political power of that higher priority was made clear in November 2016 when Americans put Trump in the White House.

Similarly, Obama admitted after the election that his promotion of the transgender ideology also hurt Hillary Clinton’s chances, saying:

There are clearly, though, failures on our part to give people in rural areas or in exurban areas, a sense day-to-day that we’re fighting for them or connected to them. Some of it is the prism through which they’re seeing the political debate take place. They may know less about the work that my administration did on trying to promote collective bargaining or overtime rules. But they know a lot about the controversy around transgender bathrooms because it’s more controversial, it attracts more attention.

To win back the White House, the authors urge Democrats to boost support among working-class whites and non-whites. But they do not discuss how the Democrats’ fervent support for immigrants and social outsiders makes it more difficult for them to win mainstream white or black votes. In fact, the report does not even mention immigration, as it though urges the party to do more of everything:

Rather than deciding whether to focus on (1) increasing turnout and mobilization of communities of color, a key component of the Democratic base, or (2) renewing efforts to persuade and win back some segment of white non-college-educated voters and to increase inroads among the white college-educated population, Democrats would clearly benefit from pursuing a political strategy capable of doing both.

Increasing the turnout of voters of color to Obama-level numbers, particularly among African Americans, would have turned the election narrowly in the Democrats’ favor. If black turnout and support rates in 2016 had matched 2012 levels, Democrats would have held Florida, Michigan, Pennsylvania, and Wisconsin and flipped North Carolina, for a 323 to 215 Electoral College victory. So increasing engagement, mobilization, and representation of people of color must remain an important and sustained goal of Democrats. They cannot expect to win and expand their representation in other offices without the full engagement and participation of voters who are black, Latino, and Asian American or other race.

At the same time, the Democrats would have made even larger gains in most states if they had successfully held President Obama’s 2012 margin among white voters without a college degree, regardless of turnout. Under this scenario, Democrats would have held Florida, Iowa, Michigan, Pennsylvania, and Wisconsin for a 314 to 224 Electoral College victory. Given the fact that the white non-college-educated voting population is almost four times larger as a share of the electorate than is the black voting population, it is critical for Democrats to attract more support from the white non-college-educated voting bloc—even just reducing the deficit to something more manageable, as Obama did in 2008 and 2012.

The CAP’s three progressive authors also fail to note the party’s postgraduate-professional leaders have their own self-interests — including cooperation with major business interests, encouragement of immigrant labor and aggressive enforcement of diversity — — which are also lethal to the future of another Democratic constituency, white-collar college graduates.

Many of those graduates are watching the Democrats’ policies ensure more good jobs get automated, outsourced or stigmatized. That trend creates an opportunity for Trump to boost his share of that voting bloc by reducing white-collar outsourcing, often via unpopular guest-worker programs.

The authors are apparently so alarmed by their data that they warn Democrats that Trump can win again in 2020:

President Trump can conceivably reconstruct his primarily white coalition from 2016 with very few changes and still eke out a narrow Electoral College victory in 2020. But this assumes that Democrats do little to either increase the turnout of voters of color or to make inroads with disaffected white Trump voters, particularly Obama-Trump voters.