Democratic leader Sen. Dick Durbin is retreating from his threats to block federal spending unless the GOP agrees to his no-strings DREAM Act amnesty — but is now trying to find GOP allies for an amnesty which includes token border-security measures.

The retreat was called during his December 10 appearance on “Face the Nation,” where Durbin was reminded of his prior claim that “I’m not prepared to go home for the holidays until we get our work done.” In response, the second-ranking Democrat in the Senate said the amnesty is just one of several issues in the budget debate, effectively dropping his amnesty-or-shutdown threat:

There are many important issues [in the budget]. DACA to me personally and the DREAM Act are very personal and mean an awful lot. But when we’re talking about funding our government, providing the resources and programs that many middle income families use across America, dealing with the opioid crisis, making certain that we take care of our veterans, making certain that we have the money for biomedical research, these are part of the conversation and part of the dialogue as we close down this budget. It is up to the Republicans to make a decision about what we will do. I think we can get this done right.

Durbin’s fallback tactic is reviving the “Gang of Eight” group with several new GOP Senators to demand an amnesty in exchange for a few symbolic border security measures, such as extra video cameras. His plan was highlighted by a report in TheDenverChannel.com.

The new discussion involves pairing the Dream Act with some border security measures in an attempt to pass a bipartisan solution for the undocumented immigrants brought to the U.S. as children, three Senate aides told Denver7 in interviews this week…

Sens. Jeff Flake (R-Ariz.), Michael Bennet (D-Colo.) and Democratic Whip Dick Durbin (D-Ill.), who were all part of the bipartisan “Gang of Eight” that passed a comprehensive immigration reform package through the Senate in 2013, are leading the discussions, according to the three aides with knowledge of the talks…

Two of the Senate aides also told Denver7 that Republican Sens. Cory Gardner of Colorado and Lindsey Graham of South Carolina were involved in the talks. Graham was also a member of the “Gang of Eight” and is the sponsor of this year’s version of the Dream Act …

The “Gang of Eight” proved to be a political disaster for Durbin and for Sen. Chuck Schumer, the two leaders of the project. It was introduced in 2013 and it generated massive national opposition which helped cost the Democrats nine seats in 2014. In 2016, real-estate investor Donald Trump used the issue to win the GOP nomination and the Presidency, sending Schumer and Durbin back into the minority.

Since then, Democrats have pushed a scaled-down — but large — amnesty, dubbed the DREAM Act. But public opposition has also blocked the DREAM Act, which would put 3 million migrants on a fast-track to federal welfare programs, such as Obamacare, get them into voting booths starting in 2020, and allow them to bring in millions of chain-migration relatives.

Democrats now hope a few token border-security measures — such as extra surveillance cameras, or a few miles of border fence — can recruit support from 12 GOP Senators to reach the Senate’s 60-vote threshold for action, and more importantly, help the Democrats block the GOP’s emerging 2018 immigration reform. The GOP reform is Sen. Chuck Grassley’s SECURE Act, which would Americans’ raise salaries by ending chain-migration and the visa lottery.

The working proposals from the bipartisan group would allow for some border security measures to be added onto the Dream Act base, three sources said. They said that the added security measures were being included to get more Republicans and the White House on board.

Some of the border security measures that have been discussed include improving technology, adding fencing along certain parts of the border, as well as other border security-strengthening measures posed by U.S. Customs and Border Protection, including new drone technology, cameras, hiring incentives, and drug interdiction measures, two people told Denver7.

“I think any option is on the table. We need to pass the Dream Act by the end of the year,” one person said.

President Donald Trump is expected to reject Durbin’s new pitch. On October 8, Trump announced his popular immigration principles, which include making E-Verify mandatory, plus ending chain-migration and the visa-lottery. The biggest element in Trump’s plan is ending chain-migration, which would raise Americans’ salaries by halving the inflow of legal immigrant workers. 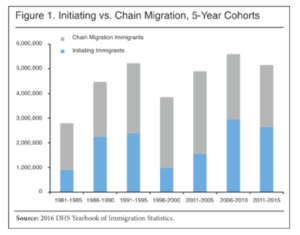 Trump is also pushing for funds to build a border wall. So far, GOP leaders have allocated $1.6 billlion in 2018 to build or upgrade just 74 miles of border wall.

GOP Senators are wary of Durbin’s project. For example, Durbin claimed Sunday that GOP Sen. Lisa Murkowski backs an amnesty for the 3 million young illegals, usually dubbed ‘dreamers’ by Democrats and the media. Durbin told “Face the Nation” that:

Lisa Murkowski yesterday tweeted that her Christmas wish – her greatest Christmas wish is to see this done, DACA and the DREAMer issue resolved, this calendar year. It is within the power of the Republicans to get this done and to put together a package that we can pass. We want to stand by them, work with them, and get that done.

Breitbart News could not find a Murkowski tweet touting the amnesty.

Colorado’s Sen. Cory Gardner has kept a low profile in the debate, but he announced in September that he supported Durbin’s no-strings DREAM Act amnesty:

Children who came to this country without documentation, through no fault of their own, must have the opportunity to remain here lawfully. I’m proud to join with [Democratic] Senator [Michael] Bennet and cosponsor the Dream Act to provide certainty to the thousands of law-abiding Coloradan Dreamers and demonstrate bipartisan leadership on this important issue. I have long called for an overhaul of our country’s immigration system and believe this is an important step. I will continue to work with Senator Bennet and our colleagues in the Senate to move this bill forward into law.Flake was part of the Gang of Eight disaster and is now leaving the Senate because his polls are so poor.

When asked about Durbin’s plan, Gardner’s office gave an evasive answer to TheDenverChannel.com:

“Senator Gardner is a sponsor of the Dream Act, so of course that’s the legislation he would like to be signed into law – that’s why he sponsored it. However, his top goal is to find a bipartisan solution that allows children who came to this country without documentation, through no fault of their own, have the opportunity to remain here lawfully,” Gardner’s spokesman, Casey Contres, told Denver7. “He’s open to many different solutions that will continue to be discussed that achieve that goal.”

Other GOP Senators denied any role when Breitbart asked them if they were working with Durbin. “That is absolutely not true,”  said Megan Taylor, a spokeswoman for Nevada GOP Sen. Dean Heller. “That is not accurate,” said Brook Ramlet, a spokeswoman for Iowa Sen. Joni Ernst.

GOP Sen. Lindsey Graham created the Gang of Eight in late 2012 and is now working with both rivals groups headed by Grassley and Durbin. When recently asked about Grassley’s plan — which only offers three-year work permits to 690,000 DACA illegals — Graham insisted that the larger population of 3 million younger illegals must get citizenship.

Lindsey Graham says he won’t support a #DACA bill that doesn’t include a path to citizenship. If the Grassley/Cornyn bill introduced yesterday included the #DreamAct instead of the Bridge Act, then “you’re well on your way to a deal,” he said.

Arizona Sen. Jeff Flake was part of the original 2013 Gang of Eight, but his poll numbers fell so far that he has announced he is not running for reelection in 2018.

Sen. Marco Rubio’s office did not respond to questions from Breitbart News about possible talks with Durbin. His presidential hopes were destroyed by his support of the Gang of Eight deal which would have reduced Americans salaries while increasing Wall Street stock-values, according to a 2013 report by the Congressional Budget Office.

Grassley’s immigration group include Graham, Sen. John Cornyn, Sen. Thom Tillis, Sen. Devid Perdue and Sen. Tom Cotton. But the group is split. For example, Cornyn has called for a slow phase-out of chain migration, and Tillis is urging passage of his SUCCEED amnesty for at least 1 million illegals.

Multiple polls show the public is strongly opposed to the Democrats’  threat to shut down the government if they do not get their DREAM Act amnesty by Christmas for 3 million illegals –plus their at-home chain-migration relatives.

The Democrats’ calls for amnesty are unpopular because they contradict Americans’ sense of fairness to other Americans. Business groups and Democrats embrace the misleading, industry-funded “nation of immigrants” polls which pressure Americans to say they welcome migrants. But the alternative “fairness” polls show that voters put a much higher priority on helping their families, neighbors, and fellow nationals get decent jobs in a high-tech, high-immigration, low-wage economy. The political power of the voters’ fairness priorities was made clear during the GOP primaries and again in November 2016.