Tells of millions of Americans are likely to get 4 percent wage raises this year, likely helping President Donald Trump and his pro-American immigration policy win a huge political victory in the 2018 midterm elections.

But establishment GOP leaders want their congressional tax cuts to get the credit for wage increases, even though the expected pay raises are only possible because Trump’s immigration policies pressure companies to hire Americans at higher wages instead of hiring more immigrants at lower wages.

“Scott Jennings, a Republican political strategist and former McConnell aide … and other McConnell allies say the party can focus on selling a still-unpopular tax law to the American public and picking up Senate seats in states President Donald Trump won in 2016.

As the economy continues to grow, and as the labor market continues to tighten … we are going to see real wage pressure in here. I’ve been telling you for the last year that the one disappointing number that we’ve seen month after month after month is [low] wage growth… That’s just not good enough, and we are committed to get real wage growth in-country, and we do believe you will see it over the course of the next year or two.

The stakes are high because Trump’s pro-American immigration agenda will get the credit if the public recognizes that reduced immigration raises Americans’ wages, regardless of the additional gains from middle-class tax cuts. If voters recognize the tie between rising wages and declining immigration, then the GOP may make gains in the House and Senate — and force Democrats’ to accept Trump immigration reforms in 2019.

“Presumably a lot of things are responsible, but less immigration and the expectation for tighter enforcement are probably helping to bump up wages,” said Mark Krikorian, director of the Center for Immigration Studies. He continued:

It seems rising wages are almost certainly going to be helping the Republicans in the November elections. Whether it will help enough to stem Democratic gains is unclear — but it is definitely going to help. My concern is that too many Republicans will see rising wages as a reason to loosen immigration rules … [even though] from the perspective of the Trump administration, it is an opportunity to pull millions of [unemployed] working-age people back into the world of work.

So far, Trump’s immigration policies are popular because the public recognizes they are intended to help Americans, not companies, investors, and migrants.

But if the public can be pushed to credits their rising wages to the GOP’s tax cuts, but not immigration, then both Democrats and the GOP’s business-first wing may be able to block Trump’s immigration agenda in 2019. According to a Washington Post reporter:

There is a widespread belief among D sources that congressional Rs are eager to head into midterms running on tax bill, not as party that engaged in showdown over dreamers. That's where Ds see leverage. And they are ready to ask, "Wasn't Mexico supposed to pay, not taxpayers?"

Several years of after-inflation wage increases would be a massive change in the nation’s economy, which has largely aided investors — not wage-earners — since the mid-1970s.  For example, Americans’ wages have been flat since the mid-1970s, while the investors have gained enormously as the stock market rose, according to the U.S. Census Bureau.

So far, Trump is shaking off GOP pressure to discard his wage-boosting immigration priorities. For example, this weekend, he insisted that Democrats have to back his immigration priorities if they want to get work-permits for the 700,000 ‘DACA’ illegals. On Monday, he ended TPS status for 200,000 migrants from El Salvador. His deputies are pressure companies which employ roughly 1 million foreign white-collar employees via the huge H-1B and L-1 programs.

"We want the wall. The wall is going to happen or we're not going have DACA. We want to get rid of chain migration & lottery system..We need additional border security" -Pres Trump on immigration. "We all want DACA to happen but we also want great security for our country." pic.twitter.com/haBQR3sGU6

The December jobs report prompted several analysts to predict strong wage gains in 2018. Some of the gains come from the 18 states where minimum-wage laws have been enacted, but other gains come as employers start to compete with each other for skilled workers.

“By spring and summer, I think you’ll see a lot more action from companies on wages” and more training, DS Economics’ Swonk said. “I think this is the pivotal year. It’s good news for workers.”

CEOs are complaining they can’t find enough good workers to fill all of their job openings. Talented workers have largely figured out that the best way to get a raise in this economy is to change jobs. ADP, a company that processes payroll for many of America’s largest corporations, tracks wage and salary data. For years, ADP has pointed out that people who change jobs get a bigger pay bump than people who stay put.

If CEOs don’t want their best workers to leave, they are likely going to have to pay more.

“The increase of average hourly earnings at a 2.5 percent rate on a year ago basis likely understates the true pace of wage and compensation growth due to a tight labor market,” said Joe Brusuelas, chief U.S. economist at RSM.

“With the major narrative going forward is likely to be where firms will get the skilled workers necessary to boost productivity and meet demand it is likely that wages will accelerate in 2018,” he added. “With wage gains in metro areas starting to pick up, and minimum and livable wages slated to rise starting in January we think that wages and overall compensation will accelerate in 2018 reaching 4 percent by the end of the year.”

Economists are optimistic that annual wage growth will top 3.0 percent by the end of this year. The December employment report incorporated annual revisions to the seasonally adjusted household survey data going back five years …

Economists believe the jobless rate could drop to 3.5 percent by the end of this year. That could potentially unleash a faster pace of wage growth and translate into a much stronger increase in inflation than currently anticipated.

In areas where unemployment has dipped below the national rate, pay has begun to accelerate. Cities where joblessness is 3.5 percent or lower have had an impressive 4 percent year-over-year increase in earnings, said Ian Shepherdson, chief economist of Pantheon Macroeconomics.

In Indianapolis, where unemployment reached 3.1 percent in November, wages for jobs in the private sector rose by nearly 5 percent in the second quarter compared with a year earlier.

Truck drivers are getting wage increases, according to the New York Times:

Bob Peterson, the chief executive of Melton Truck Lines, said he had no choice but to increase pay for his 1,600 drivers this year. “With unemployment this low, anyone worth their salt has got a job and probably a darn good one,” Mr. Peterson said. Melton operates in 48 states and has offices in five …

Mr. Peterson has not given out raises in two years, he said, because when he has asked his clients to increase their rates, they have threatened to hire another trucking company. He is planning to increase salaries by 10 percent in 2018.

Construction workers are also gaining, according to Bloomberg: 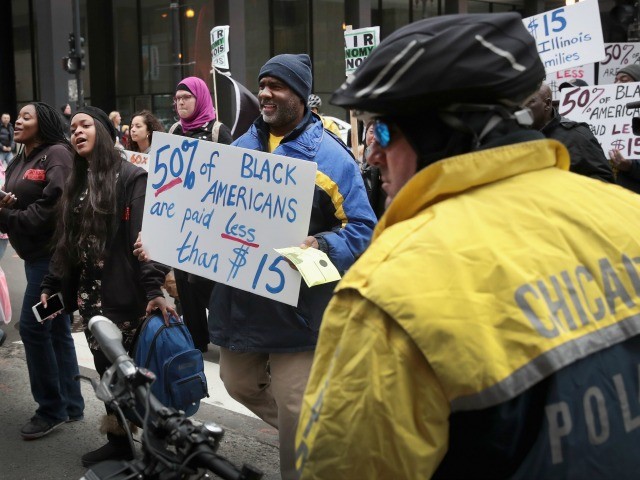 Tax reform will drive economic growth and create good-paying jobs. In fact, we will increase our U.S. investment and pay a special bonus to our U.S. employees.

But that opposition to wage increases may crumble as Trump continues to enforce immigration law. For example, 300,000 ‘DACA’ work permits for illegals expire before November, and enforcement officials have visited companies to penalize executives and investors who hire illegals.

The gains from any wage-competition will be offset by inflation, now running around 2 percent.

Also, the pressure on companies will be reduced if the hidden army of nine million non-working American men begins to look for work after years of staying out of the job market.

Nine million American men have been pushed out of the workforce by the federal government's policy of lowering wages, says Obama economist. But he can't mention the cause — the federal policy of goosing economic growth via cheap-labor immigration. https://t.co/OUs2C2idNT