Pope Francis called for the condemnation of “fake news,” while urging journalists to break monopolies that present just one version of the story.

“In today’s fast-changing world of communications and digital systems, we are witnessing the spread of what has come to be known as ‘fake news,’” the pontiff lamented in a powerful address Wednesday, while suggesting that homogeneous news sources without the necessary competition promote disinformation.

“Disinformation thus thrives on the absence of healthy confrontation with other sources of information that could effectively challenge prejudices and generate constructive dialogue,” the pope said. “Instead, it risks turning people into unwilling accomplices in spreading biased and baseless ideas.”

In his message for the 52nd World Day of Social Communications, titled “The Truth Will Set You Free: Fake News and Journalism for Peace,” Pope Francis joined the growing movement against fake news that disregards the facts and spreads ideology instead, insisting that it was Satan himself who “created the first fake news.”

“Spreading fake news can serve to advance specific goals, influence political decisions, and serve economic interests,” he said. “The effectiveness of fake news is primarily due to its ability to mimic real news, to seem plausible.”

The pope said that the lies concealed by fake news are not always easy to uncover “since disinformation is often based on deliberately evasive and subtly misleading rhetoric and at times the use of sophisticated psychological mechanisms.”

“We need to unmask what could be called the ‘snake-tactics’ used by those who disguise themselves in order to strike at any time and place,” he said. “This was the strategy employed by the ‘crafty serpent’ in the Book of Genesis, who, at the dawn of humanity, created the first fake news.”

In a curious coincidence, the pope’s message has come out contemporaneously with new studies revealing the depths of mainstream media bias in the United States and elsewhere.

A Pew survey from late 2017 revealed that only 5 percent of media coverage about President Trump was positive during his first year in the White House, while 62 percent was negative. As a comparison, during President Barack Obama’s first year, 42 percent of media coverage was positive and only 20 percent negative—despite the fact that he was trying to do something extremely unpopular with healthcare at the time.

“Compared to other recent presidents, news reports about President Trump have been more focused on his personality than his policy, and are more likely to carry negative assessments of his actions,” NPR noted in its coverage of the Pew report. 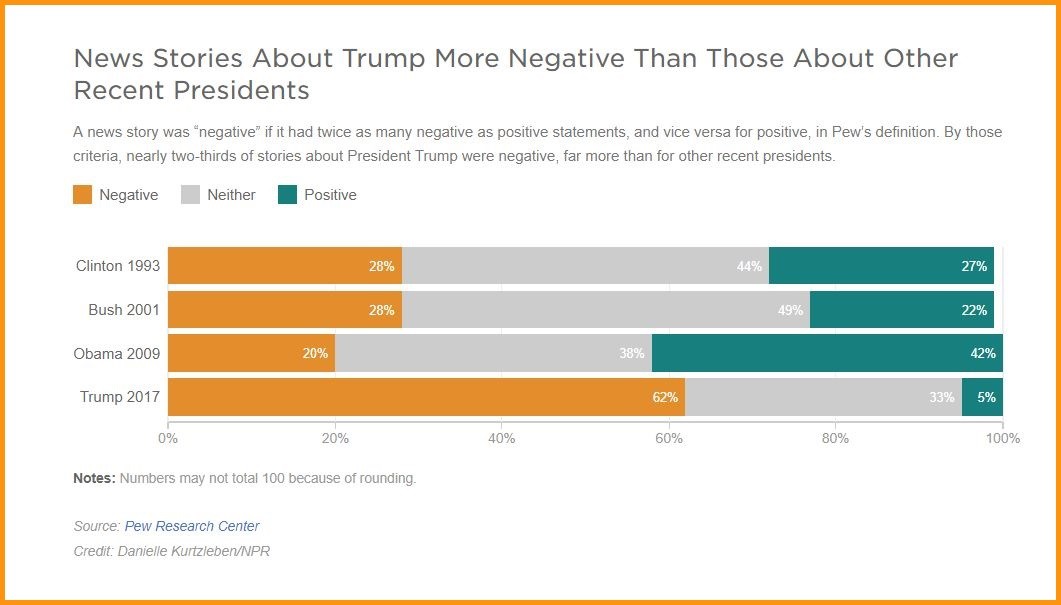 As a recent essay suggests, this tremendous media bias has led to a series of paradoxes in American society. “Unemployment is at 4.1 percent, consumer confidence is at a 17-year high, wages have risen for middle-class workers, worker 401(k)s are flush, and crime levels hover at near 30-year lows,” Lee Habeeb states in The Federalist. “Yet only 38 percent of the American people thinks the country is on the right path and only 24 percent think the new GOP tax cuts are a good idea, while 42 percent believe they’re a bad idea.”

When people get their information from biased sources that cover just one angle of certain stories while ignoring other important stories altogether, the result is a skewed view of reality.

“Folks get their news and cultural cues from a media that leans left, with movies, sitcoms, talk show hosts, and sports entertainment all serving as an almost de facto extension of one ideological faction,” Habeeb added.

“The capacity to twist the truth is symptomatic of our condition, both as individuals and communities,” the pope said in his new message, comparing misleading communication to the biblical stories of Cain and Abel and the Tower of Babel.

Francis said that the aim of his message was “to contribute to our shared commitment to stemming the spread of fake news and to rediscovering the dignity of journalism and the personal responsibility of journalists to communicate the truth.”

Fake news “refers to the spreading of disinformation on line or in the traditional media,” he said. “It has to do with false information based on non-existent or distorted data meant to deceive and manipulate the reader.”

“Fake news is a sign of intolerant and hypersensitive attitudes, and leads only to the spread of arrogance and hatred. That is the end result of untruth,” he said.

The pope also insisted that “there is no such thing as harmless disinformation” since “trusting in falsehood can have dire consequences.”

“Even a seemingly slight distortion of the truth can have dangerous effects,” he said.

Francis appealed for more widespread “education for truth,” which involves “teaching people how to discern, evaluate and understand our deepest desires and inclinations, lest we lose sight of what is good and yield to every temptation.”

“The truth will set you free,” he said, citing Jesus Christ’s words to the Roman procurator, Pontius Pilate.

The best way to defend ourselves against fake news, he added, is through access to the truth. “The most radical antidote to the virus of falsehood is purification by the truth,” he said, which goes beyond information to a life lived in conformity to the truth.

“The best antidotes to falsehoods are not strategies, but people: people who are not greedy but ready to listen, people who make the effort to engage in sincere dialogue so that the truth can emerge; people who are attracted by goodness and take responsibility for how they use language,” he said.

Calling journalists, “the protectors of news,” Francis said that their vocation is “not just a job; it is a mission.”

“That is why ensuring the accuracy of sources and protecting communication are real means of promoting goodness, generating trust, and opening the way to communion and peace,” he said.