As Italians file into the voting booth for national elections Sunday, they are carrying copies of Steve Bannon’s first-hand analysis of Italian politics thanks to a frontpage article in the Corriere della Sera, Italy’s most popular newspaper.

In a remarkably straightforward piece by veteran journalist Viviana Mazza, Bannon’s voice can be heard without the usual snarky, tendentious commentary of American mainstream media, conveying a message of a “populist revolt” that resonates with Italy’s disaffected masses.

Ostensibly in Rome as an “observer” of Sunday’s historic elections, Mr. Bannon says he feels “the same pre-Trump climate” that reigned in the United States in the lead-up to the 2016 election. Europe, he said, is now “the vanguard of populism,” with strong nationalist movements emerging in virtually every nation in the 28-member bloc of the European Union.

Among these nations, Italy holds a “crucial” place, Bannon asserts, and Sunday’s elections provide a “fundamental test case of the power of sovereignty.” Armed with recent data and statistics, Bannon notes that some 65 percent of the Italian population is now aligned with anti-establishment parties and movements, a radical shift from just a decade ago, when the leftist Democratic Party (PD) governed virtually without opposition.

Italy’s frustration with the status quo has been building for several years, fueled by a devastating economic crisis that has eroded Italians’ standard of living as well as mass migration that has flooded the country with unassimilated newcomers who depend on the country’s welfare system for their survival.

Just as happened in America, Bannon says, in Italy certain messages resonate with the people, while “eluding the elites.” Italians, he said, “want their sovereignty back.” 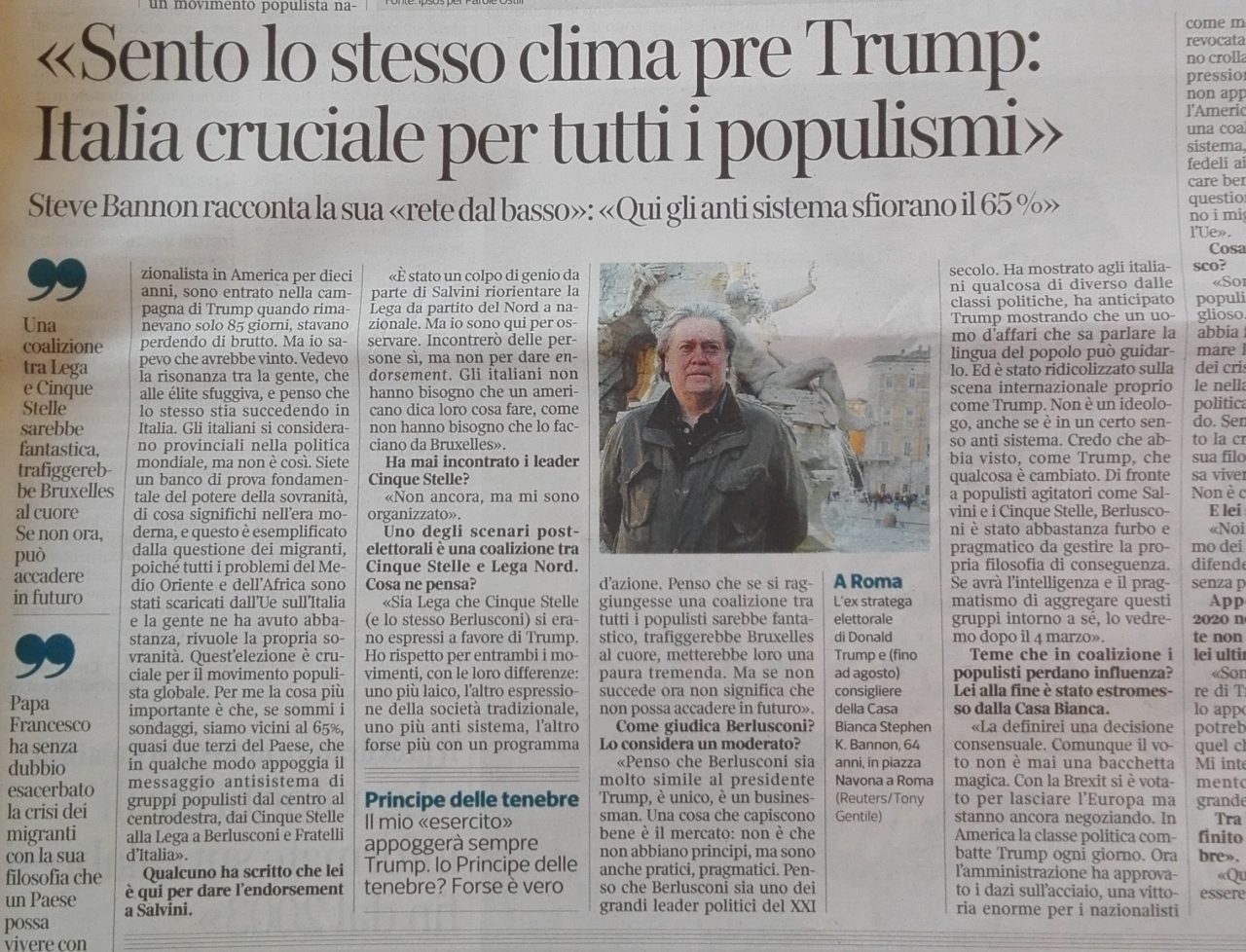 Bannon makes it clear that (contrary to uninformed conjecture) he is not in Rome to endorse any single candidate or party in the elections, but rather to lend his support to the growing anti-establishment and Euro-skeptic movement that cuts across party lines.

In this sense, he praises the League’s Matteo Salvini for his “stroke of genius” in reinventing his party as a national contender instead of a regional fringe group, while also lauding the young Five-Star movement that represents a completely different sort of anti-establishment populism. He even has kind words for Silvio Berlusconi, saying he is “very similar to President Trump” with a unique and important perspective as a businessman, and a gift for pragmatism.

“Both the League and the Five-Star Movement (and Berlusconi himself) came out in favor of Trump,” Bannon said. “I have respect for both movements, with their differences: one more secular, the other an expression of the more traditional society; one more antisystem, the other perhaps more with a clearer plan of action.”

“I think that a coalition among all the populists would be fantastic,” he added. “It would pierce Brussels through the heart and terrify them. But even if it doesn’t happen now this doesn’t mean it can’t happen in the future.”

Even if populists do win out in Sunday’s elections, Bannon said, this doesn’t mean change will come overnight.

“The vote is never a magic wand,” he said. “With Brexit, the British voted to leave Europe but that is still being negotiated. In America, the political class fights against Trump every day.”

“When you form a coalition, sometimes the system wins,” he said, “but the key is to stay true to your principles and take your own shots. Here the central issues to be negotiated will be immigration question and the relationship with the EU.”

When asked whether he would ever consider running for office himself, Bannon brushes off the idea. “We street fighter don’t make good politicians,” he said. “I like to defend my convictions without mincing words.”

His evaluation of Pope Francis, on the other hand, is nuanced.

“I am a proud nationalist, populist and Catholic,” he said. “I do not believe that the Church has done enough to stop the global persecution of Christians. The Pope is infallible in doctrine but not in Church and world politics. No doubt his open-borders philosophy has exacerbated the migrant crisis.”

Regarding whether or not he will support Trump in a 2020 bid for reelection, Bannon is unequivocal.

“I am a great supporter of Trump, and my ‘army’ will always support him,” he said. “I’m only interested in the helping the movement of economic nationalism to grow bigger and stronger. I could not care less what people say about me.”

In fact, asked about one of his nicknames as the “Prince of Darkness,” Bannon does not demur.