As House Speaker Paul Ryan (R-WI) announced that he will retire from public office after his last term in the House, the leader of the globalist wing of the Republican Party is set to leave behind a legacy that ignored America’s working and middle class, while serving up an agenda favored by billionaires Charles and David Koch.

This year — days after Ryan successfully prioritized tax cuts ahead of President Trump’s popular immigration reduction agenda — the Koch brothers donated about half a million to Ryan’s campaign committee.

Ryan’s brand of Republicanism is reliant on pushing unpopular tax and entitlement reform agendas, as when, in 2016, the House Speaker told American workers that tax cuts — not penalties for multinational corporations — were necessary to stop the massive outsourcing of U.S. jobs to third world nations.

The Koch brothers, staunch advocates of mass immigration, geared up alongside Ryan’s tax cuts and the two have marched in lockstep together opposing Trump’s populist fair trade agenda, where he has placed tariffs on steel and aluminum imports, as well as on Chinese imports, to help rebuild America’s depleted manufacturing base.

Charles Koch most recently said that he and his brother’s network of organizations were “working hard against” Trump’s trade agenda.

“We’re working hard against all these other protectionist trade barriers that are just different forms of corporate welfare which, other than a few special interests, will make Americans worse off,” Koch said.

Ryan, like the Koch brothers, came out of the gate opposing Trump’s fair trade agenda, denouncing the plan by saying he was “extremely worried” about a mainstream media-hyped “trade war.”

Wisconsin voters, Ryan’s constituents, have been opposed to the House Speaker’s free trade as religion, with a majority telling pollsters in 2016 that free trade was responsible for taking U.S. jobs away from them. The poll revealed that only 33 percent of Republican voters said free trade creates jobs in the U.S. 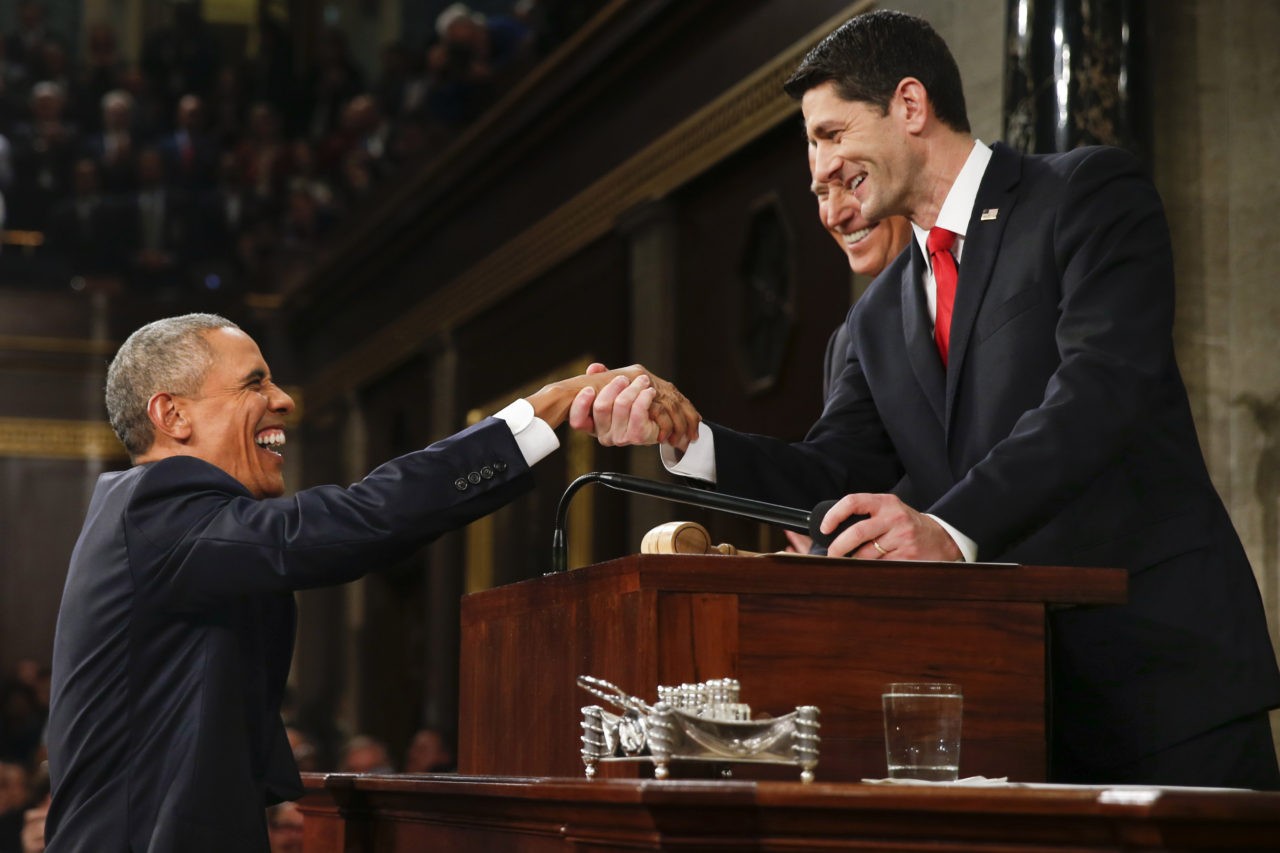 President Barack Obama shakes hands with Speaker of the House Paul Ryan (R) as Vice President Joe Biden looks on before the State of the Union address to a joint session of Congress on Capitol Hill January 12, 2016 in Washington, D.C. In his final State of the Union, President Obama is expected to reflect on the past seven years in office and speak on topics including climate change, gun control, immigration and income inequality. (Photo by Evan Vucci – Pool/Getty Images)

Meanwhile, Ryan has credited his tax cuts for Trump’s economic success. Republican voters, though, have repeatedly said that tax reform is not a priority for them. The biggest priority for GOP voters, month after month? Reducing immigration, an initiative supported by Trump but opposed by Ryan and the Koch brothers.

Reducing immigration was a bigger priority for GOP voters than tax cuts, repealing Obamacare, getting the U.S. out of the Iran Deal, destroying ISIS, and expanding family leave.

Immigration is so important to Republicans that it even surpasses the economy and jobs as being the biggest issue.

Supporters of President Trump’s say reducing immigration should be the second biggest priority for the White House, just after stimulating American jobs.

Nonetheless, the Koch brothers have remained opposed to cutting the current inflow of low-skilled foreign nationals to the country, where more than 1.5 million illegal and legal immigrants enter the U.S. every year.

Even in Ryan’s retirement announcement, he did not mention any plans for the Republican-controlled House to push Trump’s popular agenda of immigration reduction. Instead, Ryan said he would “keep at it” on trying to cut entitlements for Americans as foreigners continue pouring into the country.

Paul Ryan just doubled down on cutting Medicaid, Medicare and Social Security. "The House passed the biggest entitlement reform bill Congress has ever considered last year, so we're just going to have to keep at it on entitlements." pic.twitter.com/Vo08lHtcsv

With Ryan’s agenda to push entitlement reform just ahead of the 2018 midterm elections, the Koch brothers are investing up to $400 million in trying to get globalist-friendly GOP candidates elected to Congress who will vote to continue mass immigration to the U.S. About $20 million of the Koch funding will go towards selling Ryan’s tax reform.

Ryan’s tax cuts, while getting more money back in the pockets of Americans, does not have a lasting impact on voters. Last month, 50 percent of swing voters told pollsters that the tax reform legislation would have “no impact” on their decision as to whom to vote for. Immigration, for swing-voters, remains more important to their midterm election vote than tax reform.

Still, Ryan’s control of the House has put the Trump administration in a bind when it comes to pushing their popular immigration reform agenda, which not only includes reducing immigration, but building a wall along the U.S.-Mexico border and ending the Diversity Visa Lottery program which imports 50,000 random foreign nationals every year.

In the most recent spending bill, signed by Trump, Ryan worked with Democrats to expand the number of low-wage foreign workers entering the U.S. for the big business lobby. The spending bill also did not include any border wall funding, increased the “Catch and Release” program that allows illegal aliens to be released into the interior of the U.S., and did not add any new deportation agents to help deport illegal aliens living across America.

Trump, though he signed the spending bill, called it a “ridiculous situation” – a blow to Ryan’s speakership.

The Koch brothers’ biggest critique of the spending bill, unsurprisingly, was that it did not include amnesty for illegal aliens.