Nearly one hundred years ago, on June 6, 1918, a small group of American Marines became a living legend. It was the bloodiest day in U.S. Marine Corps history until that time and would become an integral part of the lore passed down to every Marine recruit. 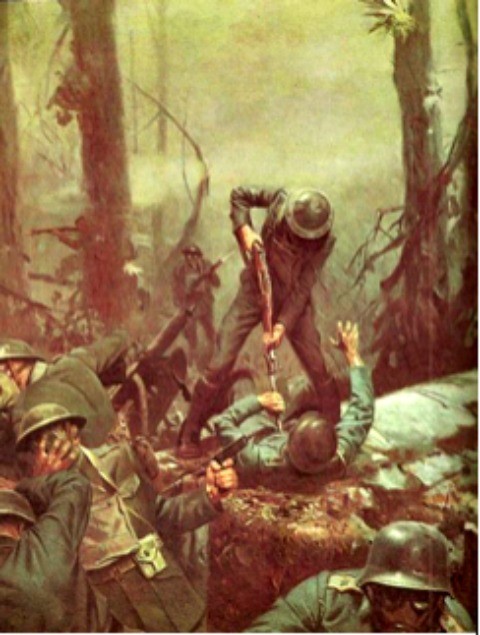 On that day, World War I Allied commanders ordered the 5th and 6th Marines to advance through a field of wheat and take Belleau Wood, a French forest where thousands of German soldiers lay in wait. As the first leathernecks stepped out into the open, enemy machine gunners immediately began shooting tens of the thousands of rounds, mowing down the advancing Americans in waves.

Sensing that the men behind him might falter in the face of such devastating fire, a 44-year-old first sergeant named Dan Daly stepped forward and yelled words that would be forever etched in Marine Corps history: “Come on, you sons-o’-bitches! Do you want to live forever!?”

The story of that fateful day and Daly’s role in the fighting is retold in a new bestselling book, The Unknowns: The Untold Story of America’s Unknown Soldier and WWI’s Most Decorated Heroes Who Brought Him Home by Patrick K. O’Donnell. Released in May, The Unknowns follows eight American heroes who accomplished extraordinary feats in some of the war’s most important battles. As a result of their bravery, these eight men were selected to serve as Body Bearers at the ceremony where the Unknown Soldier was laid to rest at Arlington Cemetery.

On the first day of June 1918, the German Army was in the midst of unleashing an overwhelming offensive directed at Paris and potentially change the course of the war. Months earlier, Russians had surrendered the Eastern Front, leaving the Germans free to concentrate their forces on the trenches on the Western Front.

The Kaiser’s plan was working. The German forces had steamrolled through French villages and towns, and by June 1, they had advanced into Belleau Wood, which lay about 40 miles from Paris and ultimate victory. The French forces who had been defending the area had largely melted away. One of the French generals explained, “Overwhelmed by numbers, they evaporated immediately like drops of rain on a white-hot iron.” To the many French soldiers caught in the onslaught, the war seemed to be all but over.

But the war was just beginning for the U.S. Marines and First Sergeant Dan Daly.

A battle-hardened veteran, Daly had already distinguished himself fighting in the Philippines, Santo Domingo, Peking (Beijing), and Veracruz, Mexico. A true badass, Daly had single-handedly defended the Tartar Wall in Peking during the Boxer Rebellion in 1900. Against hundreds of armed “Boxers,” anti-foreign and anti-Christian Chinese nationalists who believed their bodies could not be harmed by bullets, Daly alone guarded the wall outside the American consulate. For an entire day and night, Daly defended his position, beating back everyone who attempted to storm the building. The feat was all the more impressive for the fact that Daly was less than imposing physically, standing just five-foot-six and weighing around 130 pounds.

On another occasion, Daly and 35 other Marines found themselves in a walled compound in Haiti surrounded by 400 Caco bandits, peasant revolutionaries, and mercenaries. The Americans had lost their machine gun in the river earlier in the day, leaving them badly outgunned. In the middle of the night, Daly managed to slip through the enemy forces, avoid the patrols, dive into the river and recover the gun. He then lugged the heavy weapon back to the compound, where he used it to train a torrent of death on the opposing forces.

For these accomplishments and others, Daly already had two Medals of Honor and a host of other decorations when he stepped into that wheat. (He is one of only 19 men to have received the Medal of Honor twice.) His words — and example — inspired his company of 200 men to follow him, despite the tremendous enemy fire.

They charged into the wheat and then the forest, Daly in the lead. Coming upon a German machine-gun nest, the sergeant drew his .45 Colt automatic pistol and hurled himself into the emplacement. All alone, he killed or captured all the soldiers inside, using only his pistol and grenades.

Before the day was over, 31 officers and 1,056 Marines fell to German fire. It was their equivalent of D-Day in World War I. When night fell, they had established only a toehold in the heavily fortified woods.

The battle took on epic proportions. The Germans rushed their best units into the battle to crush the Marines and the US Army 2nd Division (Regulars), to which Daly and the 4th Marine Brigade were assigned.

Over the coming weeks, the Marines relentlessly pummeled the enemy forces and sustained withering counterattacks. When ammunition ran low, they resorted to bayonets and even their fists to fight. Finally, on June 26, the commanding officer on the scene relayed a simple message to headquarters: “Woods now U.S. Marine Corps entirely.”

The effort cost the Americans dearly. Daly himself was one of the thousands wounded, although he would recover and fight in more battles. For his efforts at Belleau Wood, his superior officers recommended him for his third Medal of Honor. However, the brass decided that three Medals of Honor was too many for any one man and instead awarded him the Navy Cross.

Official casualty counts for the battle record more than 1,800 Americans killed. Many of their bodies were never identified, and they were laid to rest in the Aisne-Marne American Cemetery, one of four cemeteries from which candidates to be the Unknown Soldier were drawn. In fact, it’s possible that the first Unknown Soldier buried in the American monument was a Marine who fought at Belleau Wood.

Astounded by the bravery and tenacity of the Americans, the French renamed Belleau Wood “Bois de la Brigade de Marine” (“Wood of the Marine Brigade”), and the site later became an American battle monument. At the dedication ceremony, Army Major General James. G. Harbord, who commanded the Marines during the battle, delivered a tribute that remains moving a century later:

“Now and then, a veteran, for the brief span that we still survive, will come here to live again the brave days of that distant June. Here will be raised the altars of patriotism; here will be renewed the vows of sacrifice and consecration to country. Hither will come our countrymen in hours of depression, and even of failure, and take new courage from this shrine of great deeds.”

Like the monument, Daly’s example stands as a shrine to inspire the next generation of Americans to stand true and fight for their principles. One of his peers described Daly as “the fightingest Marine I ever knew,” and none other than Major General John Lejeune called him the “greatest of all leathernecks.” On this centennial anniversary of World War I, it seems more than fitting to recall and celebrate this true American badass.

Patrick K. O’Donnell is a bestselling, critically acclaimed military historian and an expert on elite units. He is the author of eleven books. The Unknowns is his newest, which will be released in May. He will be signing copies of the book in the Commonwealth Salon at the Boston Public Library in Copley Square on May 14 at 6 p.m. O’Donnell served as a combat historian in a Marine rifle platoon during the Battle of Fallujah and speaks often on espionage, special operations, and counterinsurgency. He has provided historical consulting for DreamWorks’ award-winning miniseries Band of Brothers and for documentaries produced by the BBC, the History Channel, and Discovery. PatrickkODonnell.com @combathistorian