The night before the midterm elections, House Speaker Paul Ryan touted “tax reform 2.0,” the economy, and the rebuilding of the United States military as the agenda accomplishments of the Republican-controlled Congress.

“Frankly, our members feel pretty good because they have a really good message … I mean look at what we’ve just been able to achieve in Congress with the President in the last two years,” Ryan told Fox News’ Bret Baier. “A record economy, the military being rebuilt, people feeling better about things … wages growing faster than they have since before the recession.”

The accomplishments of the GOP Congress, though, have been slim with Ryan in charge. Despite President Trump winning the 2016 presidential election with a populist message on healthcare and a nationalist message on immigration, Ryan and the Republican Congress failed to deliver reforms on either of the issues.

That failure was evident in the midterm elections Tuesday night as Democrats regained control of the House running on the talking point that Republicans have been unsuccessful in bringing down the cost of healthcare.

In the first year of Trump’s presidency, no immigration plan was coordinated and the populist initiative that the president touted on healthcare — allowing Americans to buy plans across state lines — quickly fell apart in the House and Senate when Republicans did not have the votes to replace Obamacare.

A handful of healthcare reforms were enacted, mostly by Trump through regulation changes and an executive order, but Republicans were unable to coalesce a national message around their subtle reforms. This ultimately led to individual Republicans having to defend themselves against attacks that they would strip away protections for Americans with pre-existing conditions.

The only major piece of legislation in the two years of Ryan’s speakership under Trump came in the form of tax cuts — which since its passing has become increasingly unpopular. 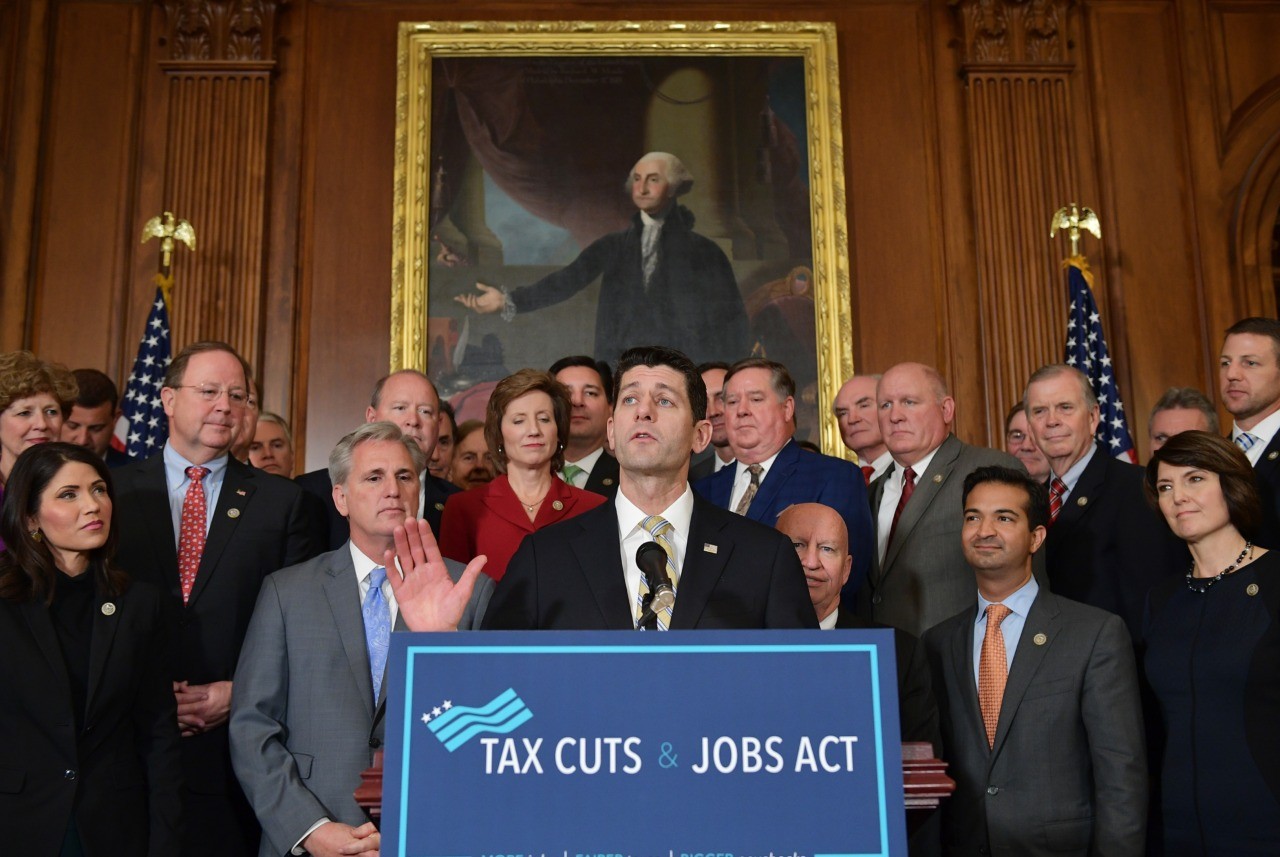 House Speaker Paul Ryan speaks after the House passed its version of the tax overhaul in the Rayburn Room of the US Capitol on November 16, 2017 in Washington, DC. (MANDEL NGAN/AFP/Getty Images)

Last year, the White House released an extensive list of immigration principles that the administration was looking for the GOP Congress to adopt with legislation.

Trump’s manifesto included full funding for a border wall, making E-Verify mandatory to stop illegal hiring, ending the process of “chain migration” that has driven mass legal immigration to the country, and ending the unpopular Diversity Visa Lottery which gives out 50,000 visas every year to a random selection of foreign nationals.

Even with a terrorist attack suspected to have been committed by a foreign national who arrived in the U.S. on the Visa Lottery program, Ryan’s GOP Congress did not make any reforms to the country’s immigration system.

Thus, the first year of Trump ended with no successful legislative agenda from Ryan and the Republicans on immigration or health care.

Months later, in April of this year, the Republicans came upon a moment to secure full funding for Trump’s proposed border wall. The omnibus spending bill presented an opportunity for Trump’s pro-American immigration reforms.

Yet again, the effort failed with the leadership of Ryan.

Instead, the omnibus spending bill only gave Trump $1.6 billion for his border wall and barred him from building a wall using the prototypes that the Department of Homeland Security (DHS) had been testing in the San Diego desert. The omnibus spending bill has relegated Trump to building new border wall barriers of the same materials used by the Bush and Obama administrations.

During the Fox News interview the night before the midterms, Ryan noted Democrats’ campaign to abolish the Immigration and Customs Enforcement (ICE) agency.

But, the omnibus spending bill did not fund the 1,000 new ICE agents that Trump had asked and allowed for more Catch and Release at the border by not funding adequate detention space for border crossers and asylum seekers to be housed in while they await their hearings.

Ryan did not thwart the discharge petition, nor did he have funding pulled from the congressional members involved with the petition. Many of those DACA amnesty House Republicans lost in the midterms, including Rep. Carlos Curbelo (R-FL) and Rep. Mia Love (R-UT).

The billionaire Steve Schwarzman who convinced Trump for months not to end the DACA program is one of the largest donors to the Congressional Leadership Fund (CLF) which is closely aligned with Ryan.

Between March and October, the eight months leading up to the midterm elections, immigration became the number one priority of GOP voters, conservatives, and Trump supporters. Tax reform was consistently one of the lowest priorities of voters.

Among all U.S. voters, health care and immigration were the biggest issues facing the nation.

For Ryan, the health care and immigration priorities of Americans continued to be of no concern to him as he refused to sway from his economic libertarian agenda despite there being no support for such a plan even amongst his own constituency.

“The one thing that got away from us, which is my signature issue, is entitlement reform,” Ryan said in an April interview. 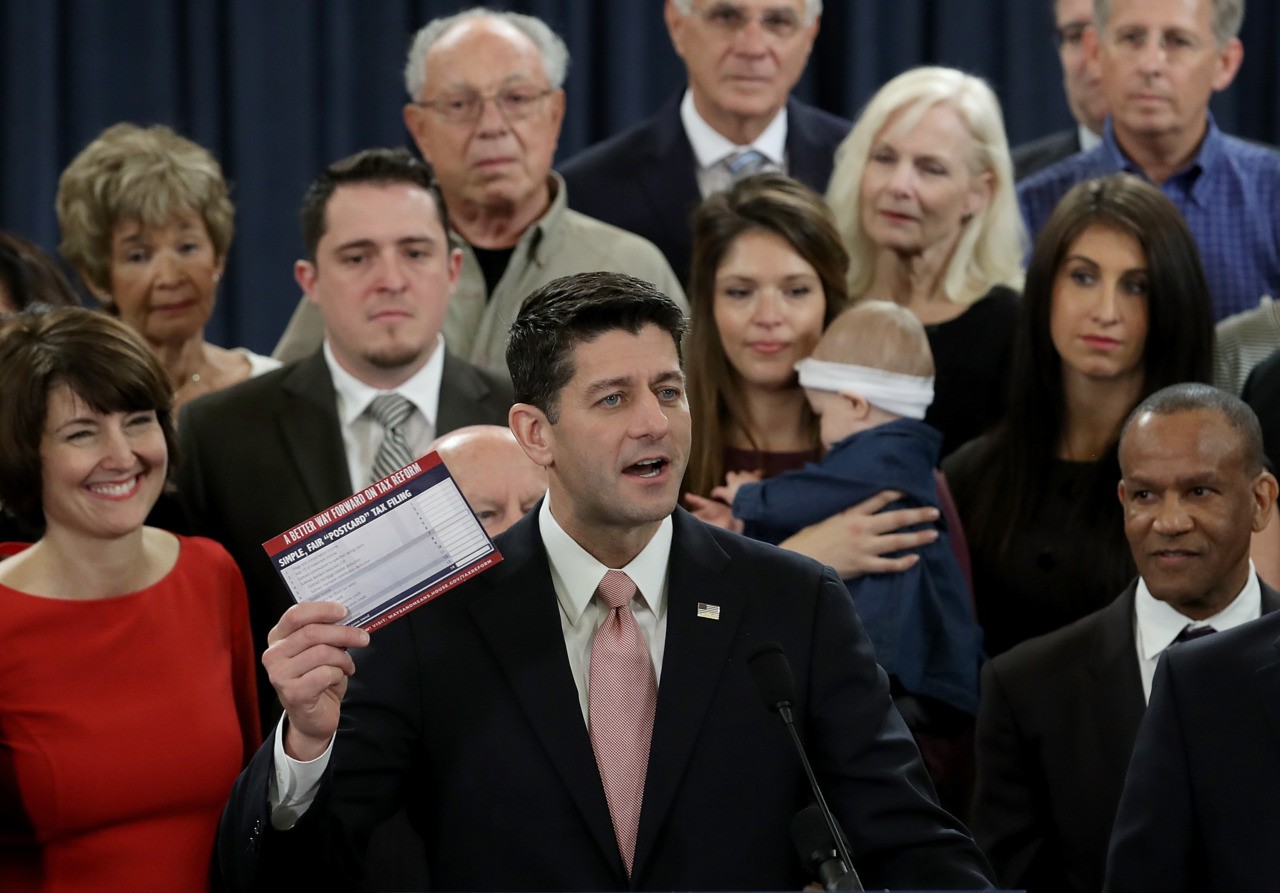 In an exclusive interview with Breitbart News in May, Trump adviser Stephen Miller said immigration would be the leading issue heading into the midterm elections. Trump, likewise, increasingly shifted his midterm election message away from tax cuts and towards immigration.

Still, Ryan and the Republican establishment focused their attention on tax reform and their disdain for Obamacare despite providing no legislative track on the issue.

“And the Democrats are talking about rolling back and raising taxes, more spending, they’re proposing basically to undo all the progress we’ve been having,” Ryan said in his last interview before the midterm elections. “And they want socialized medicine which would be a disaster for our country plus a $32 trillion tax increase to pay for it.”

Then, with the latest defense spending bill, Trump’s border wall was ignored once again despite voters’ brewing frustration that the president’s nationalist immigration agenda was being held up by his own party in Congress.

The final days leading up to the midterm elections, Trump ignited his base and swing voters by raising the issue of birthright citizenship where the U.S.-born children of illegal aliens are given automatic U.S. citizenship. The policy has resulted in an anchor baby population of at least 4.5 million with nearly 300,000 being rewarded with citizenship every year.

Ryan punted the issue, telling local media that Trump did not have the authority to end the anchor baby policy through executive action, comparing the president to Obama.

“You cannot end birthright citizenship with an Executive Order,” Ryan said. “We didn’t like it when Obama tried changing immigration laws via executive action, and obviously as conservatives, we believe in the Constitution.”

Meanwhile, Republican voters and conservatives sided with Trump against Ryan’s comment, with more than 7-in-10 Republicans telling pollsters just before the midterms that birthright citizenship should be ended.

At the ballot box, U.S. voters elected Democrats to take back control of the House. In exit polls, voters confirmed what Trump had known all along but what Ryan had refused to deliver on in favor of his conservative beltway platform.

American voters for the ninth consecutive month said health care and immigration were the issues that drove them to the polls. Both remain unresolved.