The wages, productivity, and work satisfaction of blue-collar Americans are rising fast under President Donald Trump’s high pressure, low-immigration economy, says a new report by the blue chip Conference Board.

The report on blue-collar workers says:

We expect labor markets to continue to tighten in the coming years, which will only apply more wage and price pressures across the economy. Industries that employ large shares of blue-collar workers, such as agriculture, mining, utilities, construction, manufacturing, transportation, accommodation and food services, repair, maintenance, and personal care services, are strongly affected. As baby boomers continue to retire, the number of people without a bachelor’s degree in the working-age population is projected to rapidly shrink through 2030.

While hiring undocumented workers has always been illegal, recent changes in enforcement may have reduced the number of available undocumented immigrant workers.

Higher demand [for workers] and lower supply [of workers] are leading to the same outcome: higher wages.

The board’s recognition that supply and demand drive up wages is important, partly because most business-funded groups insist that cheap-labor immigration somehow drives up Americans’ wages:

1) Immigrants and Immigrarion raise supply ANd demand so of course you’re implication is silly but
2) legal status for undocumented would allow more work mobility, ensures all on level playing field & wages to rise…but I guess you’ll have an excuse this isn’t true in this case? https://t.co/156sTASUsY

The Conference Board’s conclusions are a good sign for Trump’s reelection, because he needs strong support from midwest blue-collar voters in 2020. 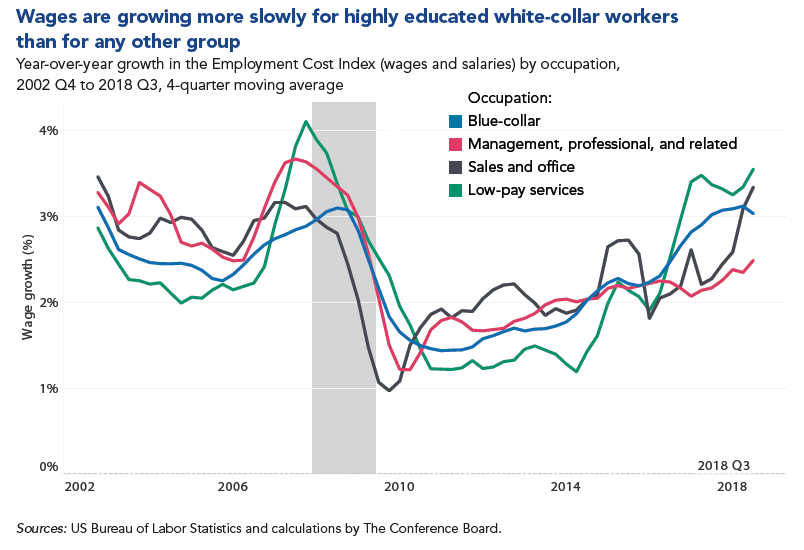 But Trump will also need strong support from suburban white-collar voters — and the report notes that white-collar workers are lagging because there is no shortage of university graduates:

The threat of labor shortages is more acute in blue-collar and low-pay services occupations than in more highly educated white-collar occupations, the exact opposite of the prevailing trends in recent decades.

In contrast to blue-collar workers, labor market tightness for white-collar ones is less visible Wage growth for people in management, professional, and related occupations, who make up 40 percent of the workplace, is slow.

However, Trump has the regulatory authority to change the labor supply for white-collar jobs.

This week, congressional leaders will decide whether to adopt or drop two proposals that would sharply expand the inflow of white-collar visa workers and also import hundreds of thousands of additional H-2A and H-2B manual laborers.

It is not clear if Trump will approve those draft bills once they are placed on his desk in the last-minute budget rush.

While tight labor markets are a problem for employers, they are a boon for workers. For the seventh year in a row, overall job satisfaction has improved for US workers. Job satisfaction is improving faster for workers from lower-income households than for those making $75,000 or above (Chart 16), almost certainly because wages are higher and opportunities more abundant than they once were.

The prolonged tight labor market in blue-collar jobs is having a societal impact as well. Populations that typically have a hard time participating in the labor market are now enjoying improved labor market conditions. One consequence of the tightening labor market for blue-collar occupations is the historically low unemployment rate for racial/ ethnic groups that are statistically less likely to be employed. Chart 17 (page 23) shows that the current unemployment rate for blacks and Hispanics is the lowest since this measure has been recorded.

The gap between rich and poor is narrowing, after expanding amid the mass-immigration policies favored by President George W. Bush said the report:

The recovery in labor market conditions for blue-collar workers is contributing to a potential reversal of the trend of growing wage inequality. Chart 18 shows the ratio of Median Usual Weekly Earnings of the 25th percentile to the 75th percentile and the 10th to 90th percentile. This ratio has been declining for decades, but in the past two years it started moving up. We expect that trend to continue.

U.S. and Irish politicians are quietly cooperating to transfer 5000 white-collar jobs per year from American graduates to Irish grads via the E-3 visa program. A sneak Senate vote is due soon. In 'fair trade,' US retirees could spend their 401Ks in Ireland https://t.co/CKRIerTh4E

Investors and CEOs are buying more labor-saving machinery instead of hiring cheap migrant labor, so raising Americans’ productivity and wealth:

Whereas we have seen a strong acceleration in GDP growth over the past two years, from about 1.5 percent to about 3-3.5 percent, employment growth barely accelerated at all. As such, labor productivity growth must have accelerated … In many industries, recruiting is very difficult, and employers are forced to increase production without rapidly raising headcount.

Sidelined minorities are gaining too:

The prolonged tight labor market in blue-collar jobs is having a societal impact as well. Populations that typically have a hard time participating in the labor market are now enjoying improved labor market conditions. One consequence of the tightening labor market for blue-collar occupations is the historically low unemployment rate for racial/ ethnic groups that are statistically less likely to be employed. Chart 17 (page 23) shows that the current unemployment rate for blacks and Hispanics is the lowest since this measure has been recorded.

Immigration also steers investment and wealth away from towns in heartland states because coastal investors can more easily hire and supervise the large immigrant populations who prefer to live in coastal cities. In turn, that investment flow drives up coastal real-estate prices, pricing poor U.S. Latinos and blacks out of prosperous cities, such as Berkeley and Oakland.