Wealthy cities and elite zip codes thrived under the slow-moving economic recovery of President Obama while rural American communities were left behind, a study reveals.

The Economic Innovation Group research, highlighted by Axios, details the massive economic inequality between the country’s coastal city elites and middle America’s working class between the Great Recession in 2007 and Obama’s economic recovery in 2016.

Between 2007 and 2016, the number of residents living in elite zip codes grew by more than ten million, with an overwhelming faction of that population growth being driven by mass immigration where the U.S. imports more than 1.5 million illegal and legal immigrants annually.

The booming 44.5 million immigrant populations are concentrated mostly in the country’s major cities like Los Angeles, California, Miami Florida, and New York City, New York. The rapidly growing U.S. population — driven by immigration — is set to hit 404 million by 2060, a boon for real estate developers, wealthy investors, and corporations, all of which benefit greatly from dense populations and a flooded labor market.

The economic study found that while the population grew in wealthy cities, America’s rural population fell by nearly 3.5 million residents.

Likewise, by 2016, elite zip codes had a surplus of 3.6 million jobs, which is more than the combined bottom 80 percent of American zip codes. While it only took about five years for wealthy cities to replace the jobs lost by the recession, it took “at risk” regions of the country a decade to recover, and “distressed” U.S. communities are “unlikely ever to recover on current trendlines,” the report predicts.

A map included in the research shows how rich, coastal metropolises have boomed economically while entire portions of middle America have been left behind as job and business gains remain concentrated at the top of the income ladder. 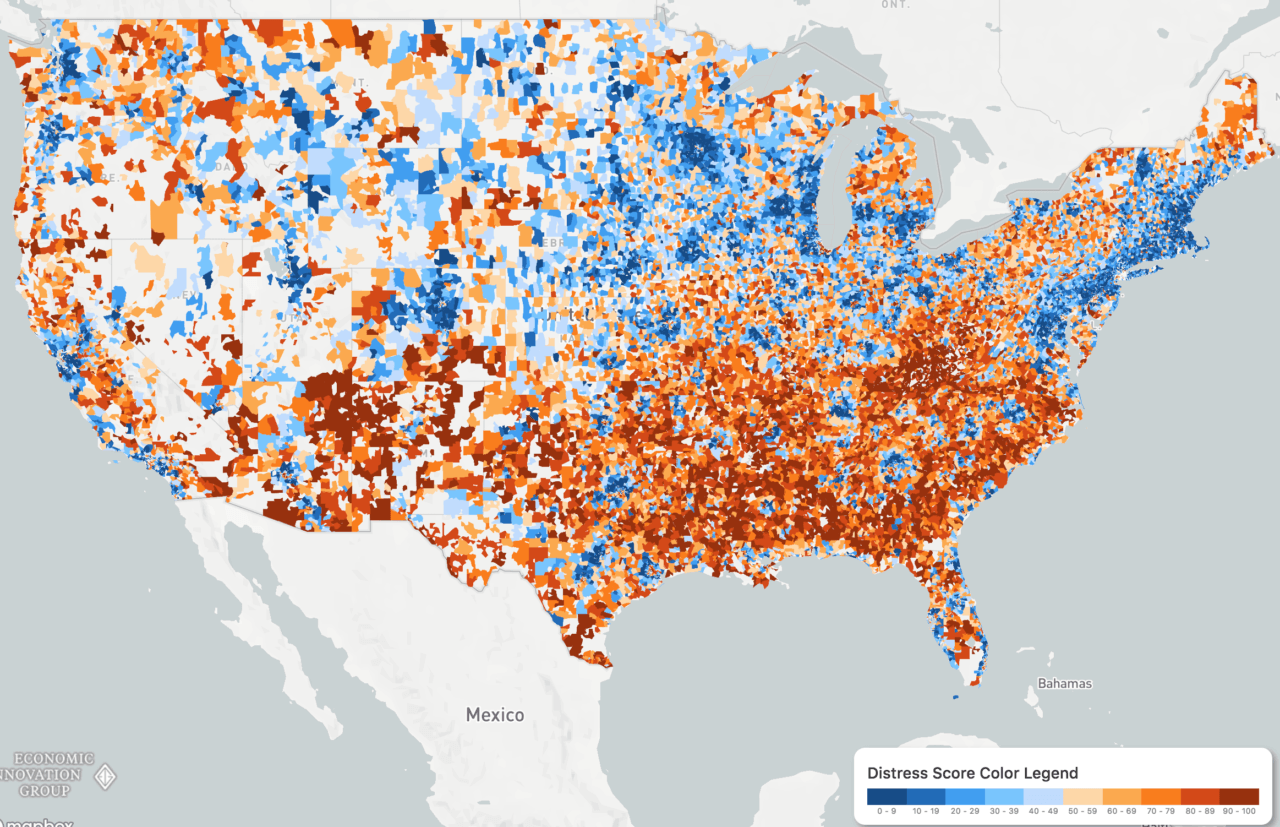 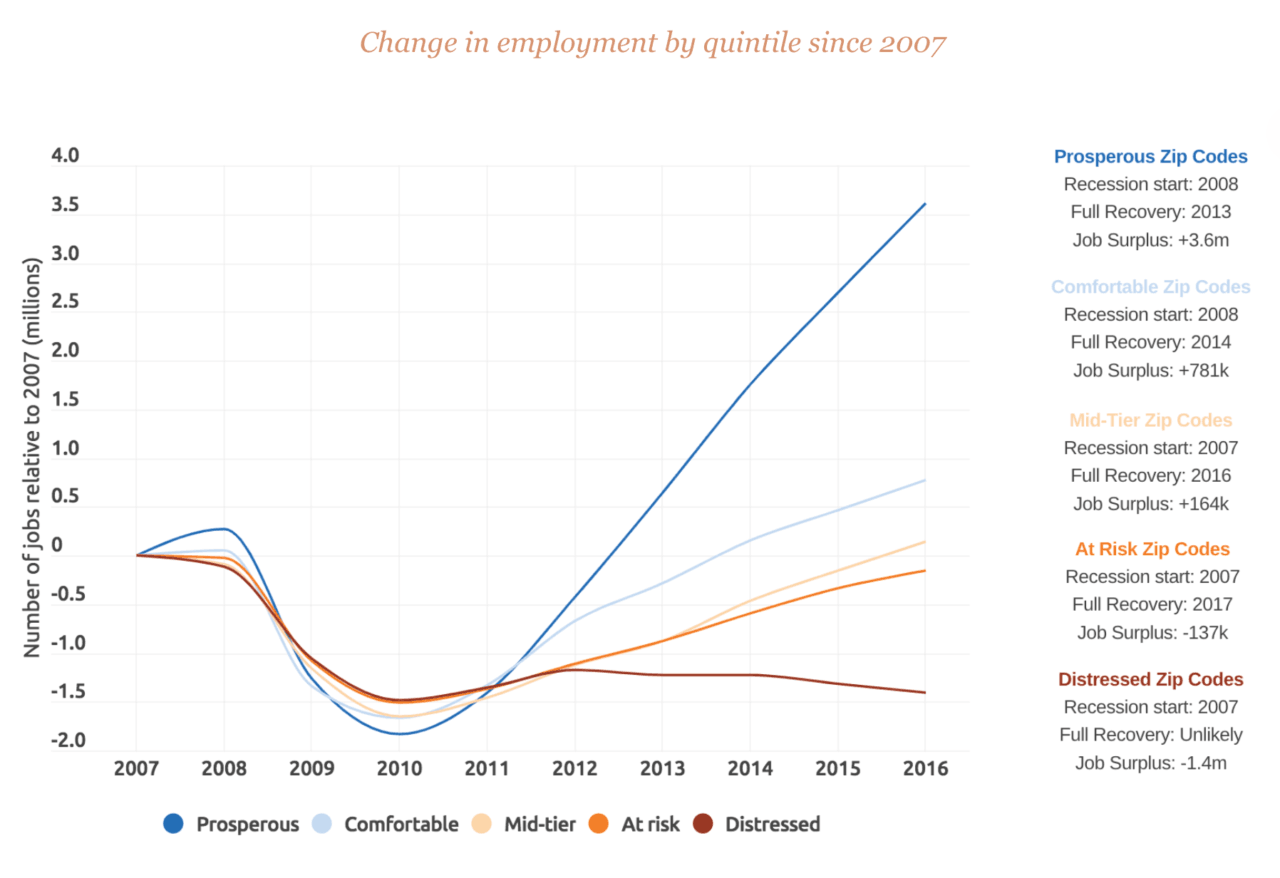 For example, between 2012 and 2016, there were 4.4 percent more business establishments in the country as a whole. That growth was less than two percent in the median zip code and there was close to no growth in the median county.

“Nearly three in every five large counties added businesses on net over the period, compared to only one in every five small one,” the report concluded. 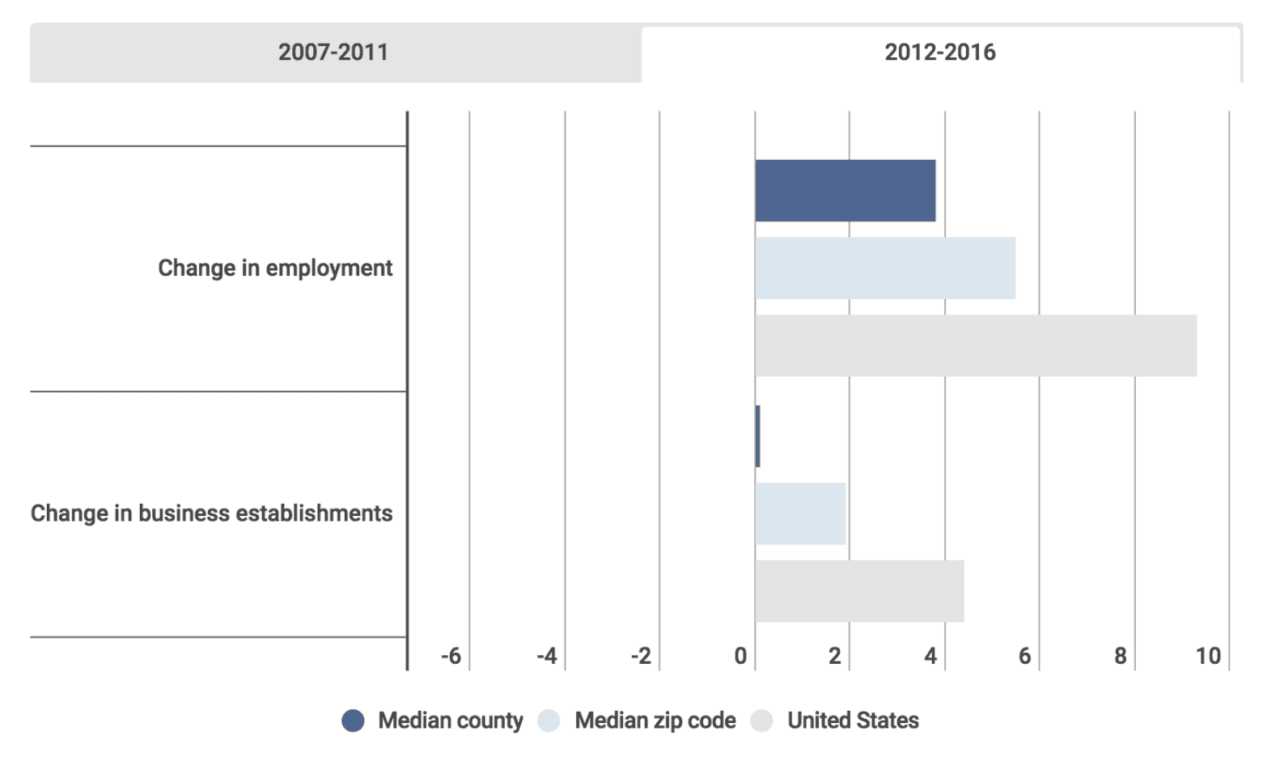 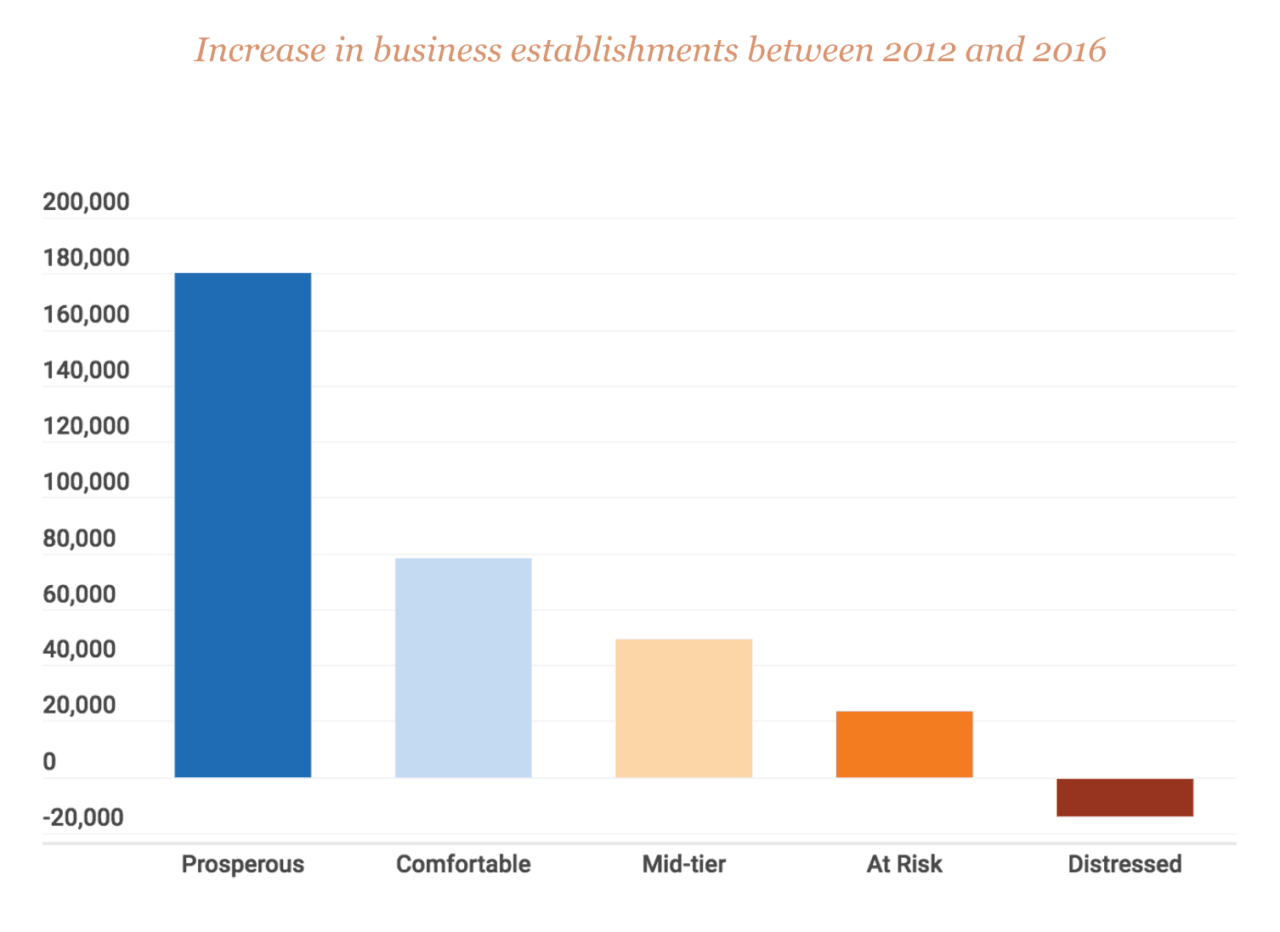 The gutting of the American manufacturing base, through free trade, has been a driving catalyst for the collapse of the white working class and black Americans. Simultaneously, the outsourcing of the economy has brought major wealth to corporations, tech conglomerates, and Wall Street.

The dramatic decline of U.S. manufacturing at the hands of free trade—where more than 3.4 million American jobs have been lost solely due to free trade with China, not including the American jobs lost due to agreements like the North American Free Trade Agreement (NAFTA) and the United States-Korea Free Trade Agreement (KORUS)—has coincided with growing wage inequality for white and black Americans, a growing number of single mother households,  a drop in U.S. marriage rates, a general stagnation of working and middle class wages, and specifically, increased black American unemployment.

“So, the loss of manufacturing work since 1960 represents a steady decline in relatively high-paying jobs for less-educated workers,” recent research from economist Eric D. Gould has noted.

Fast-forward to the modern economy and the wage trend has been the opposite of what it was during the peak of manufacturing in the U.S. An Economic Policy Institute study found this year that been 2009 and 2015, the top one percent of American families earned about 26 times as much income as the bottom 99 percent of Americans.