President Donald Trump’s hot economy is raising wages and bringing more sidelined workers back into the workplace, according to a grudging admission by a “Wonkblog” reporter at the Washington Post.

But the reporter, Andrew van Dam, could not bring himself to mention Trump or admit that Trump’s “Hire American” immigration policy is forcing companies to hire and pay sidelined Americans.

Trump’s policy is very different from the recent Presidents who raised the inflow of foreign workers (legal or illegal) whenever businesses complained about having to hire or reward Americans, such as disabled people, former convicts, and dropouts.

Minorities and women, especially those in their 20s and early 30s, are returning to the workforce. They’ve been drawn back by rising wages and recruited by employers who may have bypassed them when the supply of unemployed Americans seemed inexhaustible.

The rate of labor-force participation for prime-age adults (25-54) rose more in the fourth quarter of 2018 than in any quarter since 1994, part of a turnaround that started about three years ago. The rate climbed 1.1 percentage points from the end of 2015, reaching a 12-month average of 82 percent.

The participation rate among working-age women, described by Labor Secretary Alexander Acosta as “particularly strong,” has climbed 1.6 percentage points since December 2015, based on the 12-month average. The equivalent rate for men rose only 0.7 points. 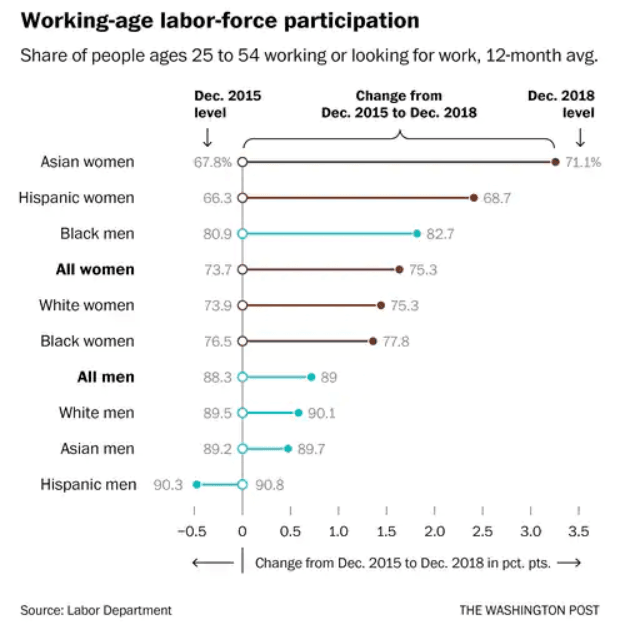 From December 2017 to December 2018, wages rose by 3.2 percent. The best raises were seen among some blue-collar workers and computer specialists, but many groups have not gained much, yet.

But that discrimination problem is also being reduced by Trump’s “Hire American” policy in his go-go economy.

The reporter admitted that “as earnings rise and the pool of unemployed workers dries up, employers are forced to cast a wider net in their search and call back workers whose résumés they initially discarded.”

Nationwide, the U.S. establishment’s economic policy of using legal migration to boost economic growth shifts wealth from young people towards older people by flooding the market with cheap white-collar and blue-collar foreign labor. That flood of outside labor spikes profits and Wall Street values by cutting salaries for manual and skilled labor of blue-collar and white-collar employees.