Breitbart News entertainment editor Jerome Hudson has been named a featured speaker at the latest BLEXIT rally, set to kick off in Richmond, Virginia, on March 3.

Hudson joined Breitbart News in 2015. Called a “rising star” by nationally syndicated talk show host Dennis Prager, Jerome was a senior research analyst at the Government Accountability Institute where he assisted in research for Breitbart News senior contributor-at-large Peter Schweizer’s New York Times Best-selling book Clinton Cash. Jerome is also a member of Project 21, The National Leadership Network of Black Conservatives. His forthcoming book, 50 Things They Don’t Want You to Know, will be available everywhere this fall from Harper Collins.

As entertainment editor of one of the most widely read news outlets in the world, Hudson, who is young and black, is uniquely qualified to take on and expose how Hollywood’s most affluent and influential elites spearhead smear and boycott campaigns against Breitbart News with the express purpose of silencing voices like his.

Blexit co-founder Candace Owen told Breitbart News that she chose to bring Blexit to Virginia because the state has “become our nation’s capital for Democrat hypocrisy.”
“It’s a state which has spent the last two years tearing down statues that were deemed reminiscent of racial unrest is being governed by a man who thinks black face and Ku Klux Klansmen hoods are appropriate Halloween attire,” Owens said, referring to the embattled Virginia governor who has ignored calls to resign from office by major Democrat party leaders after he admitted to wearing blackface.

“It’s a state which senators voted against the confirmation of Justice Brett Kavanaugh — absent any concrete evidence — remains passive on the sexual assault claims facing its Lieutenant Governor,” Owens continued.

“I often state that Democratic Leaders do not care about racism or misogyny, but are rather more concerned with eliciting emotional votes from their constituents. Is there a better time or place to make that case than in the scandal-ridden home of Governor Ralph Northam? Virginia, its time for a #BLEXIT.”

“Minorities do no belong to the left. We belong to no one but ourselves, and God”. This is what #BLEXIT is all about. We have just announced the next rally— in Richmond, VA in March 3rd. Link in bio for tickets. 🇺🇸🇺🇸 @theofficertatum @leodunson @realannapaulina @majorformayor @davidjharrisjr @larryeldershow 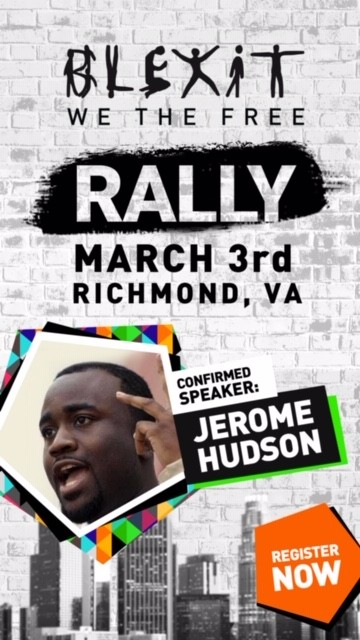 Breitbart News entertainment editor Jerome Hudson is set to speak at the BLEXIT rally in Richmond, Virginian, on March 3.

Last month, hundreds of MAGA-hat wearing Americans traveled from across the country waving “build the wall” signs and converged on the inaugural Blexit rally at the Globe Theatre in downtown Los Angeles, California.

Owens officially launched Blexit — which, as she put it, is a declaration of Independence and black and minority Americans’ exit from the Left — last October. Announced speakers at Blexit Virginia include Owens, Dinesh D’Souza, Brandon Tatum, Will Witt, and more.