Support for charter schools among white Democrats has plummeted, while black and Hispanic members of the party remain steadily favorable toward the schools that are publicly funded but privately managed.

A poll by Education Next conducted in May 2018 showed that, overall, Democrats oppose charter schools, compared to Republicans. The Washington Free Beacon noted, however, that when Chalkbeat requested a breakdown of responses according to race, the results were “startling.” 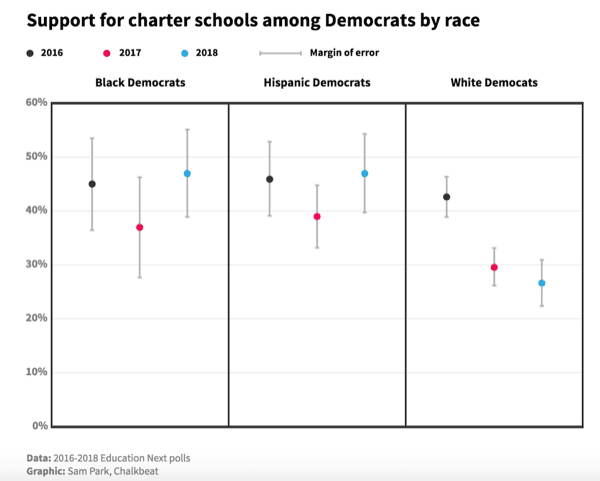 According to the Education Next survey, over the last two years, support for charter schools among white Democrats has crashed, while black and Hispanic Democrats still view them favorably.

A key outcome of another poll, commissioned by Democrats for Education Reform (DFER) — which supports charter schools — found “there is strong public support for public charter schools among key Democratic constituencies, particularly Black and Hispanic voters.”

The surveys are published as both Democrat 2020 hopefuls, Sens. Bernie Sanders (VT) and Elizabeth Warren (MA), have called for an end to federal funding of for-profit charter schools.

Sen. Cory Booker (NJ) — their Democrat colleague and also a 2020 contender — has been a vocal supporter of school choice in the past, even to the extent of having worked in the recent past with current Secretary of Education Betsy DeVos and her family to promote the concept.

In a February column at Mother Jones titled “Cory Booker Has a Betsy DeVos Problem,” Kara Voght wrote about Booker’s keynote address in 2012 at a school choice policy summit in New Jersey.

Booker, who was the mayor of Newark at the time, was one of only a few Democrats to speak at the event run by the American Federation for Children, an organization chaired at the time by Betsy DeVos.

The current U.S. senator told hundreds of attendees the public school system “still chokes out the potential of millions of children” and urged others to follow his lead by replacing failing public schools with publicly-funded charter schools that are managed by private companies.

As New York Magazine noted, Booker ultimately voted against DeVos’ confirmation as Secretary of Education, though he has defended his school choice reforms made when he was mayor of Newark.

The black/Hispanic-white Democrat divide over school choice could create an interesting issue for the party as it attempts to increase its power in Washington, DC.

“It creates a bit of a challenge for Democratic candidates in the presidential primaries,” Marty West, a Harvard professor and editor-in-chief of Education Next, told Chalkbeat. “It’s not clear to me that many people will be basing their decisions on education, but voters of color are a substantial segment of the Democratic primary electorate.”

Results of the larger Education Next poll were based upon a nationwide sample of 4,601 adults and representative oversamples of parents with school-age children living in their home (2,129), teachers (641), blacks (624), and Hispanics (799). Education Next states, “The margin of error for binary responses given by the full sample in the EdNext survey is roughly 1.4 percentage points for questions on which opinion is evenly split.”

The DFER nationwide phone poll used the responses of 1,004 presidential voters, including 415 Democrat primary voters, who were interviewed between May 31–June 7, 2018. The margin of error for the entire sample is ±3.8 percent at a 95 percent level of confidence.