President Donald Trump will appear at a political rally for India’s Prime Minister Narendra Modi in Houston, Texas, amid the growing push by business lobbies to raise the inflow of H-1B visa workers from India.

In Houston, President Trump will participate in an event with Prime Minister Narendra Modi of India. The event, “Howdy, Modi! Shared Dreams, Bright Futures,” is expected to draw tens of thousands of people. It will be a great opportunity to emphasize the strong ties between the people of the United States and India, to reaffirm the strategic partnership between the world’s oldest and largest democracies, and to discuss ways to deepen their energy and trade relationship.

The Houston gathering is a political display for Indian immigrants in the United States. It is supported by hundreds of Indian community organizations, including some which are backed by Indian’s central and state governments.

The event is billed as, “a community summit in honor of the Prime Minister of India.” The event is dominated by Hindu organizers and leaders, partly because Modi leads a Hindu political party.

India has a population of at least 1.4 billion — four times the size of the U.S population. The country is diverse and often wracked by conflict between ethnic, religious, and caste groups. The population is 80 percent Hindu, 14 percent Muslim, 2.3 percent Christian, and 1.7 percent Sikh.

The Houston event is also serving as a business opportunity because Indian leaders are offering to open up their partially developed economy to U.S companies, such as Walmart and Amazon. Indian officials promise to buy U.S. energy and technology, but they want the U.S. government to let U.S. companies lease more Indian college graduates for U.S. jobs via the H-1B and OPT visa-worker programs.

Many U.S. investors and business leaders want to embrace the promised U.S.-India Outsourcing Economy to offset the economic impact of the expanding trade conflict with China.

U.S.-China free trade allowed many U.S. investors to transfer millions of U.S. factory workers’ jobs to low-wage Chinese workers. But the proposed U.S.-India alliance would transfer a flood of Indian college graduates into the U.S. jobs now held by American professionals and college-graduates, including doctors and engineers, software writers and designers. For example, Walmart is outsourcing 569 finance and accounting jobs in North Carolina to Indian contract-workers who will be imported by a U.S. outsourcing firm, Genpact. The Genpact firm is a spin-off of General Electric, is a part-owned by Bain Capital, and is a member of NASSCOM.

But Trump campaigned against the H-1B visa in 2016, earning him some votes from usually pro-Democrat suburban professionals. In March 2016, for example, his campaign posted a statement saying:

The H-1B program is neither high-skilled nor immigration: these are temporary foreign workers, imported from abroad, for the explicit purpose of substituting for American workers at lower pay. I remain totally committed to eliminating rampant, widespread H-1B abuse and ending outrageous practices such as those that occurred at Disney in Florida when Americans were forced to train their foreign replacements. I will end forever the use of the H-1B as a cheap labor program, and institute an absolute requirement to hire American workers first for every visa and immigration program. No exceptions.

Trump has also said repeatedly in 2019 companies should be allowed to import workers because of the expanding economy. In August, the White House sent out a tweet of Trump calling for more foreign workers:

Since the inauguration, the Department of Homeland Security has adopted some reforms which have slightly reduced the number of resident H-1B workers to perhaps 800,000. The agency dropped one plan which would have blocked more than half of the H-1B workers by requiring the incoming workers to greater skills that ordinary American graduates.

The agency has drafted a much-delayed regulation to end President Barack Obama’s H4EAD program, which offers work permits to the spouses of H-1B visa workers. The regulation, however, has been frozen by the Office of Management and Budget. Business groups strongly support the H-4EAD program because it helps many Indian H-1B workers persuade their spouses to stay in the United States for the many years it takes them to get a green card.

The administration is also fighting a lawsuit that would kill the OPT outsourcing program, which keeps at least 20,000 Indian workers in the United States.

Overall, Trump’s “Hire American” policy has suppressed extra immigration while his economic policies have created millions of new jobs. The result is that U.S. companies and investors are scrambling to hire millions of sidelined Americans and are reluctantly beginning to offer higher wages. On September 10, the Census Bureau said men who work full time and year-round got an average earnings boost of 3.4 percent in 2018, pushing their median salaries up to $55,291, a 3.4 percent gain after adjusting for inflation. Women gained 3.3 percent in wages, to bring their median salaries to $45,097 for full time, year-round work. The rising wages also pushed poverty among blacks to a record low — and are giving the GOP a chance to win non-white voters in a high-immigration, diverse nation.

But many U.S. business groups are lobbying the U.S. government to expand the U.S.-India Outsourcing Economy.

The whole idea of these [executive] fly-ins, and NASSCOM coming in, and interacting with people on this side of the pond, is to make sure that we are continuously enabling the availability of skilled talent, and also working with the powers that be, and the government, to ensure that bad policy does not impact the great progress that we have made.

The event was timed to promote passage of the S.386 “country caps” bill, which would dramatically increase the incentives for more lower-wage Indian graduates to take U.S. middle-class jobs sought by U.S. college graduates.

India already keeps at least 700,000 Indian graduates in U.S. jobs, mostly at salaries below what is needed by American graduates. Roughly 4 million Indians live in the United States, including at least 1 million visa-workers and family members, plus approximately 630,000 illegals. Many of the illegals have been sneaked in with the help of Indian businesses in the United States.

India seeks to grow its economy by exporting many workers. In February 2019, the Forsyth County News reported:

Ani Agnihotri, program chair of the USA-India Business Summit … said India has a massive and young population that could provide skilled, English-speaking workers ready to relocate “even at a seven-day notice” and said the majority of doctors in the United Kingdom and about 15 percent in America are of Indian descent.

“India has the youngest population in the world. About 25 percent of the population of India, which is 1.25 billion, is below the age of 25,” he said. “We will be the provider of the workforce of the world in about 15 years, after 2035.”

About 50,000 Indians become citizens each year via company-sponsored green cards, so allowing them to start the chain migration of their relatives. At least 600,000 Indian visa-workers and family members are being allowed to stay in the United States long past their visa expirations because they have been nominated for green cards by their employers.

Nearly all of the relatively few Indian immigrants who have become citizens voted for Democratic candidates in 2016, according to a survey of the 2016 voters. 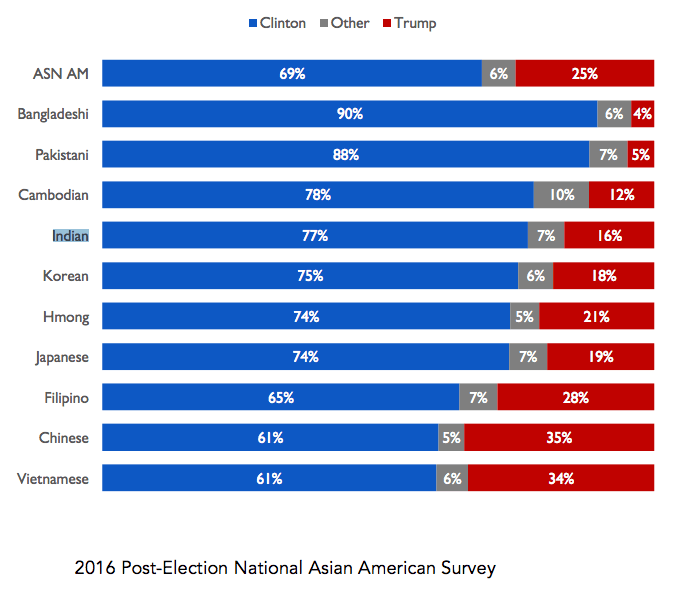 According to a statement from the 612 Indian groups which organized the Texas event for Modi:

The Texas India Forum is excited to welcome President Donald J. Trump to address over 50,000 Americans as we host Prime Minister Narendra Modi of India in Houston on September 22 at NRG Stadium. The “Howdy, Modi! Shared Dreams, Bright Futures” Community Summit attendees represent 48 states, coming together to emphasize the shared values and aspirations of two great nations whose partnership is important to global peace, prosperity, and human progress. This unique event brings together the President of the world’s most influential democracy, the Prime Minister of the world’s largest democracy, and a bipartisan delegation of Governors, Members of Congress, Mayors, and other public officials.

After his stop-off in Texas, Trump’s will fly to Ohio where he will tour an Australian-funded factory, according to the White House:

President Trump will then travel to Wapakoneta, Ohio, where he will be joined by Prime Minister Scott Morrison of Australia for a tour of a new, Australian-owned manufacturing facility. This visit will demonstrate the strong trade and investment relationship between the United States and Australia and President Trump’s successful efforts to restore the United States as the world’s leading destination for foreign direct investment.

Immigration has frozen middle-class wages in California for 40 years. That's part of why any debate over immigration economics is taboo among journalists in the establishment media. https://t.co/LJ7xMtV9Pb