Several hundred Tea Party activists gathered Thursday morning on the steps of the Capitol for a “Stop Socialism, Chose Freedom” rally hosted by the Tea Party Patriots and featuring members of the House and Senate and conservative activists, who called on fellow Americans to reject the resurgent socialism among the left.

Speakers pointed to positions of the 2020 Democrat presidential candidates, arguing that they have been skewing further left to meet the demands of progressives on everything from wealth distribution, gun control, health care, and abortion. 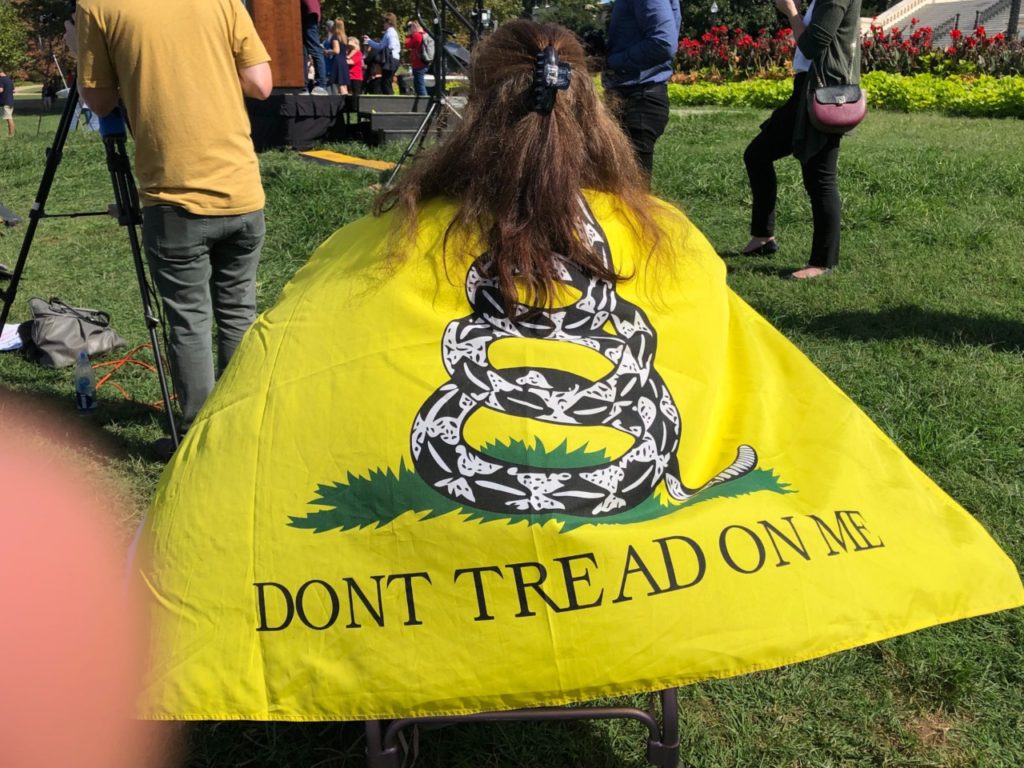 Alek Skarlatos, who was one of three Americans who stopped an attempted terrorist attack while in France, implored attendees to stand up for liberty.

“I think that socialism is leading us in the absolutely wrong direction for this country. I think that everyone in this country has a right to defend themselves. And I mean, I carry a gun on me everyday,” said Skarlatos, who served in the Army National Guard and is now running for Congress in Oregon’s 4th Congressional District.

“This next election is going to be incredibly important, to take a stand against socialism simply because the Democrats have gotten increasingly more socialist. Even if you just look at the presidential candidates, you have Beto O’Rourke saying, ‘We’re going to come take your AR-15s, your AK-47s.’ That’s something that not even Democrats — just going back to last cycle — would never admit publicly. Now we know what their true agenda is,” he said.

“It’s all about personal liberty, and not using our taxpayer dollars to pay for other people’s lives,” he argued. 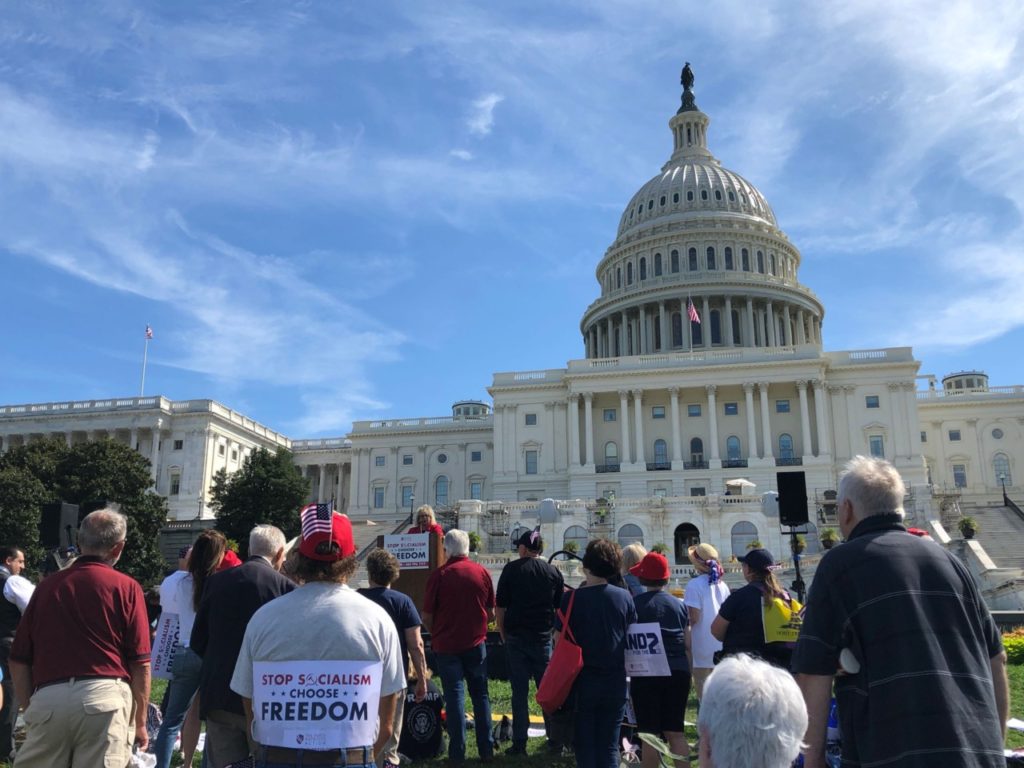 Rally-goers gathered on the steps of the Capitol in Washington, D.C. (Credit: Matt Perdie / Breitbart News)

Oskar Arreaza Hernandez, who fled socialist Venezuela and has been in the United States for five years, urged everyone to look at Venezuela for an example of how socialism can ruin a country.

Morgan Zegars, founder of Young Americans Against Socialism, spoke about the spread of socialism among young Americans.

“My generation was raised on participation trophies. So we lack those values of hard work. We went through the education system where we weren’t really taught about the dangers of socialism and communism,” she said.

“It’s official. There are polls that will say that a majority of young Americans, my generation, would choose socialism over capitalism. It’s official. So we’ve got to do something about it,” she said.

“Politicians are training my generation to accept the idea of wealth distribution by saying, ‘You have a lot of debt, these evil rich people, the one percent, the millionaires and billionaires,’ as Bernie likes to say, they have all the money and we’re going to give it to you because you deserve it, you just have to give us power,” she added. 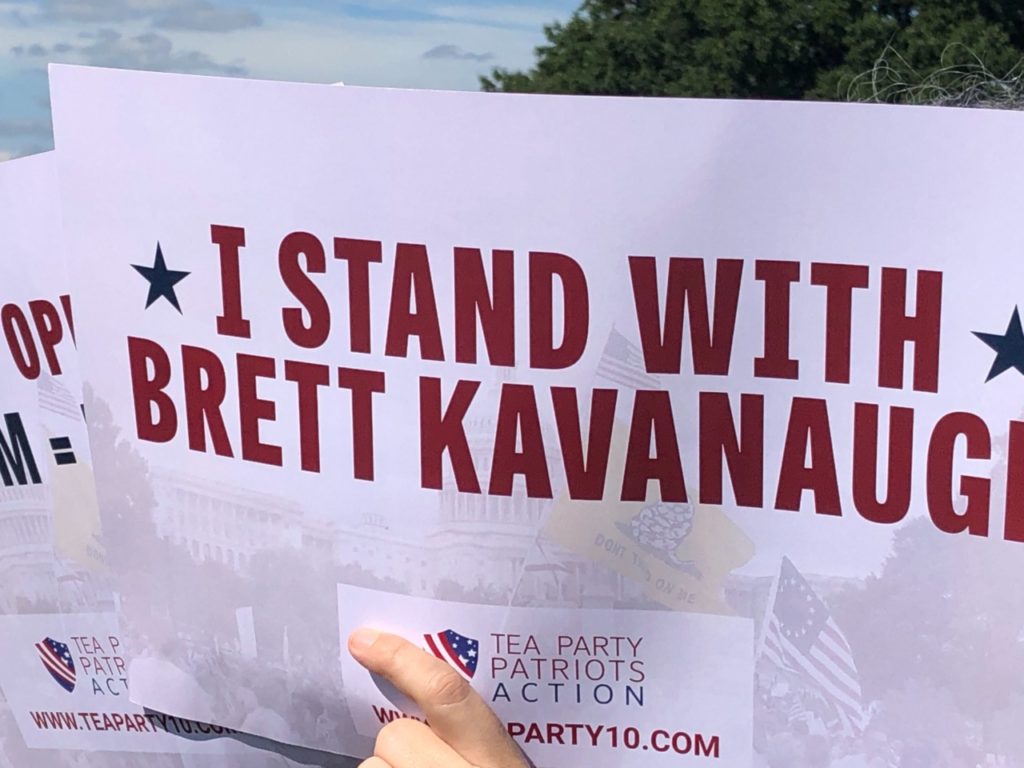 Rep. Mo Brooks (R-AL) was among members of the House Freedom Caucus to address the crowd.

He warned that socialists were trying to take away Americans’ power by allowing non-citizens voting rights.

Rep. Paul Gosar (R-AZ), another member of the House Freedom Caucus, spoke at the rally. “You see all the Democratic nominees for president running right now. They want to take from you, to redistribute wealth, we should never stand for that.” 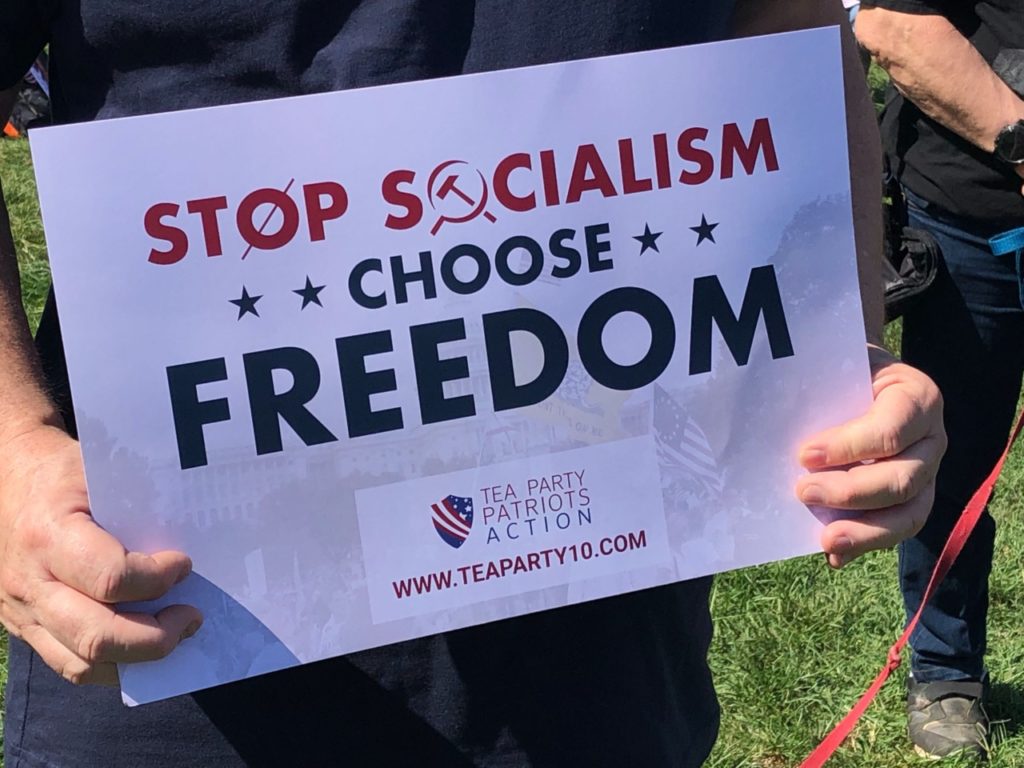 Sen. Mike Lee (R-UT), noted that although the Tea Party movement does not get as much attention as it once did, it “remains strong.”

“The spirit of the Constitution lives on in our hearts. It’s made a difference in who we elect. And for many of us it makes a big difference — all the difference — in how we vote,” he said.

“Socialism, my friends, is not compatible with the U.S. Constitution. It doesn’t belong on U.S. soil, let’s keep it out,” he added.

“Every one of them is supporting open borders. And not only that, they’re saying we got to provide free taxpayer health care for every illegal alien in America,” he said. “You want to know what those Democrats are all about, they’re all about socialism.”

Cruz, whose father was born in Cuba, urged Americans to look at how socialism worked in other countries:

Look at Venezuela. Look at Cuba. Look at Nicaragua. Did you know that in 1950 Venezuela was the fourth wealthiest country on the face of the earth? … Today people are literally starving in the streets, they’re eating from trashcans. And what are the people’s nationalist Democrats who are running now say, ‘Let’s bring more of that here.’ 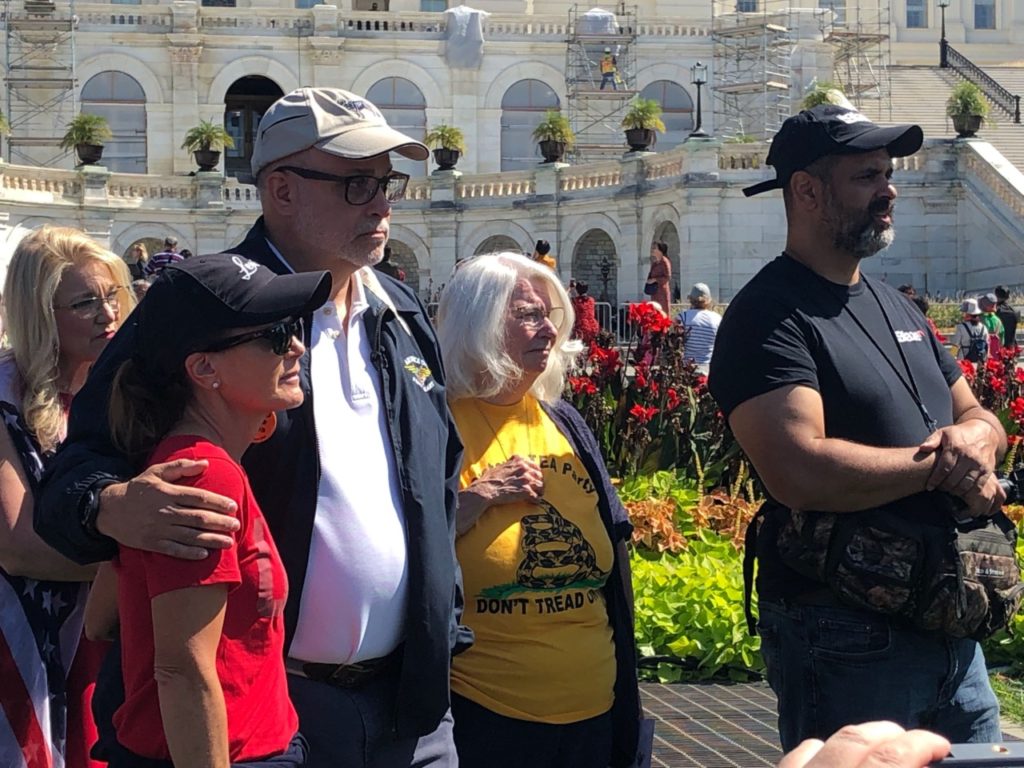 “The greatest enemy poverty has ever seen in the history of humanity is the American free enterprise system,” he added.

Jennifer Zeng, who escaped socialist China and is a member of the Falun Gong, a group persecuted in China, shared a gripping story of being arrested four times in China, imprisoned in a labor camp, and tortured.

She said labor camp prisoners were forced to squat outside in the hot sun with their hands behind their head. If any fainted, they would be prodded with an electric rod so they would regain consciousness and continue squatting, she said. She said they were also forced into slave labor for products that would be exported, including to the U.S.

“I never wanted to live in any sort of socialism again. But here in the U.S. I’m starting to feel that it has followed me…the majority of young Americans are attracted by it,” she said, adding:

The [Chinese Communist Party] controls everything…it can make all the rules, it can take away people’s liberty, property, and dignity, and persecute them at will,” she said. “Socialists promise heaven on earth but always end up giving you a one-way ticket to hell.”

Mark Levin, a popular conservative personality and author, fired up the crowd towards the end of the rally.

“We are here today because we believe in one word. Liberty. Socialism is the opposite of liberty. Under socialism you surrender your heart, your soul, and your mind to Elizabeth Warren, to Bernie Sanders, and Corey Booker, and the rest of them,” he said. He continued:

Levin also blasted the mainstream media, arguing that they are doing more harm to a free press than the government could ever do.

“We don’t have a free press. We have a modern mass media filled with progressives and ideologues and Democrats and social activists who have done more to destroy freedom of the press more than any government to do,” he said.

“This can be lost. And in most societies it is lost. … that is left to us,” he warned. “We are here to tell the press and the Congress that we are not going anywhere.”

He finished with a message to President Trump: “Stand strong, keep in the fight, we back you. Because you stand between us and them.” 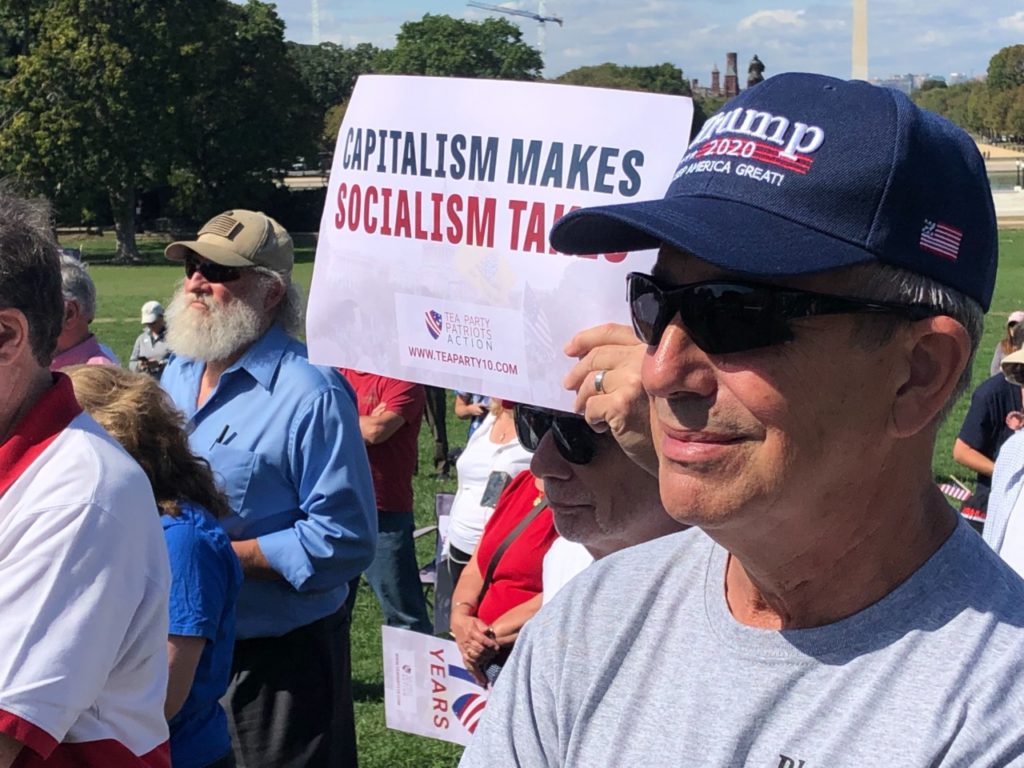