A parent in Austin, Texas, said she is “offended” by the proposed sex ed curriculum in her school district that normalizes LGBT sexual relations and invites greater risks to children.

“I oppose the approval of the sex ed program because in that curriculum, sixth-graders will be engaging in written scenarios to propose solutions to homophobia,” Caryl Ayala, co-founder of the local group Concerned Parents of Texas, said at a school board meeting Monday night.

Texas Scorecard, a publication of Empower Texans, reported Ayala and other parents rallied against the curriculum, developed in part by abortion business Planned Parenthood, and testified before the trustees of the Austin Independent School District (AISD).

“This will create a climate that pits students against one another and violates students’ rights to hold a different opinion regarding boundaries of sexual behavior according to their family’s values,” she said, adding the curriculum would violate the cultural values of many Hispanic families such as her own.

“I am offended that this school district is grooming 46,000 Hispanic children to accept these behaviors,” Ayala continued. “I consider this a direct assault on Hispanic family culture.”

You can't make this up folks, AISD swapped out Planned Parenthood's sex ed for radical LGBT pro abortion Canadian sex ed. It's so crazy not even we could believe it at first, but check the link for screenshots!https://t.co/IHYgSpUJ85 #TXlege

The family values organization continued the “revised” curriculum “is just as radical and inappropriate as Planned Parenthood’s”:

In fact, despite AISD’s claim to have developed this curriculum “internally,” most of the curriculum seems to come from Canadian pro-LGBT abortion providers. Make no mistake, AISD’s revised curriculum shares the same legal (and moral) concerns as Planned Parenthood’s Get Real.

In the Grade 6 draft curriculum, students will be taught to “differentiate between gender identity, gender expression, and sexual orientation.” 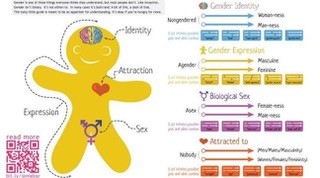 In the section on “homophobia,” teachers are instructed to ask students “how gender can be thought of as a spectrum.”

“Explain that sexuality … is neither predictable nor linked to gender identity,” the program teaches. “While it is often assumed that boys like girls and girls like boys, these assumptions are harmful and exclude individuals who identify as lesbian, gay, bisexual, etc.”

In the proposed curriculum, sixth graders will also learn to “recognize injustices and plan ways to denounce inequality.”

Students will be taught they should not make “assumptions” such as “boys cannot wear dresses.”

More examples of the proposed curriculum can be found at Texas Values.

AISD has embraced gender ideology, evident by its annual “pride week” in schools and encouragement of students to march in the Austin Pride Parade.

Austin ISD participates in many parades and celebrations throughout the year, and this school year, we begin with the…

We invite you to join district leadership, staff, families and All-Star High School Band students in our parade contingent … All are welcome, and we hope to see you on Saturday, Aug. 10! … However, if you decide to refrain from marching, we invite you to join a Pride Parade Watch Party from 8-10 p.m. on Saturday night.

Yet despite the district’s slogan of “All Are Welcome,” the school board has discriminated against those who don’t join them in promoting high-risk sexual behavior. Last September, the board tried to ban local Celebration Church from renting a district public facility for one reason—the church holds the foundational Christian belief that marriage is between a man and a woman. The school board was unsuccessful in their discrimination attempt after Texas Attorney General Ken Paxton got involved and warned the district that doing so would violate state law and the First Amendment.

Other parents and citizens testified before the AISD board regarding the proposed sex ed curriculum.

“These types of lessons are sexualizing our children,” said citizen Lorie Meynig. “Please focus on reading, writing, and arithmetic.”

“Many of us are concerned that the national sexuality education standards that have been adopted by the AISD board are not in compliance with the laws of the state of Texas,” said grandparent Don Dores, who spoke of the age of consent laws in the Texas Education Code.

The report mentions that, in 2017, AISD Covington Middle School distributed a Planned Parenthood information sheet to students, one that featured links to the organization’s consent video series, some of which have scenes of gay and lesbian couples undressing each other as a prelude to sex.

“It’s time for us to stand up to the board, tell them to go back to the drawing board, and give parents another opportunity to give their input in what their children should be taught,” said Mary Elizabeth Castle of Texas Values, who spoke at the rally.

The board is expected to decide on the sex ed curriculum in November.