The wealthiest Americans are paying a lower tax rate than all other Americans, groundbreaking analysis from a pair of economists reveals.

For the first time on record, the wealthiest 400 Americans in 2018 paid a lower tax rate than all of the income groups in the United States, research highlighted by the New York Times from University of California, Berkeley, economists Emmanuel Saez and Gabriel Zucman finds.

The analysis concludes that the country’s top economic elite are paying lower federal, state, and local tax rates than the nation’s working and middle class. Overall, these top 400 wealthy Americans paid just a 23 percent tax rate, which the Times‘ op-ed columnist David Leonhardt notes is a combined tax payment of “less than one-quarter of their total income.”

This 23 percent tax rate for the rich means their rate has been slashed by 47 percentage points since 1950 when their tax rate was 70 percent. 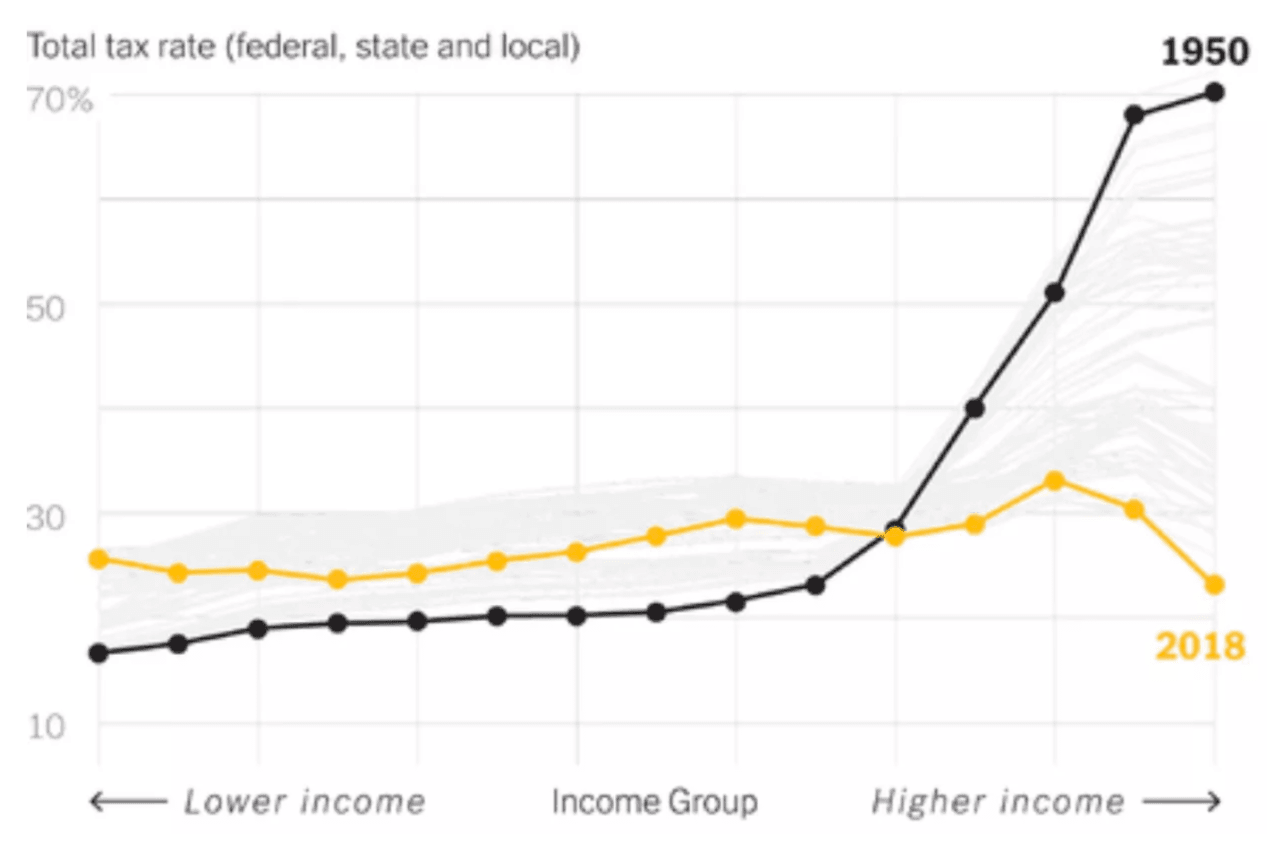 The analysis finds that the 23 percent tax rate for the wealthiest Americans is less than every other income group in the U.S. — including those earning working and middle-class incomes, as a Times graphic shows.

For middle-class and poor families, the picture is different. Federal income taxes have also declined modestly for these families, but they haven’t benefited much if at all from the decline in the corporate tax or estate tax. And they now pay more in payroll taxes (which finance Medicare and Social Security) than in the past. Over all, their taxes have remained fairly flat. [Emphasis added]

The report comes as Americans increasingly see a growing divide between the rich and working class, as the Pew Research Center has found.

Sen. Josh Hawley (R-MO), the leading economic nationalist in the Senate, has warned against the Left-Right coalition’s consensus on open trade, open markets, and open borders, a plan that he has called an economy that works solely for the elite.

“The same consensus says that we need to pursue and embrace economic globalization and economic integration at all costs — open markets, open borders, open trade, open everything no matter whether it’s actually good for American national security or for American workers or for American families or for American principles … this is the elite consensus that has governed our politics for too long and what it has produced is a politics of elite ambition,” Hawley said in an August speech in the Senate.

That increasing worry of rapid income inequality is only further justified by economic research showing a rise in servant-class jobs, strong economic recovery for elite zip codes but not for working-class regions, and skyrocketing wage growth for the billionaire class at 15 times the rate of other Americans.