A “servant class” that serves the needs of the country’s top one percent is among one of the fastest-growing job markets in the United States, economic analysis finds.

As about 1.2 million mostly low-skilled legal immigrants are admitted to the U.S. every year to take primarily low-wage jobs, an underclass of servants for the wealthy has boomed over the last decade compared with overall job growth.

Research by MIT’s David Autor reveals that servant class jobs like manicurists and pedicurists have grown 114 percent between 2008 and 2018. Meanwhile, all U.S. jobs have grown just seven percent in that same time period. 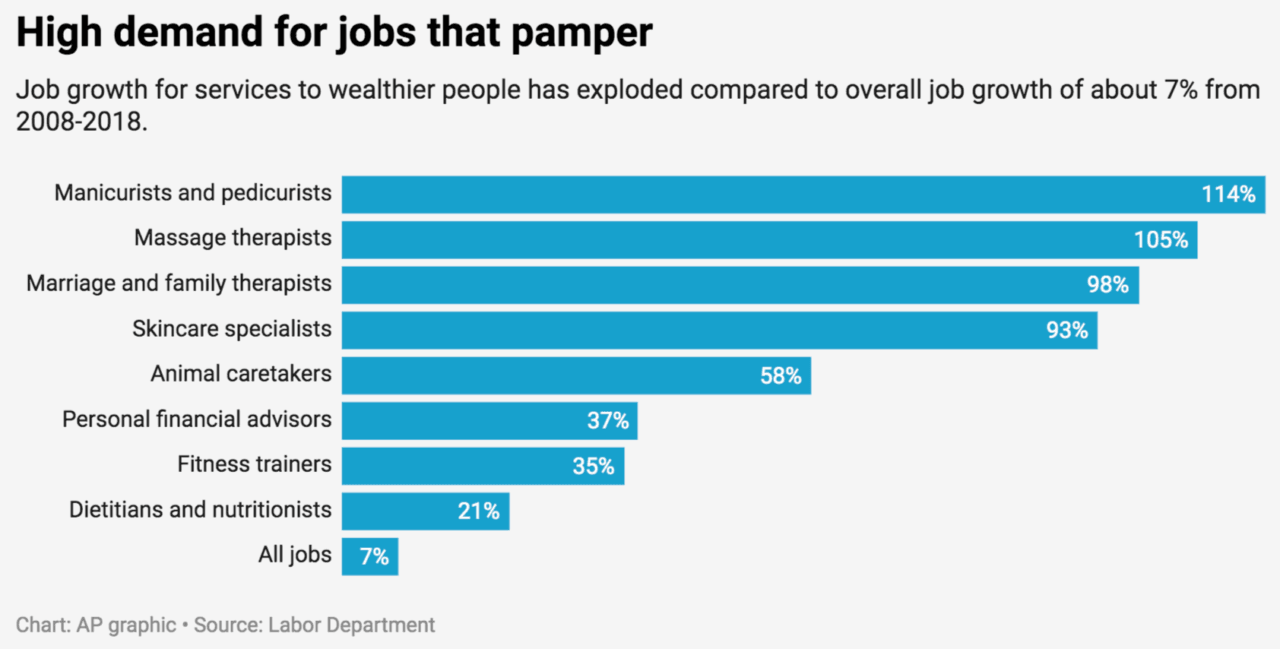 (Screenshot via the Associated Press)

Economists admit that these servant class jobs are oftentimes self-employed and therefore leave workers without benefits like health insurance and offer low wages.

Data published exclusively by the Associated Press shows that in 2017, there were about 3.2 million servant class workers in the U.S. – an increase of 2.8 million since 2010.

Author of End of Equality Mickey Kaus highlighted the data in his weekly newsletter, writing that the growing market of a servant class “seems inherently inegalitarian” and is likely directly tied to the national importation of more than a million legal immigrants, in addition to the hundreds of thousands of illegal aliens who enter every year, by the federal government.

When I was researching End of Equality in the early 1990s, the long decline of servant employment, noted by [Samuel Eliot] Morison, was still one of the glories of America’s middle class culture. We didn’t have maids, we had fancier and fancier vacuum cleaners. But it was obvious the mid-century decline was by then already beginning to turn around, coinciding, perhaps not coincidentally, with a surge in immigration.

Now, with the rich still getting richer, the ‘Servant Economy’ is on the verge of exploding. If cutting the number of less skilled immigrants makes that explosion smaller, or less likely, that’s a good thing in itself, even if it has no effect on overall wages.

Since the Great Recession and President Obama’s economic recovery, the U.S. has seen an expansion of income inequality where elite zip codes added more business establishments between 2012 and 2016 than the entire bottom 80 percent of zip codes, as Breitbart News reported. For instance, while more than 180,000 businesses have been added to rich zip codes, the country’s bottom tier has lost more than 13,000 businesses, even after the economic recovery.

Similarly, the country’s top 0.01 percent — the millionaire and billionaire class — has enjoyed more than 15 times the wage growth since 1979, more than 343 percent, compared to the bottom 90 percent of Americans who have seen a growth of 22.2 percent in wages.