Two transgender men shouldered numerous elite women aside to win slots in a status ranking of  “150 Most Powerful” women in Washington, DC.

The Washingtonian magazine’s cover photo of elite women in D.C. included 13 women — and one man who took a competitive space.

The visible space would otherwise have gone to a fourteenth woman, such as Stacey Khoury-Diaz, who earned her inside page place by “open[ing] a business and hav[ing] a baby in the same year.” 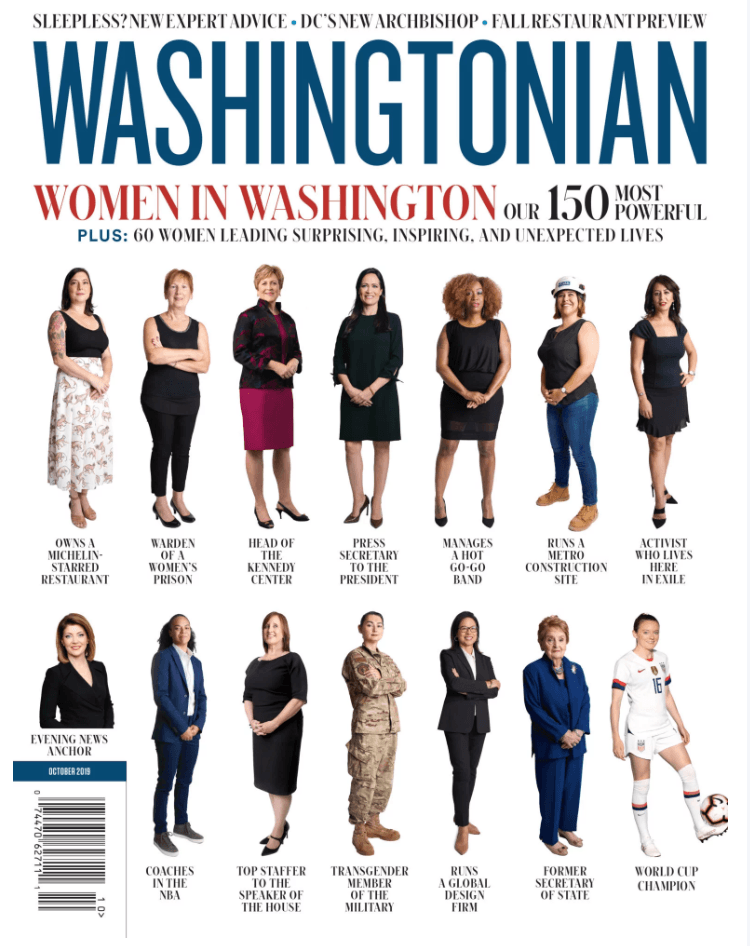 The full list of 150 women and men also included another man, who grabbed a ranking that could have been won by a woman who remains invisible because she did not make the 150-person list, which is published annually by the glossy Washingtonian magazine.

The two men included in the women’s list have their own accomplishments. One is Martine Rothblatt, who created the Sirius XM satellite-radio business and launched a pharmaceutical company, United Therapeutics. The other is Alexandria Holder, a U.S. Air Force sergeant and linguist.

But the two men’s inclusion automatically means that two women get excluded — and it boosts the transgender ideology’s claim that the two men become women merely because they say they are women, regardless of biology, physiology, and political preferences.

The biological differences — and the matching political and cultural preferences — are denied by the transgender ideology.

The ideology argues that the government should suppress any legal or civic recognition of the complementary differences between the two distinct sexes.

Conservatives & (some) feminists agree biology shapes our personalities & politics. They're uniting to stop the progressives' ruthless "transgender" demand that we deny biology's impact on people & politics despite the known hazards to adults, teens & kids https://t.co/gND8VfyMOl

The transgender movement “has only one [political] purpose — to erase women” from recognition in society, said Anne Schlafly Cori, who heads the Eagle Forum.

Transgender activists want to erase the recognition of women and their distinct views and needs by “promot[ing] the idea that men and women are interchangeable in every situation,” she said.

The displacement of women is easily seen in sports, she said. “Men who could not win and have restyled themselves as women to get first place in athletic competitions …  [and] the women who have worked hard in their athletic endeavors are no longer placed first, second, or third,” she said.

In politics, men declare themselves as women and “pretend to speak for women on women’s issues,” she said. “For those of us who are women, we’re happy to speak out on issues. … We don’t need a man to speak on our issues.”

Men are also trying to change how women present themselves in society, she said, adding:

Men who are transgender [often present] an idealized look of women as a beauty queen or a Barbie Doll. This faked womanness I find bizarre because I don’t know any woman who looks or wants to dress in a corset the way transgender [men] want to present themselves. They are subverting what it is to be a woman by saying you can only be a woman by wearing a corset, lots of makeup, and fishnet stockings.

The inclusion of men in the “150 Most Powerful Women” list is a loss for women, Schlafly Corsi added. “Women have spent decades trying to break the glass ceiling and now there is a new ceiling [of] men masquerading as women,” she said.