The Democrat presidential hopefuls want you to believe that they have a plan for raising taxes on the rich. And maybe, if one of them wins next year, they will, in fact, nick the rich a little—but don’t count on it.

After all, the last two Democrat presidents, Bill Clinton and Barack Obama, also campaigned on raising taxes on the wealthy, and yet during their time in office, the effective tax rate on top earners actually fell.

How so? Well, one way of making the comfortable even more comfortable is by legalizing prostitution. That way, for those so inclined, the man—or woman—who has everything can have even more of everything, with no fear of the prudish police.

A case in point is Elizabeth Warren, whom the betting markets consider to be the Democrat most likely to win the 2020 nomination. On October 10, Warren tweeted some news sure to cheer rich johns—and, of course, poor- and middle-income johns, too: “I am open to decriminalizing sex work. Sex workers, like all workers, deserve autonomy and are particularly vulnerable to physical and financial abuse.”

We might translate some of this jargon-y code into simple English: “Sex work” is the politically correct way of saying prostitution, while “decriminalizing” really means legalizing, and “open to” means I’m in favor of it, but, I just can’t say so before the election.

So yes, legalizing prostitution is a part of Warren’s agenda. Indeed, at least four other Democrat presidential hopefuls—Cory Booker, Tulsi Gabbard, Kamala Harris, and Bernie Sanders—have also declared their support, to some degree or another, for sex-worker “decriminalization.”

Indeed, such decriminalization is on the Democrats’ to-do list in, of all places, the nation’s capital. Here’s a Washington Post headline from October 18: “D.C. leaders hear from public over proposal to decriminalize sex work.” As the article detailed, the Washington, DC, City Council will be voting on the matter in November.

Fortunately, passage of the measure is far from assured; in fact, opponents are vocal and articulate. One opponent, Toni Van Pelt, president of the National Organization for Women, was blunt about what would happen if the bill passes: “Because this demand [for paid sex] cannot be met locally, traffickers will bring prostituted women and girls from other jurisdictions.” And so, Van Pelt continued, “D.C., the capital of our nation, would undoubtedly become a sex tourism destination.”

In the words of another opponent, Yasmin Vafa, executive director of Rights4Girls, “This bill is a sex trafficker’s dream.”

All sides agree that prostitution practiced openly would reverberate well beyond the city’s thriving but shadowy sex industry of street prostitution, massage parlors, strip clubs and high-end call girls.  Prostitutes would most likely work openly out of homes in neighborhoods across the city.  Certain blocks could become de facto red-light districts.

In other words, D.C. wouldn’t just be the swamp, it would be the sex swamp. Yes, the reader can add any joke he or she might wish about politicians and/or lobbyists having new competition for whoredom, and yet still, it’s not amusing to think that the Washington Monument and the Lincoln Memorial would be joined by the Hooker Hotel.

Yet we can further add a class dimension to the matter. That is, legal prostitution streamlines the process by which the rich buy—or at least rent—the bodies of the non-rich. Not every rich person is a customer, of course; plenty of fat cats are happily, and loyally, married. And yet it’s also true that the rich tend to spend more money on everything.

Let’s ask ourselves: Who has the most money to spend on prostitutes? Who can bid the highest price for flesh? So we see more clearly that the rich have the most to gain from legalizing sex work.

A case in point is Bob Kraft, owner of the New England Patriots football team.

We all remember Kraft and his brush with the vice squad; back in February, the “masseuse” who allegedly serviced him was busted on a prostitution rap. As for Kraft himself, he had better lawyers, of course, and so he wasn’t arrested. Indeed, his pricy attorneys are battling with prosecutors as of this writing; back in May, they persuaded a judge to toss out the video evidence, and so there’s no way to know how Kraft’s case will ultimately be adjudicated. 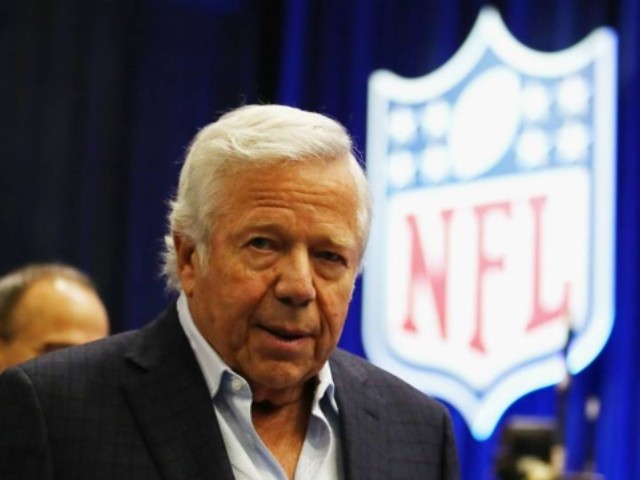 We just know this much: The optics have been horrible for Kraft. He would have been a lot happier if he could have just gone in and out, with no pesky police paying attention.

Of course, prostitution is not just for billionaires; it’s for any horndog with excess cash. And when it comes to disposable income, Democrats are way ahead. In fact, the ten richest congressional districts in the U.S. are represented by Democrats, as are 41 of the richest 50 districts. So with President Warren—or with any of the other pro-decriminalization Democrats–in the White House it seems likely that the laissez-faire approach to sex will become federal policy. And as we know, laissez-faire always works best for the rich.

Thus naughty Democrats, even non-plutocrats, would have a new category of pleasure on which to spend their money, legally.

To be sure, a pro-prostitution Department of Justice might not be able to override state and local laws (although, of course, we should never underestimate the power of liberal lawyers, working with liberal judges and the American Civil Liberties Union to think of tricky end-runs around traditional morality).

In any case, without a doubt, a Warren-ized DOJ would take some of the pressure off interstate and international and sex-trafficking. And that’s good news for Bob Kraft-types, both in America and coming from around the world.

Moreover, such a hands-off approach would be even better news for the next Jeffrey Epstein. We can recall that the late (we presume) Epstein had an international racket going, bringing in women and girls from Eastern Europe, and sending them on the “Lolita Express”—to the Caribbean, New Mexico, even Thailand—for pimpy purposes.

So while Warren and the other Democrats have said nothing about changing age-of-consent laws—sex with minors being the peculiar predilection of Epstein and, apparently, of other of his rich associates—it’s obvious that if prosecutors have fewer points of leverage on the sex trade, then Epstein-type abuses are more likely to emerge.

Thus we can see: Legalizing prostitution would be a great comfort to many among the comfortable.

Yet at the same time, Warren’s plan would further afflict the afflicted. Few, if any, women truly want to be prostitutes, and yet if the global magnet of money—complete with marketing and hyping—is turned on and allowed to operate at full power, well, a lot of women, and girls, will be pulled, and pushed, into prostitution. We can observe: This is not liberation, it’s degradation. It’s not empowerment, it’s a kind of slavery—indeed, it used to be called white slavery.

But wait—there’s more! More, that is, to the Democrats’ plan to comfort the comfortable. You see, not only does Warren want to decriminalize prostitution, she also wants to decriminalize crossing the U.S. border. In other words, every trans-national pimp and procurer will have an easier time bringing nubile bodies across the border—no nosy border guards asking questions and getting in the way.

Fittingly, on October 8, Breitbart News’s John Binder analyzed Warren’s overall immigration plan, dubbing it a “donor class immigration plan.” Notably, Warren’s plan doesn’t include mandatory E-Verify for employers and employees, and so once again, it will be all the easier for sex workers to work—having come from anywhere in the world, regardless of their legal status.

To sum up, Warren offers a trifecta for comforting the comfortable: First, legalize sex work; second, legalize anyone crossing the border; and third, do little if anything about hiring non-citizens.

So yes, if she wins, Warren may raise rich people’s taxes. And yet for the randier of the rich, it’s a sweet tradeoff; they’ll pay more in taxes, but her policy platform offers them a happy ending.