A public art installment that is traveling around the United States made a two-day stop in Washington, DC, this week to promote more immigration in the United States, ahead of the U.S. Supreme Court weighing in on the constitutionality of the Deferred Action for Childhood Arrivals or DACA.

President Barack Obama put DACA in place through executive action allowing hundreds of thousands of illegal immigrants to remain and work in the United States if they were brought to the United States illegally by their parents, dubbed Dreamers.

The “Common Ground” exhibit, a joint effort of the Koch brothers-funded Americans for Prosperity, the Libre Institute and Stand Together, uses ten videos behind ten doors to send messages about how immigrants make America stronger.

Behind Door Seven the video features U.S presidents promoting immigration, but Donald Trump is not one of them.

“But anyone from any corner of the Earth can come to live in America and become an American,” Reagan says.

“Our economy in stronger when we harness the talents and ingenuity of striving, hopeful immigrants,” President Barack Obama says in the video.

“We are a nation of immigrants but we are also a nation of laws,” President Bill Clinton says in the video.

“America can be a lawful society and a welcoming society at the same time,” President George W. Bush says.

“This I believe is one of the most important sources of America’s greatness,” Reagan says. “We lead the world because unique among nations we draw our people, our strength from every country and every corner of the world.”

Ironically, Reagan gave amnesty to millions of illegal immigrants with an expectation that lawmakers would reform the immigration to prevent more illegal immigration but since then the illegal population has ballooned from the approximately 3 million Reagan legalized to 11 million or more who are in the country illegally today. 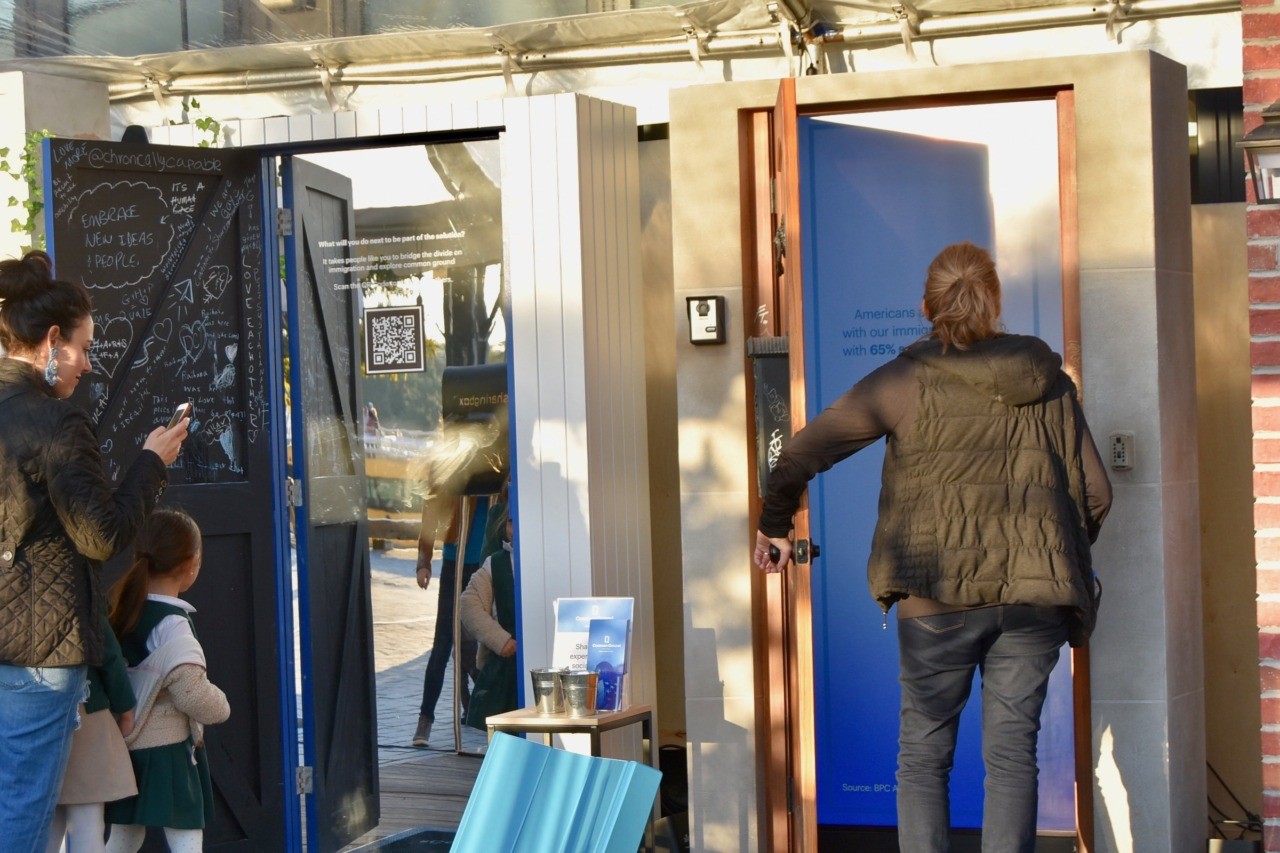 The “Common Ground” public art exhibit visited Washington, DC, last week to promote more immigration in the United States and in support of amnesty for those in the country illegally. (Penny Starr/Breitbart News)

The messaging point in the exhibit are taken from various polls, which do not always reflect all factors about the role immigration plays in the United States, including impacts on the job market.

Door 1: Meet Dreamers – 3 in 5 Americans support both a solution for Dreamers and a more secure border

Door 4: How Miami are You – A majority of Americans say that immigrants help the economy

Door 5: Friendships and Bonds – 93 percent of Americans agree that welcoming people from different cultures is an important aspect of the American way of life

Door 6: Fighting to Stay – Americans are frustrated with our immigration system, with 65 percent saying it is broken

Door 7: Shared Values – Over 75 percent off Americans believe that immigration is a good thing — a record high

Door 8: We all benefit – 2 out of 3 Americans say illegal immigration should stay or increase from current levels

Door 9: The Nashville Way – Immigrants in Tennessee contributed $527,400,000 to the state economy

Door 10: Nation’s Capitol – 75 percent of Americans believe that immigration is good for our country

“Everyone knows our immigration system isn’t working. The American public wants to fix it and Common Ground: Immigration serves as a platform for productive dialogue,” the exhibit website says.

“The premise is simple yet profound: If we focus on areas of common ground, rather than areas of division, we bridge divides, build respect for one another, and unite to solve the most pressing problems of our time.”

The High Court hears oral arguments on DACA on Tuesday with a ruling expected in 2020.