The billionaires who convened at Davos, Switzerland, are getting all the attention this week, but behind the scenes, the Deep State of the European Union, including its legal battalion, is tireless in its efforts to undermine the conservative-nationalist government of Hungary.

The Davos globalists—technically, attendees at the World Economic Forum, where President Trump and his nationalist message made a mostly unwelcome appearance on January 21—are cheering, of course, the hope that a nationalist government might be brought to heel, forced to bow down to Capital. It doesn’t have to be that way, of course; ordinary people in their nations might yet prevail in their fight against the fatcats. And yet if Davos is to be stopped, nationalists must know its ways.

Indeed, in the actions of the European Union’s Deep State, we see some of the same tactics that Virgil has been observing in the American Deep State, beginning in 2016. So if Americans wish to defend small “d” democracy, and small “r” republicanism, from the Deep State, we must understand the tactics being used against us. As they say, knowledge is power.

These Deep Statist tactics include the use of judicial and quasi-judicial decisions, emerging from the courts and from the bureaucracy, declaring that X, Y, or Z must happen. The idea is that these “legal” decisions must preempt popular sovereignty. That is, un-elected lawyers and bureaucrats take power away from political leaders, as well as from the people who voted for them.

This lawyered-up preemption happens all the time, on both sides of the Atlantic. Here in the U.S., it’s the story of how, for example, school busing came into being—it was the courts and bureaucrats, not elected officials, who imposed that policy.

Similarly, courts and bureaucrats have worked together to impose new (and usually costly) policies on everything from schools to prisons to homelessness. Indeed, back in the 1970s, the supreme court of New Jersey even managed to force the governor and legislature to impose a state income tax.

Today, the Deep Statists are still at it, augmented by a new and powerful ally: George Soros and his many billions. Soros is not unique in this posh activism, of course, and yet he’s emblematic of the larger phenomenon of “Woke Capital” seeking to buy up politicians and policy on behalf of its pet social justice causes. 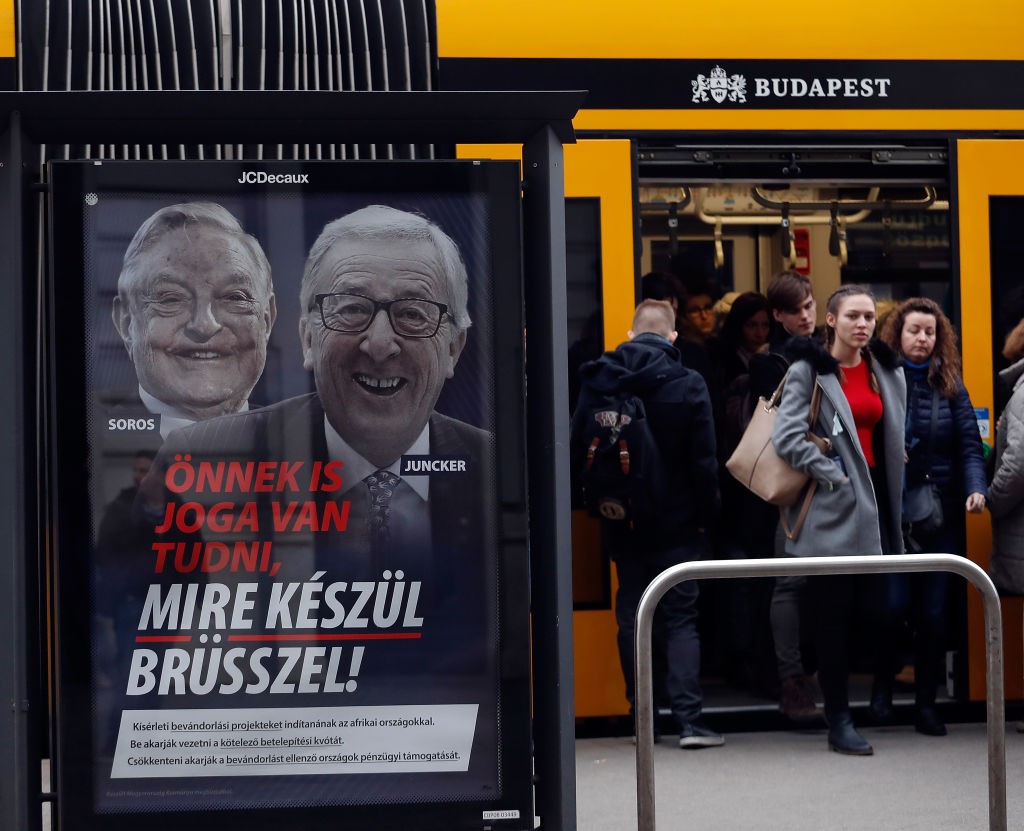 People leave from the tram next to a billboard with portraits of European Commission Chief Jean-Claude Juncker and Hungarian-born U.S. billionaire George Soros and a slogan reading “You too have a right to know what Brussels is preparing” on February 22, 2019, in Budapest. (Laszlo Balogh/Getty images)

A recent case in point is the January 14 decision by a top lawyer for the European Union, one Manuel Campos Sánchez-Bordona, who holds the title of Advocate General for the European Court of Justice, which is based in Luxembourg. And from Luxembourg, Sánchez-Bordona opined that Hungary violated E.U. law when it passed a law of its own, applying only to Hungary, that called for non-governmental organizations (NGOs) to register and disclose their financing.

Having shucked off communism three decades ago, Hungary is a free and democratic country, and yet at the same time, it is nationalistic and conservative. And so many foreign NGOs, pushing a liberal political and cultural agenda, have rankled the Hungarian people.

The biggest of these NGOs are those funded by George Soros (who was born in Hungary and has made that country a special target of his left-wing influencing).

Over the last four decades, Soros’s Open Society Foundations (OSF) have pushed, most controversially, open-borders policies on Europe, as well as America. And it’s that pushing that helped cause the backlash within Hungary—and elsewhere.

We should emphasize that OSF is enormously rich and powerful. Since the 1980s, OSF has spent $14 billion, and, just in 2017, Soros announced that he was giving it another $18 billion. So we can see: Soros and OSF can have massive impact anywhere, including in Hungary. As the late, great conservative intellectual Roger Scruton—eulogized here by Breitbart News’s Allum Bokhari—observed last year, “Anybody who doesn’t think that there’s a Soros empire in Hungary has not observed the facts.” [emphasis added]

Yes, Soros has an empire—an empire of money. That’s why, of course, he’s been such a welcome figure at Davos, because he is fluent in the theory and practice of globalism, eagerly using his “philanthropy” to further break down national boundaries.

In fact, in regard to plucky Hungary, Soros’s OSF doesn’t make any pretense of appealing to a democratic majority of Hungarians; it knows its globalist agenda plays poorly with nationalists. Instead, the Soros-funded entity has struck back by taking its anti-Hungary crusade to faraway E.U. courts. And there, far from Budapest, Soros’s money can facilitate legal activists and Deep Statists as they hash out legal opinions that inculpate Hungary in some conjured-up violation of some obscure E.U. rule.

Of course, high-placed, and high-priced, legal opinions are not the same thing as free and independent public opinion. And thus the fight is joined: OSF money vs. popular votes.

For his part, Hungary’s prime minister, Viktor Orbán, elected four times to that high office, has been a staunch opponent of Soros and OSF; he has even keyed some of his political campaigning to nationalistic denunciations of the financier, who lives in New York. Orbán, having been duly elected and reelected, has followed upon his mandate to place regulations on Sorosian activism—and that’s what the fight has been about. 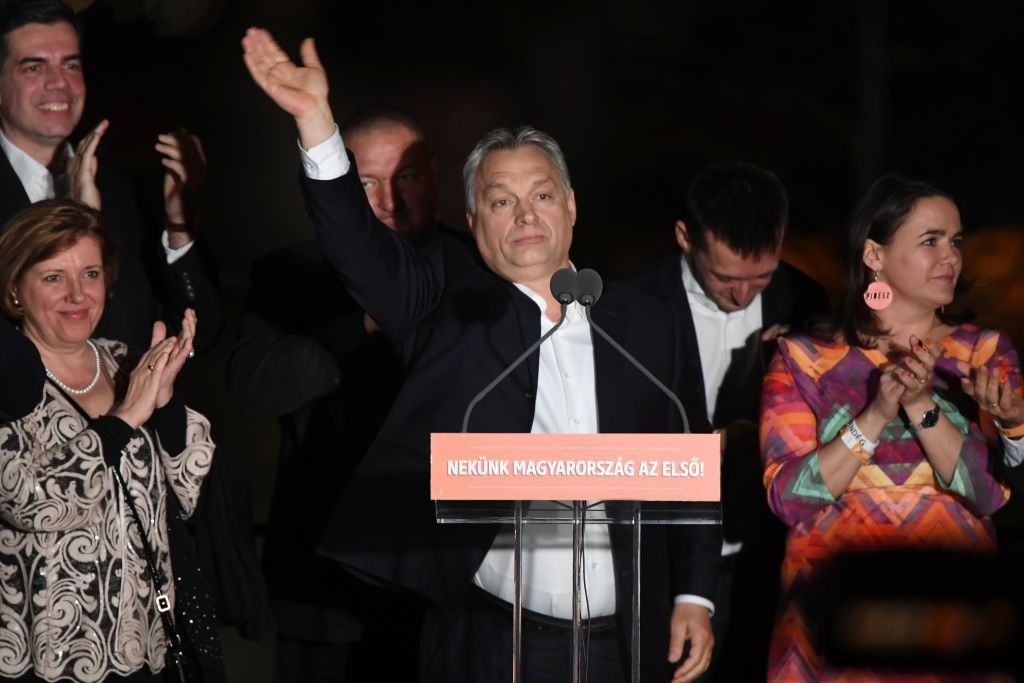 Viktor Orbán and members of his FIDESZ party celebrate from the podium after winning the parliamentary election on April 8, 2018, in Budapest. The words on the lectern read “Hungary is first for us!” (ATTILA KISBENEDEK/AFP via Getty Images)

We might note that Hungary’s law does not forbid NGOs from operating; the statute merely requires them to register and to disclose their funding sources. And yet as Sánchez-Bordona, the lawyer for the European Court of Justice declared, any such regulations violate “the free movement of capital.” Moreover, Sánchez-Bordona added, Hungary’s laws are “an interference in the private life of those persons as regards the processing of their personal data.”

Thus we see how the law can be used and abused in the hands of sharpie lawyers. That’s politics without transparency or accountability—which is exactly, of course, what Soros, OSF, and the E.U. Deep State desire.

The E.U. lawyer is saying that Soros’s billions should be treated as an investment—which, in a sense, they are. An investment, that is, in left-wing politics. And the E.U. man is further saying that any rules about disclosure would violate the “privacy” of those moving the money around.

In such a skewed view, the normal concerns that a nation might have about the protection of its political integrity—that its system be transparent and that politicians can’t hide subsidies, even outright bribes, behind “privacy”—are declared, by some arcane standard, to be “illegal.” Instead, the only “legal” course of action is to enable Soros to have his way, spending his money any way he pleases, no questions asked. We can assume that such rich American financiers as Mike Bloomberg and Tom Steyer—both now trying to buy their way into the White House—are paying close attention to these self-serving arguments, with an eye toward applying E.U. legal precedents to the U.S.

Virgil might add that it’s not just those two billionaires playing money games; even Bernie Sanders, a mere millionaire, is happily a part of the secret-money game. Hence this revealing headline in the January 21 Washington Post: “Sanders, a critic of secret money in politics, declines to call on a group supporting him to disclose its donors.” It seems that secrets about money aren’t so bad, even for leftists–so long as they’re keeping the secrets.

This is Woke Capital in action. And as an aside, Virgil might observe that Capital is not the same thing as Capitalism. Capitalism is the ongoing process of making things, and it presupposes a real-life Capitalist engaging in free enterprise, taking a chance, and perhaps making a profit—the whole virtuous cycle of risk and reward.

By contrast, Capital is different. Capital is accumulated money, and over time, as it passes through the hands of inheritors and successors, it loses its moral imperative. We can rightly celebrate living entrepreneurs, but we need not be worshipful of their legatees; that is, their heirs and trust-funders who start to resemble an aristocracy. Such hereditary aristocracy, of course, is potentially lethal to small “r” republican government.

We can agree that the owners of Capital have a right to their property, but society has a right to tax it and regulate it—including on the key issue of transparency in NGO funding—just as it does on any other sort of asset or income.

Moreover, the bankers and others who manage money have even less moral standing; they are just operators, operating funds that often become the fiscal equivalent of the legal term mortmain; that is, the dead hand. Indeed, by the time that Capital is so abstracted that it’s just a bunch of zeroes, one account vying with another for supremacy on the Forbes ranking, or seeking to one-up the other on Wokeness, maybe it’s time to blow the whistle on the whole thing before society is unhinged by trickle-down PC madness. (Here’s looking at you, Greta Thunberg, the new Queen of Davos.)

So yes, it’s scary to see all this Capital coming together at Davos and similar conclaves around the world, where billionaires crony up to high politicians, top international lawyers, and senior bureaucrats to decide what they think the world should do next. What have they decided in 2020? We’ll know soon enough, as their decisions trickle down onto the rest of us.

Working with Big Law and the Deep State, Woke Capital is seeking to buy, bribe, and sue Hungary into submission. And if these wealthy and well-funded forces can succeed there, they can succeed anywhere.

So sovereignty-minded Americans should realize: The new fight for Hungary’s independence is our fight, too.

We can win this fight, but we have to understand what we’re fighting.