The embattled chief of the World Health Organization (WHO), Tedros Adhanom Ghebreyesus, took time out from combating the spread of the Chinese coronavirus on Saturday to take a telephone call from pop star Lady Gaga and offer her birthday greetings and thanks for her support.

Tedros was effusive in his praise for the 33-year-old performer and her offers of strategic assistance to the globalist organization: 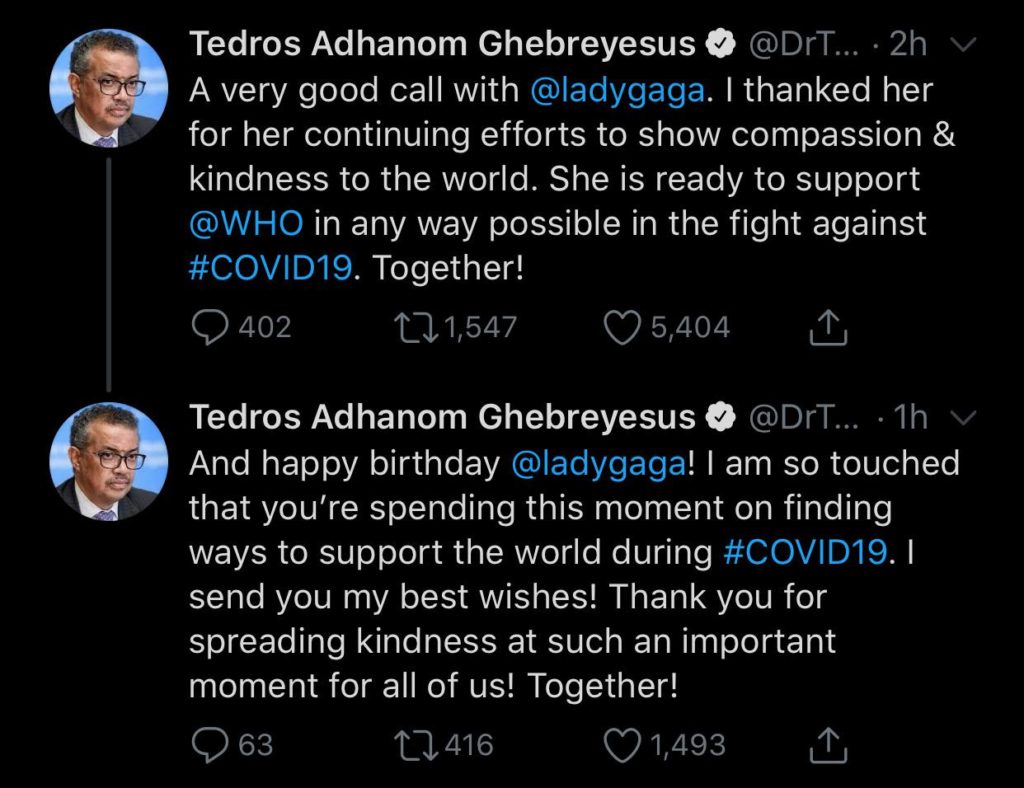 The exchange on social media came as Tedros faces calls to resign for allowing the Chinese Communist Party to influence WHO’s behavior during the viral epidemic now sweeping the world, as Breitbart News reported.

A petition calling for Tedros’ resignation and Taiwan’s full membership in WHO can be viewed at Change.org, which reported 650,000 signatures as of Sunday morning.

Criticism of WHO leadership at Taiwan News stretches back to February when an op-ed wondered why the organization was taking so long to declare a pandemic and a litany of obsequious remarks about China from top officials.

Cruz described the WHO director’s conduct as “deeply troubling” in a Twitter statement last Tuesday that linked to an article describing how Tedros got the job with extensive assistance from the Chinese Communist Party:

It is deeply troubling @WHO Director-General Tedros Adhanom Ghebreyesu is helping the Chinese Communist Party obfuscate the origins and trajectory of #COVID19, at the risk of health around the globe.https://t.co/gobeAmq7Pd

The Daily Caller article referenced by Cruz noted that Tedros “worked closely with China during his time as Ethiopia’s health minister,” won the election to become WHO director “despite widely covered accusations that he covered up three different cholera epidemics as health minister in Ethiopia,” was shamed out of tapping the monstrous Zimbabwean dictator Robert Mugabe to be a “goodwill ambassador” to the U.N. as a favor to Beijing, and is not even a medical doctor, although he has training in infectious disease response.

Senator Rubio and Rep. McCaul were quoted criticizing Tedros in a RealClearPolitics piece on Thursday. Rubio joined Cruz in labeling the director’s performance as “deeply disturbing.”

“The actions of the Chinese Communist Party exacerbated the public health crisis plaguing the international community, and instead of prioritizing global health, Dr. Tedros and the WHO played favoritism to China,” said Rubio.

For her part, Lady Gaga announced Tuesday she will delay the release of her sixth studio album Chromatica as a result of the epidemic, telling fans that it would not feel right to release it “with all that is going on during this global pandemic.”

In a post on social media, the singer – whose real name is Stefani Joanne Angelina Germanotta – explained she would prefer people to prioritize the purchase of essential goods such as food and medicine over her music.

Gaga is not the only musician who has had to make changes amid the global pandemic.

As Breitbart News reported, other artists including Madonna, Khalid, Billie Eilish, and the South Korean boyband BTS have all had to either postpone or outright cancel their upcoming tours to help prevent the virus’s spread.