The huge Deferred Action for Childhood Arrivals (DACA) amnesty should be preserved because it provides 27,000 healthcare workers to combat the coronavirus epidemic, say Joe Biden, pro-migration groups, and their allied media outlets.

“COVID-19 has laid bare the reality that the United States relies on [DACA migrant] Dreamers to function,” said a March 28 report in Slate. “It cannot respond responsibly to this pandemic without them.”

We know, beyond doubt, that we need every trained and qualified person we have fighting this virus — and that includes approximately 27,000 Dreamers who are working in hospitals and health care facilities all across our country thanks to their protections under Deferred Action for Childhood Arrivals (DACA).

If the Supreme Court upholds President Trump’s termination of DACA in the midst of a national public health emergency, it will leave a gaping hole in our health care system that is liable to cost American lives.

The claims are part of a last-minute PR campaign to save the DACA amnesty program from the Supreme Court. The court is expected to announce soon that President Donald Trump has the legal right — and perhaps the legal obligation — to end the 2012 amnesty that was created by former President Barack Obama in the run-up to the 2012 election.

The 2012 DACA amnesty provided work permits to adults who were bought to the United States as children by their illegal immigrant parents — despite the harmful impact on blue-collar wages and job prospects during the slow, post-2008 recovery.

The original estimate of 27,000 healthcare workers came from the Democrat-affiliated Center for American Progress (CAP). In September 2019, the center claimed, “According to the CAP analysis of ACS microdata … health care practitioner and support occupations [have] 27,000 DACA recipients employed.”

The CAP did not detail the jobs or the “support occupations” held by the 27,000 DACA migrants, nor did it estimate how many of those jobs would be performed at higher wages by Americans if the DACA migrants were to return with their parents’ to their home countries.

However, a group of U.S. medical colleges admitted in 2019 that the DACA population includes just 200 doctors and medical students — along with “home health aides” and technicians. The admission came in a November 2019 submission to the Supreme Court which also cited the 27,000 claim:

Among those 27,000 are nurses, dentists, pharmacists, physician assistants, home health aides, technicians, and others.

The number also includes nearly 200 medical students, medical residents, and physicians who depend on DACA for their eligibility to practice medicine.

Roughly 500,000 DACA recipients are older than 23. So the 200 DACA doctors or medical students add up to one-half of one doctor for every 1,000 people older than 23 in the DACA population.

In comparison, the 210 million Americans older than 25 have produced roughly 600,000 doctors or three doctors per thousand people. That 600,000 number excludes thousands of American doctors who were denied gateway jobs that were given to foreign doctors in the annual matching programs.

Congress is stingy about funding hospital residencies for medical graduates — so 1,000+ doctors fail to get residencies at hospitals in 2020.
That puts many young doctors on the sidelines during a national epidemic.
But Congress has a fix. https://t.co/acDmO0YcIO

The CAP activist did not respond to questions from Breitbart News about the number of DACA migrants in each job occupation.

The skills and jobs of the DACA migrants are subject to some controversy.

Some activists rely on skewed data to paint a rosy picture, while better studies show a population with few skilled workers — partly because the DACA migrants have been illegal migrants for many years.

An August 2017 report by the Migration Policy Institute shows that only 9,000 of 571,000 “immediately eligible” DACA migrants held jobs as “health-care practitioners and technical occupations.” Another 11,000 worked in “health-care support occupations.” 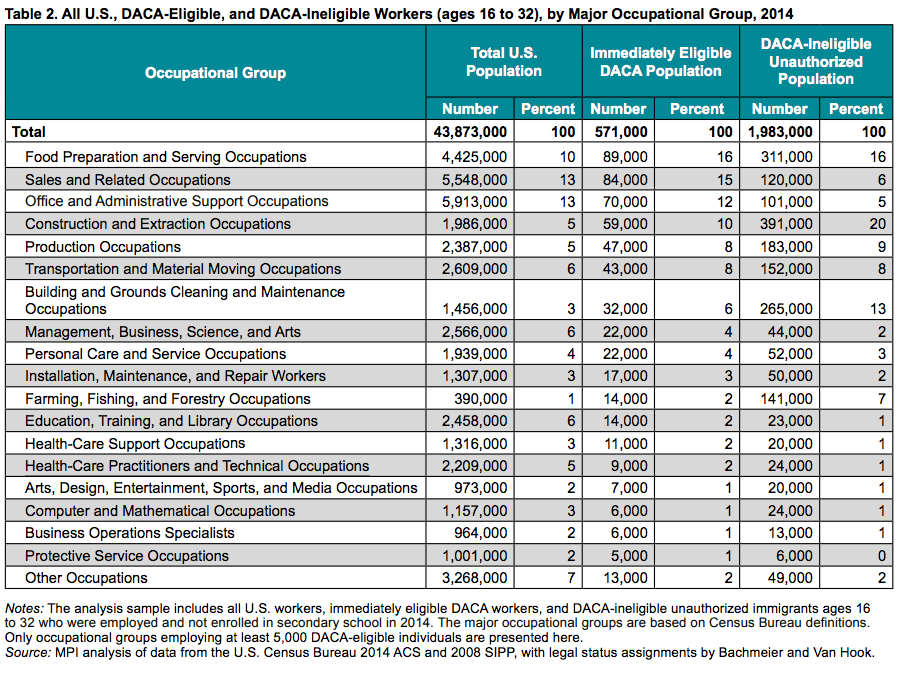 The Bureau of Labor Statistics lists a variety of jobs in “health-care support occupations,” and says their average wage is just $30,000.

However, many media outlets are parroting the unexplained claim by the CAP advocacy group — and are exaggerating the number of DACA medical professionals while downplaying the admission that the 27,000 estimate includes briefly trained “health aides” who help elderly people.

Adam Liptak, a reporter in the New York Times, repeated the claim March 27:

WASHINGTON — Aldo Martinez, a paramedic in Fort Myers, Fla., is one of about 27,000 young undocumented immigrants known as Dreamers who work in health care, many of them on the front lines in the fight against the coronavirus pandemic.

Mr. Martinez said it would be foolish to take an army of doctors, nurses, pharmacists, technicians, researchers and other health care workers off the battlefield in the middle of a pandemic.

In a March 28 report in Slate, author Mark Joseph Stern posted a similar subheadline: “27,000 DACA recipients work in health care. If they lose their status, even more patients may die.” He continued:

This group is now entrenched in American life—and vital to its health care system. In a letter filed with the court, the lawyers noted that about “27,000 DACA recipients are health care workers—including nurses, dentists, pharmacists, physician assistants, home health aides, technicians, and other staff—and nearly 200 are medical students, residents, and physicians.”

COVID-19 has laid bare the reality that the United States relies on Dreamers to function. It cannot respond responsibly to this pandemic without them.

A March 27 letter by pro-migration lawyers to the Supreme Court said:

An estimated 27,000 DACA recipients working as doctors, nurses, paramedics and other health care workers, is full of irony. At a time when her adopted country needs her most, [Veronica Velasquez, a physical therapist] could be pulled from the workforce.

The Washington Monthly posted an article March 24 by a CAP employee who claimed:

A Center for American Progress analysis from 2017 found that roughly 27,000 DACA recipients are health care practitioners, including physicians. Their vulnerability was a problem long before the coronavirus; the Association of American Medical Colleges concluded in a study last year that the United States will see a shortage of up to nearly 122,000 physicians by 2032. Now, the global pandemic threatens to make this problem even worse. The prospect of losing DACA has long been a concern for Ali-Reza Torabi. More recently, however, the 29-year-old medical student has worried about the impact the disease will have on his community.

But media outlets have been parroting the CAP claims for many months.

About 27,000 of these “dreamers,” as DACA enrollees are known, work in health-care provider and support occupations, according to an analysis of census data by the left-leaning Center for American Progress. Another 200 dreamers are in medical school or participating in residencies.

The Washington Post published a November op-ed by the president and CEO of the Association of American Medical Colleges, who said:

Today there are approximately 27,000 doctors, nurses, dentists, physician assistants and other health-care workers whose DACA status allows them to work and contribute to patient care. The program also is enabling nearly 200 current medical students and medical residents to pursue careers in medicine.

H-1B contractors & fired visa-workers are lobbying Trump's admin so they can stay for 6 months to grab white-collar jobs in the coronavirus recovery.
US college grads lose out whenever complacent US execs. outsource hiring to India's labor brokers.#H1Bhttps://t.co/YmRM85vK9J