Rob Cortis has replaced his truck’s engine three times while driving over 260,000 miles across America in support of President Donald Trump.

Breitbart News talked with Cortis while he was making an appearance at a protest at Grand Haven State Park where Michigan Gov. Gretchen Whitmer’s shutdown orders have closed a parking lot convenient for beachgoers.

Cortis said the Trump Unity Bridge, which is a massive collection of Trump and pro-America gear on a float, has traveled across America and was designed to help get President Trump elected.

“Once elected, I knew that he was going to have problems with his agenda,” the Livonia, Michigan, resident said.

Cortis told Breitbart News he was on his way to meet President Trump in Calexico, California, when his engine blew up in Abilene, Texas. 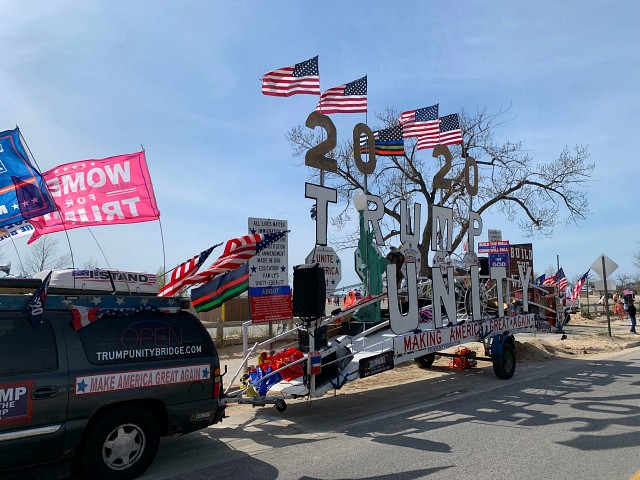 He said he took into a dealership there, “and I got a call 23 hours later” that it was repaired.

“That’s what American patriots are all about,” he said.

Cortis accepts donations so he can stay on the road promoting Trump.

In Grand Haven, Cortis was offering “President Trump 2020” masks as a fundraiser for his efforts, which he said are available on his website.

“If everybody wears a Trump 2020 mask, you know what’s going to happen? CNN’s going to start announcing, ‘You don’t have to wear masks anymore,'” he said.

“Wear a Trump 2020 mask, the quarantine will be over,” Cortis said.

The Trump Unity Bridge is known for blasting patriotic songs, but Cortis ran into trouble with the Grand Have police because he was allegedly violating the noise ordinance. He asked to park in the cordoned off lot so he would be in compliance, but they refused.

“I’m really passionate about America. I love our country; I love our president,” he said.