A judge in Richmond, Virginia, on Monday temporarily blocked Gov. Ralph Northam’s order to tear down a statue of Confederate Gen. Robert E. Lee that has towered over a traffic circle since it was erected 130 years ago.

Northam, who is still in office despite his past blackface antics, ordered on Thursday the statue to be removed because “it was wrong then and it is wrong now.”

Richmond Circuit Judge Bradley B. Cavedo ordered a ten-day injunction after William C. Gregory filed a lawsuit claiming the deed for the land included a promise to “affectionately protect” the statue.

Gregory is the great-grandson of a man and woman who were signatories on the deed, according to the Washington Post:

The 14-foot equestrian statue and its 50-foot base stand atop land annexed from Henrico County in 1890. In the deed recording for the land transfer, the state “guaranteed” to “hold said statue and pedestal and circle of ground perpetually sacred to the monumental purpose” and to “faithfully guard it and affectionately protect it,” Gregory’s lawyer, Joseph E. Blackburn Jr., argued in a court filing Monday.

“Our administration is still reviewing the order,” Northam spokeswoman Alena Yarmosky said. “Governor Northam remains committed to removing this divisive symbol from Virginia’s capital city, and we’re confident in his authority to do so.”

According to the website of the Monument Avenue Preservation Society, preparations for the memorial began when Lee died in 1870, but drawing up plans, selecting a sculptor and finding a site took the better part of 17 years. Eventually, the city annexed 292 acres from Henrico County to put the statue on what had been a baseball field on the edge of tobacco farms.

The removal seemed imminent as signage was being installed to prevent parking at certain hours and nearby homeowners told the Post they were advised about the plan. 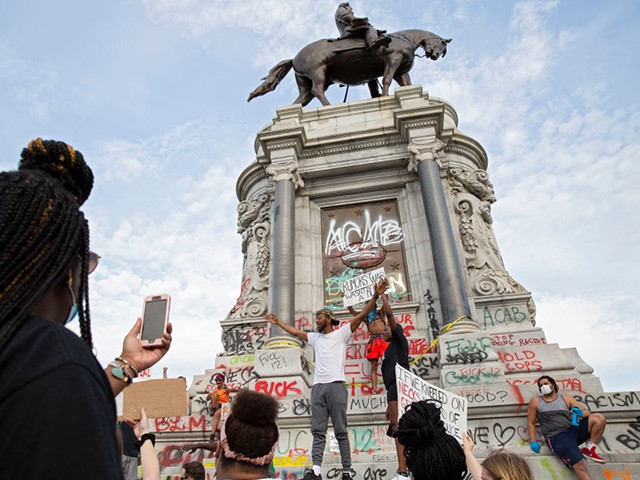 The Hill reported that the statue had been vandalized with graffiti during the past two weeks during protests over the death of a black man, George Floyd, who died at the hands of Minneapolis police.

There are other statues of Confederate leaders on Monument Avenue, including those of J. E. B. Stuart, Jefferson Davis, and Thomas “Stonewall” Jackson.