Los Angeles mayor Eric Garcetti is attempting to make peace with members of the Los Angeles Police Department after maligning them as “killers” and retroactively taking away their overtime pay following several days of Black Lives Matter protests and riots.

The Democrat mayor, who has also proposed to defund the LAPD by as much as $150 million, sent a letter to all police personnel on Thursday praising them for their “tireless work and commitment” while also inviting them to participate in a “reimagined and strengthened vision of public safety.” 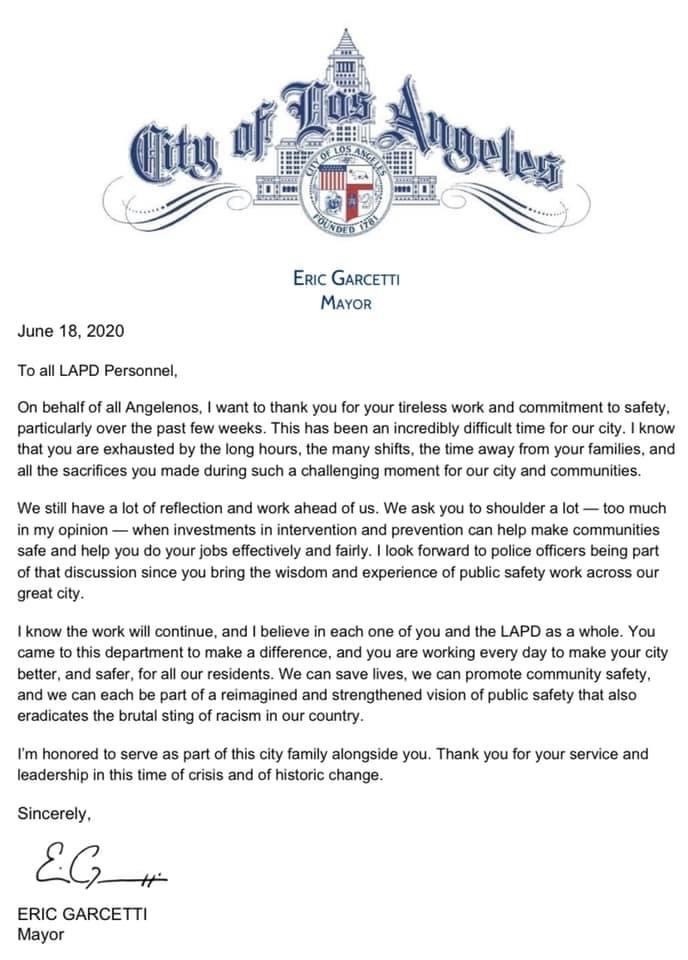 Garcetti wrote in the letter:

This has been an incredibly difficult time for our city. I know that you are exhausted by the long hours, the many shifts, the time away from your families, and all the sacrifices you made during such a challenging moment for our cities and our communities.

Garcetti said that he wants police officers to take part in his new vision for public safety that he hopes will help to eradicate “the brutal sting of racism in our country.”

The mayor is facing fierce criticism from LAPD members for his inflammatory words and cuts to their compensation. LAPD morale has plummeted in recent weeks as rank-and-file officers increasingly feel that City Hall has thrown them under the bus to appease Black Lives Matter protesters and rioters.

In one instance, the city has reassigned ten officers from patrol duty to work inside police stations while internal affairs reviews complaints that those officers allegedly used excessive force during the recent protests.

An LAPD officer told Breitbart News that he is “deeply and personally offended” by Garcetti’s rhetoric, which he described as “condescending, anti-police, and anti-American.”

“His embracing of groups like BLM and Antifa is antithetical to law and order, and the safety and security of our most vulnerable citizens, in the most economically depressed parts of the city,” the officer said. “His selling out of the Patrol Officers has destroyed LAPD morale. The kicker is we would give our lives for any citizen in the city of Los Angeles. And many LAPD cops have. And the fact that this mayor continually bashes us, and sides with BLM and Antifa, is, or should be, a slap in the face to every Angeleno.”

The officer added: “We cops will not be abused any longer, and he will reap what he [has] sewn! Which is division. He and the City Council members who have joined him in vilifying the LAPD rank and file are an embarrassment to us all.”

Garcetti angered many LAPD members when he called them “killers” during a recent meeting with local black leaders.

“He’s clearly unstable. We are worried about him and worried about his future, and the safety of our citizens,” LA Police Protective League Director Jamie McBride said. “He is more interested in his image and how he’s looked upon, as opposed to being a leader in difficult times.”

Last week, the city retroactively canceled LAPD overtime pay after exceeding its overtime budget. The city also cancelled all nonessential overtime across the board, with the exception of the Metropolitan Transportation Authority.

Garcetti has also proposed slashing the LAPD’s budget by as much as $150 million as left-wing activists demand the defunding of police departments around the country.

The L.A. City Council voted on Tuesday to study ways to slash the LAPD’s budget by $100 million to $150 million.

One budget proposal that is gaining steam is the People’s Budget LA, which is backed by the L.A. chapter of Black Lives Matter. The proposal would slash the LAPD’s funding by 90 percent and reallocate money to social services.