The city of Los Angeles is adding insult to injury to its treatment of police officers by retroactively defunding Los Angeles Police Department (LAPD) overtime following days of #BlackLivesMatter protests and riots, according to an internal letter obtained by Breitbart News.

LAPD Chief Michel Moore said in the letter that the department’s overtime has surpassed $40 million in recent days, which “far exceeds any budgetary reserve to address unusual occurrences”: 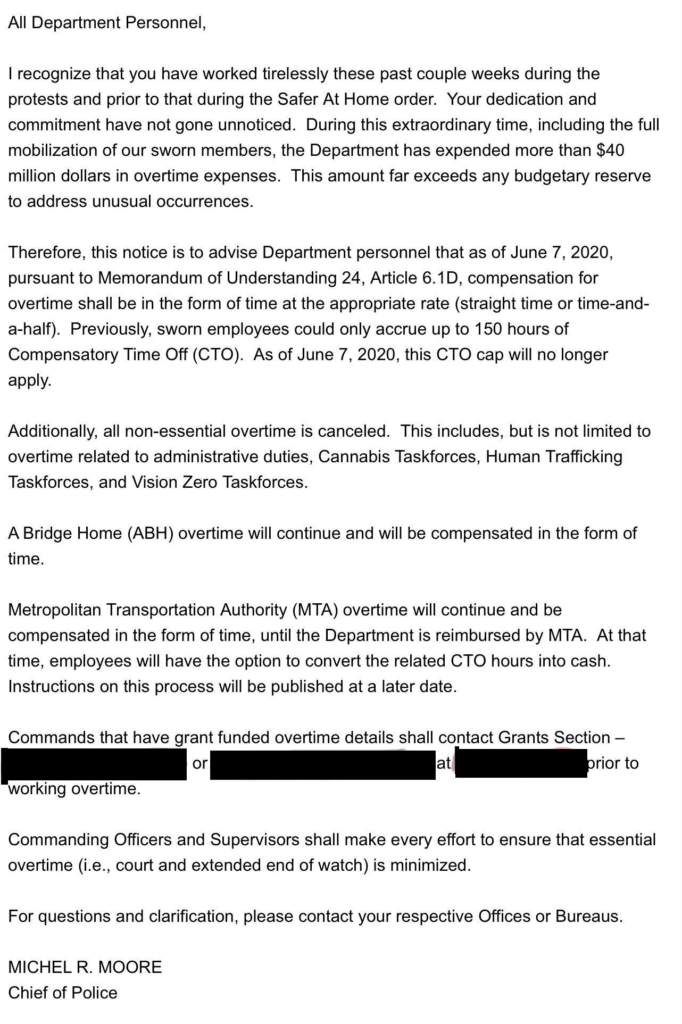 Moore called the past several days “extraordinary” but didn’t specifically name the #BlackLivesMatter protests that have consumed LA for more than a week following the death of George Floyd while in Minneapolis police custody.

As a result, the LAPD said that starting retroactively as of June 7, overtime will be paid “in the form of time at the appropriate rate,” which it said will either be straight time or time-and-a-half.

That means instead of being paid the full overtime amount in cash, officers will now have to bank the difference that can be used as future time off or that will be paid upon retirement, two sources familiar with the situation told Breitbart News.

The LAPD is also cancelling all nonessential overtime across the board, with the exception of the Metropolitan Transportation Authority.

LA city is allowed to make these overtime changes under its bargaining agreement, and has done so in the past when it has run out of cash. But the decision has nevertheless angered police personnel who have worked around the clock in recent days to ensure public safety during the #BlackLivesMatter protests and riots.

An LAPD officer told Breitbart News, “Guys and gals are beyond pissed…. many are actively looking to quit and go to another department. Some in, and some out of state.”

The overtime policy may shift again when the city begins its new fiscal year July 1. The LAPD’s financial outlook remains murky following Mayor Eric Garcetti’s (D) proposal to slash the department’s budget by as much as $150 million in response to calls by left-wing activists to defund police departments around the country.

“He’s clearly unstable. We are worried about him and worried about his future, and the safety of our citizens,” LA Police Protective League Director Jamie McBride said. “He is more interested in his image and how he’s looked upon, as opposed to being a leader in difficult times.”