Rioters attempted to topple a statue of Andrew Jackson in Lafayette Park near the White House on Monday evening in Washington, DC, before being dispersed by police.

The statue depicts Jackson in uniform astride a horse at the Battle of New Orleans in 1815, one of the most important battles of the War of 1812.

In the battle, American defenders under Jackson’s command routed British invaders. Though the battle technically took place after the war had ended — thanks to the slow communications of the era — it firmly established American military prowess and played a role in burnishing Jackson’s credentials as a military leader.

#BREAKING: Protesters have opened the fence surrounding the Andrew Jackson statue in Lafayette Square and have climbed on top.

I’ve heard them say they’re trying to tear it down. @wusa9 #BlackLivesMatter pic.twitter.com/i8cBlM171b

#breaking: Police clash with protesters in Washington D.C.’s Lafayette Park, police moving in to stop protesters from pulling down the equestrian statue of General Andrew Jackson at the Battle of New Orleans. pic.twitter.com/UosFeQQM5u

They shouted: “This is what democracy looks like!”; “No justice, no peace!”; and “Hands up, don’t shoot!”

The latter is a reference to the shooting death of Michael Brown in Ferguson, Missouri, in 2014. Brown was killed while charging a police officer whose gun he had attempted to take, but activists claimed falsely that he had been shot in the back with his hands raised in surrender. The event launched the Black Lives Matter movement.

U.S. Park Police deployed pepper spray to disperse the crowd. Some of the rioters appeared armed. 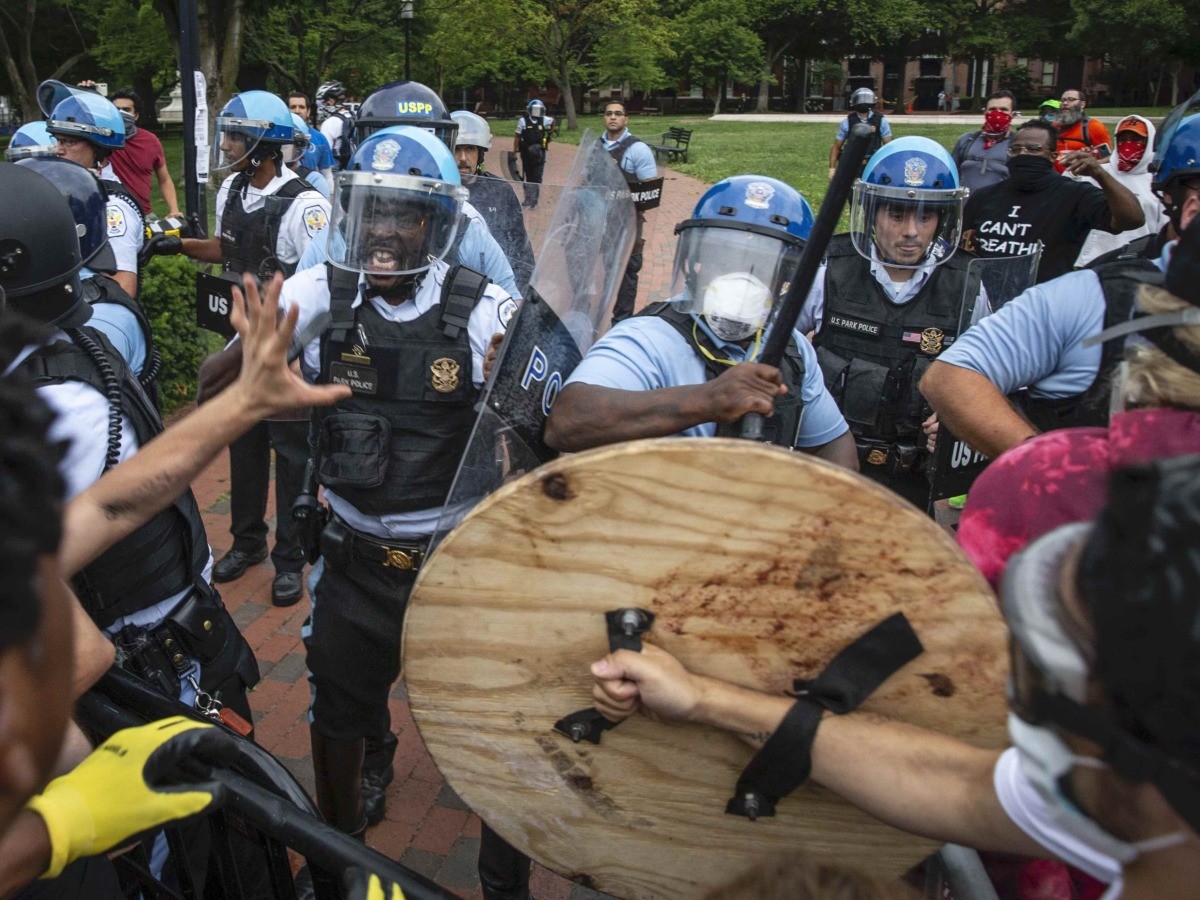 WASHINGTON, DC – JUNE 22: Protesters clash with U.S. Park Police after protesters attempted to pull down the statue of Andrew Jackson in Lafayette Square near the White House on June 22, 2020 in Washington, DC. Protests continue around the country over the deaths of African Americans while in police custody. (Photo by Tasos Katopodis /Getty Images)

Some of the rioters wore white helmets with red crosses and administered first aid to those who had been sprayed.

Nearby, the St. John’s Episcopal Church, damaged in a fire set by rioters on May 31, was vandalized:

D.C. Metro Police assisted in moving rioters back. They were accosted by protesters:

Two women are screaming at the cops outside the White House. pic.twitter.com/V9wTsoFDzf

On June 1, President Trump walked through Lafayette Square after it had been cleared of protesters and stood in front of the damaged church, holding a Bible aloft.

Mayor Muriel Bowser subsequently declared the plaza in front of the park Black Lives Matter Plaza, and allowed protesters to paint “BLACK LIVES MATTER” on the street. Some later added “DEFUND THE POLICE.”

Separately, police removed tents near Black Lives Matter that were set up Monday as an attempt to establish a “Black House Autonomous Zone,” or “BHAZ,” named after the Capitol Hill Autonomous Zone (CHAZ) in Seattle.

The CHAZ is now known as the Capitol Hill Occupied Protest (CHOP).