Now would be a real good time to do whatever is necessary to obtain a permit to legally carry a handgun.

You know, I’ve never been a big fan of guns. It’s not political. I’m not a car guy, either. My passions are watching movies and reading biographies. I’m not a total metrosexual. I also enjoy increasing the value and comfort of my home with construction and remodeling projects.

I purchased my first gun not long after I got married. In the years since, due to various events (explained here), I’ve picked up nearly a half-dozen more – including three just last month.

Listen, it takes about eight seconds for someone to break into your home. So, in today’s world, a world where Democrats and the establishment media have no desire to stop roving bands of marauders, have embraced the terrorists of Black Lives Matter and Antifa as their own personal Brownshirts, I do not ever intend to be more than three seconds from a firearm.

As I write this, I have another firearm on order and have permits for four more.

I’ll never become a gun enthusiast. It’s just not in my DNA – even though my dad is both a gun and car enthusiast. Nevertheless, I still very much recommend that you, as I have, go through the process to obtain a permit to legally carry a gun. I’ll explain why in a bit, but here’s some information about the process. 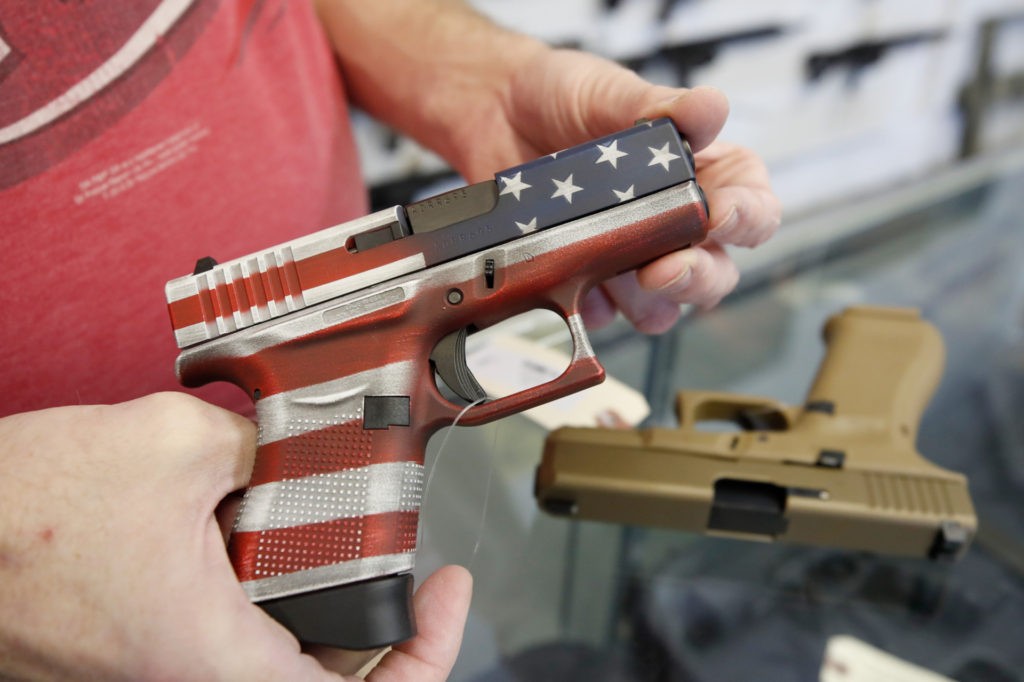 A worker restocks handguns at Davidson Defense in Orem, Utah. – Gun stores in the U.S. are reporting a surge in sales of firearms as coronavirus fears trigger personal safety concerns. (GEORGE FREY/AFP via Getty Images)

Here in North Carolina the process was fairly easy – two stages. The first involved an all-day training class. This cost about $60. Half the day was spent learning about how to safely carry, handle, store, clean and shoot a handgun. This included firing off 30 rounds. After lunch, we were instructed on the nuances of gun laws i.e., when it is and is not okay to shoot a mofo, and what to do after you shoot a mofo.

(Step 1: Take advantage of your right to remain silent until your attorney arrives). You might think you understand the laws. You don’t.

The most memorable part of the class was when our ex-cop instructor explained the emotional consequences of – not just wounding or killing someone, but unholstering your weapon in a confrontation. He made it very clear, life is not TV; this is the last situation you want to find yourself in.

This class is not a waste of time.

Step two is applying for the permit. If memory serves, this cost about $80. In my county, this means you bring an application and the certificate proving you attended the gun safety class to the sheriff’s department. From there you are fingerprinted and then wait for the application to be approved. Once it is, your permit arrives in the mail.

Thanks to cooperation between those states in our union that believe in civil rights, my North Carolina permit is also legal in these other states.

How this works varies by state, so look it up….

And here’s why you should…

Every American should own one firearm for home protection. That’s the least you should do. But it is imperative you also learn how to operate, store, and handle that firearm safely, and that you know the laws and your rights.

Even if you don’t go all the way in carrying a concealed handgun, the training class is a must; so why not get your permit now (while you still can) just in case you want it later? Just in case things get worse…?

Because things are going to get worse, a lot worse… And if Democrats assume power, when it comes to protecting ourselves, we will be on our own like never before – even more than we are already.