After more than 15 years since Congress passed the REAL ID Act [in 2005], all 50 states are now in full compliance issuing these cards, with most states becoming compliant in the last four years,” said the agency statement, that continued:

On October 1, 2021 – less than 13 months away – full enforcement of REAL ID will take effect at all federally regulated airports, federal facilities, and nuclear power plants.

Americans need to get licenses that meet the REAL ID standard by October. If not, they will be unable to enter federal facilities, including transport aircraft.

“Passed by Congress in 2005 following a 9/11 Commission recommendation, the REAL ID Act establishes minimum security standards for state-issued driver’s licenses and identification cards and prohibits federal agencies, like the Transportation Security Administration, from accepting licenses and identification cards for official purposes from states that do not meet these standards after specific deadlines,” outlined DHS. 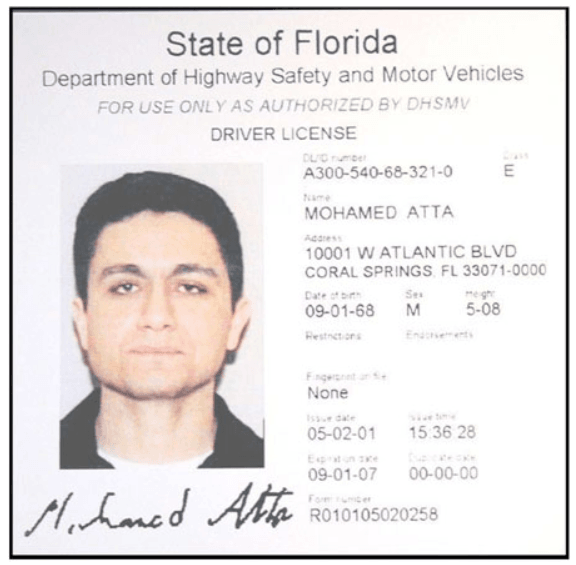 The Center for Immigration Studies explained the problem:

All four 9/11 pilots had Florida driver’s licenses, including, of course, the operational leader and first World Trade Center pilot, Mohamed Atta. This is Florida’s record of Atta’s driver’s license:

Eight other muscle hijackers had Florida IDs as well.

In sum, there were 30 state-issued IDs among the 19 hijackers:

18 driver’s licenses/IDs issued from Florida’s DMV, five of which were duplicates.
Eight IDs issued from Virginia’s DMV, all in August 2001.
Two driver’s licenses issued in California to Hazmi and Mihdhar, both watchlisted.
Hanjour, the Pentagon pilot, had four state-issued IDs, including one each from Arizona and Maryland, and was the only hijacker to attempt to take the Virginia driver’s license test (he failed).