A survey published this weekend by the Venezuelan polling firm Meganálisis found that María Corina Machado, a conservative opposition party leader, inspired the most confidence in Venezuelans who want the ruling Maduro regime removed.

Fewer than three times the number of people who responded positively to the assertion that Machado “has credibility and inspires confidence” did the same for Juan Guaidó, the man legally occupying the presidency of Venezuela. Machado was also three times as popular as Henrique Capriles Radonski, a two-timed failed presidential candidate leading a rogue opposition wing’s participation in dictator Nicolás Maduro’s unfree December legislative elections. Machado inspired significantly less confidence than the answer “nobody,” which over half of the respondents answered.

Machado’s popularity may prove problematic to President Donald Trump, whose administration has vocally supported Guaidó. Trump’s top official on Venezuela, longtime DC insider Elliott Abrams, insulted Machado as lazy and her policies as fantastical in an appearance on Venezuelan television last month. He remains in his post despite his undiplomatic display and has yet to apologize.

The Megánalisis poll found Venezuelans largely united ideologically. Nearly 80 percent of respondents said they wished to see Maduro and the socialist chavista establishment leave power before the end of the year. A similar number, 77.55 percent, responded “no” to the question, “Do you want Venezuela to be socialist?” Of those who said no, most (72 percent) said they wished to see “capitalism” as the ruling ideology of Venezuela.

The results stand in stark contrast to reports in mainstream media claiming that Venezuela’s opposition to Maduro is largely divided. While leaders publicly disagree on strategies to remove Maduro and openly vie for power, average Venezuelans seem to agree on both tactic and their general disgust with opposition leaders. A plurality of those who oppose Maduro believe opposition leaders “work for Maduro.” 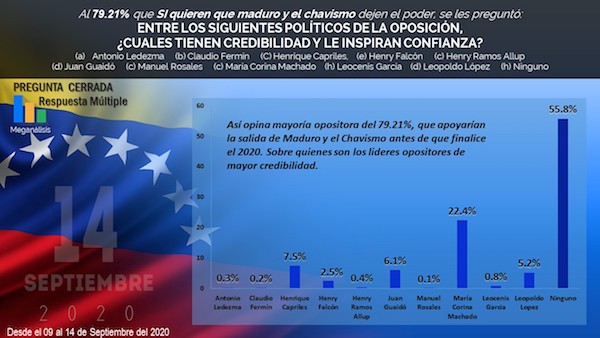 The polling firm asked the 80 percent of those who said they wished to see Maduro out of power which opposition leader “has credibility and inspires confidence.” By far the most popular opposition leader was “nobody,” receiving 55.8 percent of the vote. Coming in second place was Machado, the head of the center-right Vente Venezuela party, with 22.4 percent of respondents agreeing that she inspired confidence. Other than “nobody,” Machado was the only person to break into the double digits; 7.5 percent responded positively to Capriles, 6.1 percent to Guaidó, and 5.2 percent to Leopoldo López, a former political prisoner and leader of the Popular Will party. Guaidó left Popular Will this year, allegedly to focus on removing Maduro from power.

Popular Will is an official member party of the Socialist International. Capriles is a member of Justice First, a progressive political party.

Another shocking finding from the poll was that over half of those who support seeing Maduro leave power believe that the establishment opposition is actively profiting from the status quo. Asked, “When people on the street say that the majority of opposition politicians are sell-outs to the government and work for Maduro, do you believe that to be true?”, 61.9 percent said yes. About a third (33.5 percent) said no.

Asked about the opposition leaders’ ideologies, and not just them as people, Venezuelans again chose Machado. Meganálisis asked respondents who said they wished to see Maduro out of power to choose the path they believe would be most successful in removing him. “Solicit a foreign intervention,” Machado’s policy, received 59.2 percent support. Following that, Capriles’ call to participate in Maduro-run elections received 13.3 percent. More people, 8.5 percent, said “there is no way to remove Maduro” than those who said reasserting Guaidó’s legitimacy to the presidency (5.9 percent) would be the best way to remove Maduro.

This result is consistent with past Meganálisis polling. In May 2019 — following a failed attempt by Guaidó and López to wrestle control of the Venezuelan Armed Forces out of Maduro’s hands — 89.5 percent of Venezuelans said they supported a foreign military intervention to oust Maduro.

Elliott Abrams addressed the proposal for a foreign military removal of Maduro in an interview with Venezuela’s NTN24 News at the beginning of the month, implying that María Corina Machado was too lazy to fix her own country in response to her calls for invoking international treaties to oust Maduro. At the time, Guaidó had backtracked from public remarks opposing participation in a Maduro-organized election and met with Machado to convince Vente Venezuela to run candidates in the legislative race. Machado rejected the offer.

“But I am reminded of Gabriel García Márquez and the famous magical realism,” Abrams said or Machado’s refusal to participate in rigged election. “What it seems to us the opposition needs to do is the very hard work of organizing opposition under a very repressive and brutal regime. And María Corina, seems to me, is calling for a kind of magical plan B that is going to solve all the problems of Venezuela and who is going to do the solving? Foreigners who intervene.”

“Venezuelans understand the nature of the Maduro regime and they understand how hard it is to organize opposition to it. … So the task is very hard but it doesn’t make the task easier when Venezuelan opposition political leaders basically say ‘I don’t want to do that work, I want a magical rescue,’” Abrams asserted.

Magical realism is a literary movement in which elements of the fantastical are applied to an otherwise real-life situation, typically associated with Latin America.

Machado has listed several international treaties that require foreign countries — most of them South American neighbors — to help the legitimate government of Venezuela against criminal or terrorist organizations. Machado has mostly called for Guaidó to invoke the Inter-American Treaty of Reciprocal Assistance (TIAR) as president of Venezuela to help oust Maduro and notes Maduro’s known ties to the Revolutionary Armed Forces of Colombia (FARC), Brazilian drug gangs like the First Capital Command (PCC), and the jihadist organization Hezbollah make him a legitimate target.

Most Venezuelans agree, according to the poll released this week.

“Recently, some spokesmen of the Trump administration have been saying, ‘well, this could be a fantasy,’” Machado said in a CNN interview responding to Abrams. “The fantasy is believing that this regime will leave through any other mechanism than the construction of a real threat.”

Machado asserted that Abrams was working to “undermine the very policy of President Trump, who has committed to the liberation of Venezuela.”