Newly obtained emails from a Hunter Biden business partner lay out in detail how the Vice President’s son and his colleagues used their access to the Obama-Biden administration to arrange private meetings for potential foreign clients and investors at the highest levels in the White House. These never-before-revealed emails outline how a delegation of Chinese investors and Communist Party officials managed to secure a private, off-the-books meeting with then-Vice President Joe Biden.

In a 2011 email, Hunter Biden’s business associates also discussed developing relations with what one called “China Inc.” as part of a “new push on soft diplomacy for the Chinese.” These emails are completely unconnected to the Hunter Biden emails being released by the New York Post.

These and more explosive never-before-revealed emails were provided to Schweizer by Bevan Cooney, a one-time Hunter Biden and Devon Archer business associate. Cooney is currently in prison serving a sentence for his involvement in a 2016 bond fraud investment scheme.

In 2019, Cooney reached out to Schweizer after becoming familiar with the revelations in his 2018 book Secret Empires. Cooney explained that he believes he was the “fall guy” for the fraud scheme and that Archer and Hunter Biden had avoided responsibility.

Cooney, their associate who is currently serving a prison sentence on his conviction in the matter, later reestablished contact with Schweizer through investigative journalist Matthew Tyrmand. From prison, Cooney provided Schweizer with written authorization, his email account name, and password to his Gmail account to retrieve these emails. He authorized, in writing, the publication of these emails— notable because it is the first time a close associate has publicly confirmed Hunter’s trading on his father’s influence.

The emails offer a unique window into just how the Biden universe conducted business during the Obama-Biden Administration. These associates sought to trade on Hunter Biden’s relationship with, and access to, his father and the Obama-Biden White House in order to generate business.

For instance, on November 5, 2011, one of Archer’s business contacts forwarded him an email teasing an opportunity to gain “potentially outstanding new clients” by helping to arrange White House meetings for a group of Chinese executives and government officials. The group was the China Entrepreneur Club (CEC) and the delegation included Chinese billionaires, Chinese Communist Party loyalists, and at least one “respected diplomat” from Beijing. Despite its benign name, CEC has been called “a second foreign ministry” for the People’s Republic of China—a communist government that closely controls most businesses in its country. CEC was established in 2006 by a group of businessmen and Chinese government diplomats.

“I know it is political season and people are hesitant but a group like this does not come along every day,” an intermediary named Mohamed A. Khashoggi wrote on behalf of the CEC to an associate of Hunter Biden and Devon Archer. “A tour of the white house and a meeting with a member of the chief of staff’s office and John Kerry would be great,” Khashoggi said before including what should have been a major red flag: “Not sure if one has to be registered to do this.” Presumably, Khashoggi meant a registered lobbyist under the Foreign Agents Registration Act (FARA).

Khashoggi believed the trip presented “a soft diplomacy play that could be very effective” and would give Hunter Biden’s business partners “good access to [the Chinese] for any deal in the future.”

The gross income of the CEC members’ companies allegedly “totaled more than RMB 1.5 trillion, together accounting for roughly 4% of China’s GDP.” The overture to Hunter Biden’s associates described the Chinese CEC members variously as “industrial elites,” “highly influential,” and among “the most important private sector individuals in China today.”

Before contacting Hunter Biden’s associates, the CEC had been trying to get meetings with top Obama-Biden administration officials to no avail. “From the DC side as you will see below they [CEC] have written letters to several members of the administration and others and have so far not had a strong reaction.”

“This is China Inc,” wrote Khashoggi in the email, referring to the delegation of Chinese billionaires.

“Biggest priority for the CEC group is to see the White House, and have a senior US politician, or senior member of Obama’s administration, give them a tour… If your friend in DC can help, we would be extremely grateful,” Khashoggi emphasized.

The original Oct. 19, 2011, email from Khashoggi was sent to Gary Fears — a controversial political fundraiser with a checkered history who was caught up in a riverboat casino scandal in the mid-1990s — who forwarded it on to Archer a couple weeks later on Nov. 5, 2011.

Time was short, as Khashoggi’s original email noted that the Chinese delegation would be in DC on Nov. 14, 2011. Fears told Archer to “reach out” to Khashoggi about the request regarding getting the Chinese businesspersons and officials into the Obama White House, adding it would be “perfect for” Archer to also “attend” with them and then “get guys for the potash deal.”

The same day Fears sent Khashoggi’s message to him, Archer took the email from Fears and sent to Khashoggi a business proposal for a potash mine deal he had lined up.

Six days after the initial overture, Archer received a followup email asking how a meeting with CEC’s representative went. The email closed with “Do me a favor and ask Hunter [Biden] to call me — I’ve tried reaching him a couple of times.” Archer responded, “Hunter is traveling in the UAE for the week with royalty so probably next week before he will be back in pocket…. The meeting with [CEC representative] was good. Seems like there is a lot to do together down the line. Probably not a fit for the current Potash private placement but he’s a good strategic relationship as the mine develops. Definitely have a drink with Mohammed and let him know how impressed I was with his whole deal.” 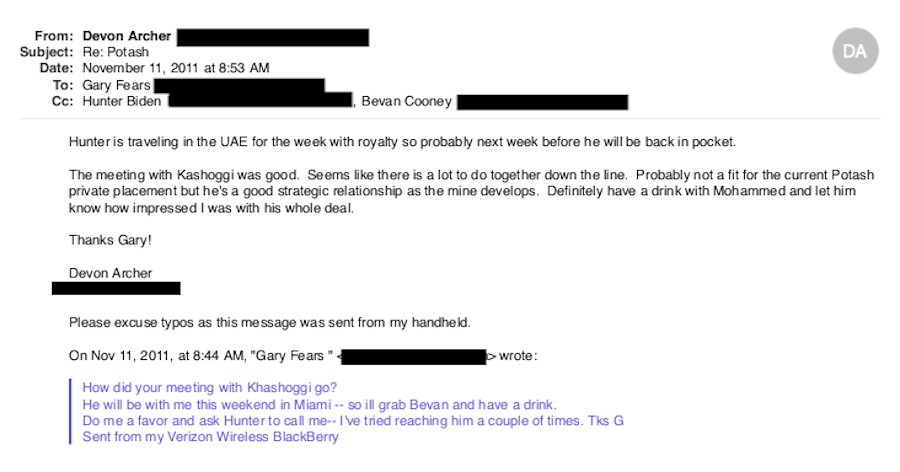 One minute later, Archer sent a follow-up email, “Couldn’t confirm this with Hunter on the line but we got him his meeting at the WH Monday for the Chinese folks.”

On the day of the meeting, November 14, 2011, Cooney emailed Fears to confirm that Archer “got the Chinese guys all taken care of in DC.”

The Obama-Biden Administration archives reveal that this Chinese delegation did indeed visit the White House on November 14, 2011, and enjoyed high-level access. The delegation included approximately thirty members, according to White House visitor logs. But those records also obscure perhaps the most important item for the Chinese delegation: a meeting with Vice President Joe Biden himself.

The visitor logs list Jeff Zients, the deputy director of Obama’s Office of Management and Budget (OMB), as the host of the CEC delegation. Obama had tasked Zients with restructuring and ultimately consolidating the various export-import agencies under the Commerce Department—an effort in which the Chinese delegation would have a keen interest.

Curiously, the Obama-Biden visitor logs do not mention any meeting with Vice President Joe Biden. But the Vice President’s off-the-books meeting was revealed by one of the core founders of the CEC. In an obscure document listing the CEC members’ biographies, CEC Secretary General Maggie Cheng alleges that she facilitated the CEC delegation meetings in Washington in 2011 and boasts of the Washington establishment figures that CEC met with. The first name she dropped was that of Vice President Joe Biden.

The relationships established during that visit may have benefited Hunter Biden and Devon Archer down the road. Two years later, they famously helped to form the Chinese government funded Bohai Harvest RST (BHR) investment fund. One of BHR’s first major portfolio investments was a ride-sharing company like Uber called Didi Dache—now called Didi Chuxing Technology Co. That company is closely connected to Liu Chuanzhi, the chairman of the China Entrepreneur Club (CEC) and the founder of Legend Holdings—the parent company of Lenovo, one of the world’s largest computer companies. Liu is a former Chinese Communist Party delegate and was a leader of the 2011 CEC delegation to the White House. His daughter was the President of Didi.

Liu has long been involved in CCP politics, including serving as a representative to the 9th, 10th, and 11th sessions of the National People’s Congress of the PRC and as a representative to the 16th and 17th National Congress of the Chinese Communist Party. Liu was the Vice Chairman of the 8th and 9th Executive Committee of All-China Federation of Industry and Commerce (ACFIC), an organization known to be affiliated with the Chinese United Front.

The Biden campaign has not responded to a request for comment on this story.