It’s been four days since the presidential election, and President Trump’s supporters are rallying like the campaign season never ended.

The results on November 3, where many assumed Trump was on his way to victory after winning Florida, were soon flipped on their head when swing state after swing state saw a slowdown in ballot counting. Some states are still not finished counting.

The Republican establishment and their donors, who have been careful not to embrace Trump and his “America First” agenda, began conceding the election to Democrat Joe Biden and Sen. Kamala Harris (D-CA).

“Ann and I extend our congratulations to President-elect Joe Biden and Vice President-elect Kamala Harris,” Sen. Mitt Romney (R-UT) wrote. “We know both of them as people of good will and admirable character. We pray that God may bless them in the days and years ahead.”

Others stayed quiet or sent out vague messages, like former United Nations Ambassador Nikki Haley who said the “American people deserve transparency and fairness as the votes are counted.”

Haley’s comment was posted about an hour after Donald Trump Jr. slammed “2024 GOP hopefuls” — with the exception of Florida Gov. Ron DeSantis and Sen. Josh Hawley (R-MO) — for what he called a “total lack of action” on their part to galvanize voters.

Former Florida Gov. Jeb Bush, like Romney, was much more upfront with his congratulatory statement to Biden, saying “now is the time to heal deep wounds.”

The United States Chamber of Commerce and the Business Roundtable, representing many of the establishment’s business donors, both conceded to Biden.

The statements did not seem to resonate with Trump’s coalition — an array of working and middle class Americans that has built on its roots of white working class communities to include disenfranchised Hispanics and young black men.

They spent November 7 rallying across nearly every state in the nation, calling out what they saw as election fraud, a weak-kneed Republican Party, and an unwillingness by GOP leaders to discuss the issues around which Trump coalesced his base.

“Where are our leaders?” a member of the crowd shouts. A woman at the rally says representatives and senators won their races on Trump’s coattails but are now laying low as his campaign challenges the establishment media’s election narrative.

The general consensus among Trump’s base: The election is not only not over, but Trump is only the beginning for them. They are just getting started and do not foresee a return to power for the party establishment. 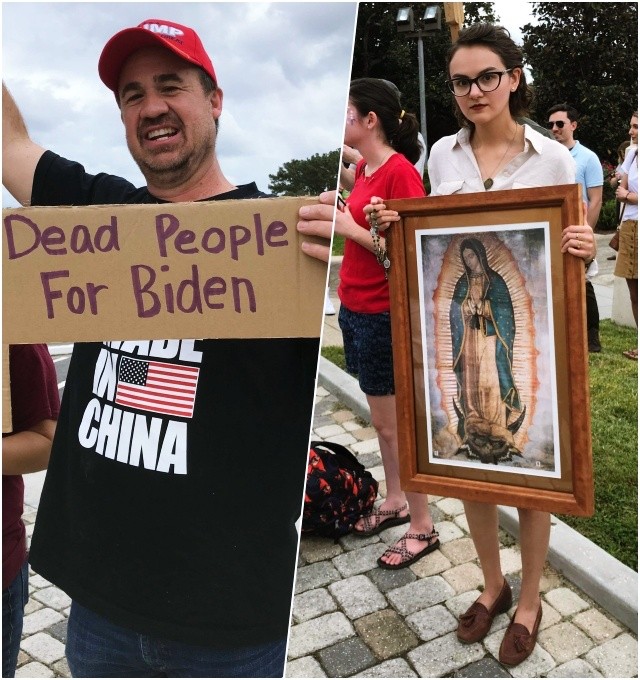 A man (L) holds a sign that reads “Dear people for Biden.” A woman (R) carries a framed Our Lady of Guadalupe picture as Trump supporters gathered to pray the rosary in Baton Rouge, Louisiana. (Photo via John Binder/Breitbart News)

“The Republican establishment’s surrendering is what led to Trump,” host of the Red Pilled America podcast Patrick Courrielche says. “If they think this approach will work, they’re going to get an even bigger monster than Trump.”

Courrielche, who attended the Beverly Hills, California, rally this past weekend, says the playbook of the establishment is typical. It begins, he says, by their attempts to take back the reigns of the Republican Party. In the past, these attempts led to unsuccessful outcomes, such as the 2012 re-election of President Obama.

This time around, though, there is a legion of more than 71.5 million voters who are more loyal to Trump and his economic nationalist agenda than to the Republican Party and the old guard that has not helped win a presidential election since 2004.

“The Republican establishment has rolled out the Romneys to the world as the McCain-like middle man to bridge the gap between the Right and Left,” Courrielche says. “Except no one sees Romney as anything other than being a traitor.”

In some grassroots circles, momentum against the establishment in four years is already building.

Online, protests to fight the media’s election call for Biden have garnered hundreds of thousands of supporters. A petition at WeWillNotGoBack.org, seeking to fend off a power grab by the establishment from the populist-nationalist movement, organically gathered over a thousand signatures in ten hours, according to Saurabh Sharma and Jake Mercier.

“If Nikki Haley gets on the ballot in 2024, the Republican Party will have lost me,” Courrielche says.