Loeffler and Perdue, this coming Tuesday, respectively face Democrats Rev. Raphael Warnock and Jon Ossoff in runoffs that will determine majority control of the upper congressional chamber. If both Democrats win, the U.S. Senate would deadlock at a 50-50 tie and Vice President-elect Kamala Harris would cut the ties, throwing control of the chamber to the Democrats.

Noem, a rising GOP star who’s resisted lockdowns and mandates in response to the coronavirus pandemic in her state of South Dakota, campaigned here at Jessie’s Restaurant speaking first for about 15 minutes, and then taking another nearly half hour of questions from conservatives gathered for her appearance. Noem also sat for an exclusive interview with Breitbart News, which will air on Breitbart News Saturday on SiriusXM 125 the Patriot Channel this weekend. 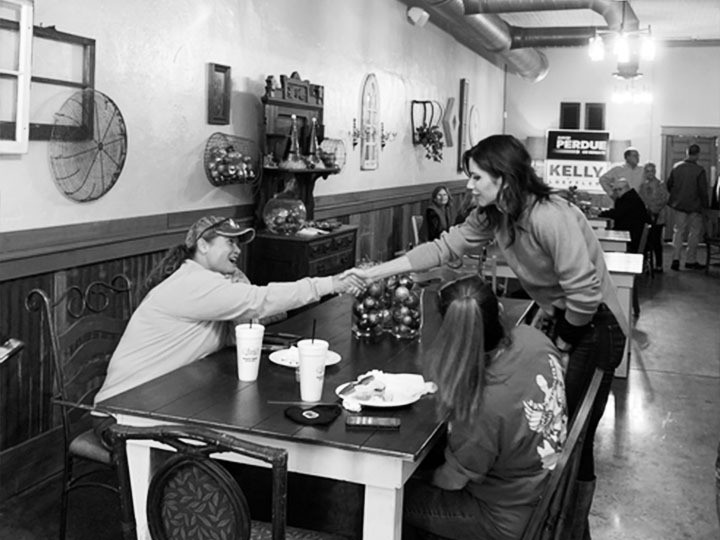 In her remarks, she put the consequences of a potential Democrat victory in starkly realistic terms, detailing how not just Georgians but everyone nationwide, including those in her state of South Dakota, would take a serious personal financial hit because of the leftist policies a Democrat-controlled Congress and President-elect Joe Biden would be able to force upon the public without checks and balances.

“If we let Ossoff and Warnock get into the United States Senate, people will have less money in their pockets, absolutely, and their paychecks will be smaller next year. In two years, we’ll be back to $4 or $5 a gallon gasoline,” Noem said. “Heating your home is going to increase by at least 30 to 40 percent. Ask moms and dads who are busy out there trying to pay their bills today if they can afford that. That’s just real life every day stuff. All their food is going to cost more at the grocery store because of their overregulation and their unwillingness to give us free and fair trading deals with other countries. There are real consequences to that outside of the whole freedom and Constitution argument we’ve been making all along. A lot of people today haven’t done their homework about what Marxism and socialism means. But they do care about: ‘Can I pay the rent next month?’ We need those real-life conversations.”

Warnock in particular has not answered whether he denounces socialism or Marxism, something Republicans like Noem argue are confirmation that he actually supports it. Noem cited that Loeffler, in her debate with Warnock, pressed the Democrat on that question.

“It was interesting to me to listen to them talk,” the South Dakota governor told the group here. “I thought Kelly did a fantastic job. What was interesting to me about that debate is several times she asked him to denounce Marxism and socialism and he refused. I think right there is the answer for this election and what’s going to happen on Tuesday.”

That’s what brought her back to Georgia again, making the long trek from South Dakota down to south Georgia for this event in Valdosta and another one earlier on Wednesday in Leesburg.

“People ask me all the time why I’m back here in Georgia today, and it’s because the consequences of what happens on Tuesday will impact the people of South Dakota,” Noem said. “It will impact all the people of this country. It really is a choice between sending two people, Kelly and David, who love this country and really want to preserve it for our kids and our grandkids and two extremists who want to change this country into something that will completely take away the American dream and the opportunity that we’ve always had. So that’s why I’m here, and I think if we’re going to have a real honest conversation–probably none of you knew who I was a year ago. Probably the reason why you even know my name today is because the liberals have been so busy kicking me in the head for all the decisions I’ve been making for my people in South Dakota because of COVID-19. So I think it’s important for you to understand why I made those decisions, and it’s good to understand just a little bit about me. I’m just a farmer and a rancher. I’ve run several different businesses, a hunting lodge, a restaurant, and an insurance agency. I ran for Congress and served there for eight years and then I decided to run for governor because I recognized governors are CEOs and governors make decisions every day that can impact family. So when I ran for governor it was on South Dakota being an example to the nation. I believed because we were small we could do things a lot of other states couldn’t do—that we could be a pilot project for a lot of conservative things and we could show the rest of the country that what we believe really does create opportunity in this country.”

As Democrats in governors’ mansions across the country—as well national Democrats in Washington—overstep their authority, Noem has taken a different path, setting up a contrast from GOP governors to projected plans from the incoming Biden administration.

“I learned throughout COVID-19 and did exactly what every other governor in this country did. I listened to the scientists and I listened to the health experts, but I also took it a step farther and listened to my general counsel and I consulted with constitutional lawyers,” Noem said. “I wanted to do what my job was and nothing more. I recognized that when leaders overstep their authority, especially in a time of crisis, that’s when you break this country. That’s what we’ve seen in so many states across this country. We’ve seen so many governors overstep their authority, and they are taking away our freedoms. That’s what this race is about. We have seen unprecedented attacks on our freedom of religion. They have told us we can’t go to church and even if you are going to church they told us you can’t sing. ‘Heaven forbid don’t sing, because you’re going to spread the virus.’ We’ve seen unprecedented attacks on our freedom of speech. My goodness, the media: if you aren’t saying the right thing they will silence you, social media will ban you, and they will filter you if what you say doesn’t agree with them. What I’ve seen this year in how the media will use fear to perpetuate their agenda is shocking to me. They have also been taking unprecedented attacks against our right to assemble. This is really the big consequences of what this election is about, because that’s not just stopping governors in these states. It’s happening in the United States Senate. It’s happening in Washington, DC, and if we don’t keep Kelly and David in those two U.S. Senate seats we are going to set up a situation where it will be a 50-50 vote in the U.S. Senate and the person who will break the tie vote on every single controversial piece of legislation will be Kamala Harris. She has been proven to be the most extreme liberal U.S. Senator in this country. Is that the person we want making the vote and decision on every single thing happening in this country going forward? It’s not.”

While clearly the focus of this event was on Noem backing Loeffler and Perdue, and beating up on Warnock and Ossoff, this—like many other top surrogates ranging from Vice President Mike Pence to Sen. Marco Rubio (R-FL) and others appearing in Georgia—had a distinct feel of a preview of a potential eventual presidential campaign down the road–perhaps in 2024. A woman in the restaurant even asked Noem when she plans to run for president and everyone, including the South Dakota governor, laughed. “That seems like a very miserable job,” Noem replied.

These Georgia races will determine a lot about the future of the country. With Biden coming into the White House, and his running mate Harris taking over as Vice President, the Democrats retained control of the U.S. House even though they have a slimmed down majority after Republicans made serious gains there. But the Senate is down to 50 guaranteed Republicans next year, and 48 guaranteed Democrats. That means if the Democrats take these seats, they will in effect take the majority in the Senate—something Noem warned Georgians would be disastrous for them and everyone nationwide.

“Washington, DC, is a train wreck, so I can’t even imagine Democrats have control of the House, the Senate, and the White House,” Noem said. “Listen, when I was in Congress, when I was in the House, I knew I served with socialists. They told me that in the hallways and in candid conversations—there was 50 to 60 of them that believed in socialist policy in all of the debates we had. They never would have said it publicly because if they did that, that was something that would have been baggage for them in the next election. It’s amazing to me how much that’s changed in two years, from being something they knew they couldn’t talk about to being proud of it and standing up and proclaiming it as the solution as to what really needs to be addressed in this country.”

“When I first got to Congress, I had served in our state legislature in South Dakota—I ran in 2010 because people had asked me to for two years and I ended up winning,” Noem said. “I ran against a ‘Blue Dog Democrat,’ one of the last few who were left, and she had a 70 percent approval rating and didn’t vote for anything difficult—didn’t vote for the stimulus package, didn’t vote for Obamacare, she had only voted for Pelosi as Speaker. When I won, I got to D.C. and I recognized why everything was so broken, and I recognized it was because I could not get a hearing on a bill unless the committee chairman decided to have a hearing. Now, in the South Dakota legislature, if I write a bill it gets filed and it automatically gets a hearing in the committee. That’s not true in Washington, DC. The only way a bill ever sees the light of day is if the committee chairman decides they want to hear it. There’s people in D.C. who have been filing bills on good policy for 20 years that they’ve never even had the chance to debate. Now, let’s say they do hear your bill and actually pass it, there’s no chance it will go to the floor for a vote. The only way it will ever get voted on on the floor is if the Leader decides they want to vote on it. You could pass that committee unanimously and have incredible support and the only way it’s ever going to get voted on on the floor is if the leader decides they want to put it on the floor for a vote. Then if it ever gets passed through the House or the Senate, there’s no guarantee the other body is going to even look at it. They completely ignore each other. In South Dakota, if you pass the committee, three days later it’s voted on on the House floor. If it passes the House, it has to be heard in the Senate in committee by a crossover day, and then if it passes there it goes to the floor. There’s no process like that in Washington, DC. Leadership controls everything, and it’s all on what they decide to do and what their agenda. Who controls the committees is incredibly important, and so if you have somebody in control of that committee who doesn’t care about whether we have family farms out here, that we have diversified farming practices, that’s a national security issue. They only care about getting more people on government programs so they can control them. That changes this country faster than anything else.”