Supporters of President Trump stormed into the United States Capitol building on Wednesday and headed to the Senate chambers, where one took to the dais and shouted: “Trump won that election!”

Photos captured by reporters show protesters entering the Senate chambers ahead of a vote where lawmakers were set to certify the 2020 presidential election for President-Elect Joe Biden.

BREAKING: Protesters are on the Senate floor now: pic.twitter.com/k4Q0ln8pZs

They’re in the chamber. One is up on the dais yelling “Trump won that election!” This is insane pic.twitter.com/p6CXhBDSFT

The intruders shouted taunts at Vice President Mike Pence and took photos of themselves flexing at the seat normally occupied by the Senate Majority Leader, according to journalists in the room. 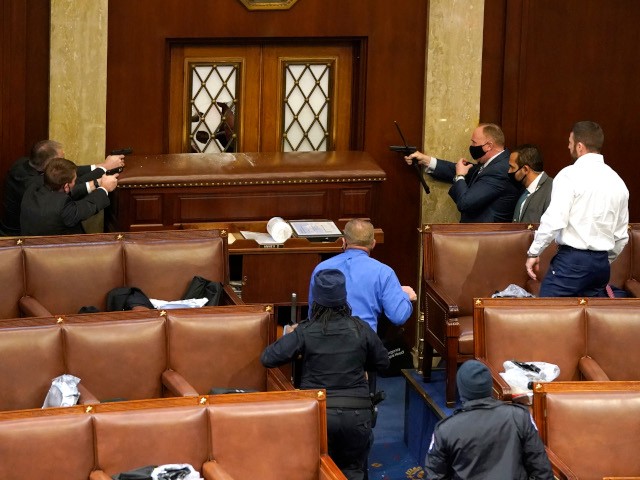 U.S. Capitol police officers point their guns at a door that was vandalized in the House Chamber during a joint session of Congress on January 06, 2021 in Washington, DC.  (Drew Angerer/Getty Images)

The protests came after the “Save America” rally in Washington, D.C. where Trump spoke to supporters and urged lawmakers to not certify the presidential election results.