There is no end of universal masking in sight in the United States as U.S. health officials continue to dodge the question of when face coverings will no longer be recommended and President Biden’s original plan for “just” 100 days of masking seemingly goes out the window, as his 100th day in office approaches this week.

On Tuesday, the Centers for Disease Control and Prevention (CDC) released updated guidance for fully vaccinated people. Despite various headlines from well-known establishment media outlets making it seem as though the agency gave its blessing for more maskless gatherings, that is not the case.

While the guidance outlines certain situations where fully vaccinated people can forgo a mask, such as visiting with unvaccinated members of a single household, the CDC still recommends masking when visiting members of more than one unvaccinated household and urges vaccinated people to continue to take precautions, such as wearing a “well-fitted mask” while in indoor public settings. Additionally, the guidance recommends vaccinated individuals continue to avoid large gatherings. It also does not fully free the vaccinated public from wearing masks outdoors, recommending them for “certain crowded settings and venues.”

Meanwhile, the CDC continues to recommend unvaccinated Americans abide by a number of rules, including masking in most settings, and there is no immediate end in sight.

Notably, it was just a few months ago, prior to his inauguration, that Biden unveiled his grand plan for what he framed as “just” 100 days of masking.

“My first 100 days is going to require — I’m going to ask for a masking plan. [I’m asking] everyone, for the first 100 days of my administration, to wear a mask,” Biden said in a December video.

“We’re going to require masks wherever possible, but this goes beyond government action. And so, as a new president, I’m going to speak directly to the American people and say what I’m saying now,” he said, asking the American people to jump on board with his plan and referring to wearing a mask as a “patriotic act.”

“Wear your mask for just 100 days. It’s the easiest thing you can do to reduce COIVD cases, hospitalizations, and death,” he said.

“Whatever your politics or point of view — mask up for 100 days,” he continued, saying it would take “100 days to make a difference.”

“It’s not a political statement; it’s a patriotic act,” Biden added, describing it as a “necessary and easy beginning, an easy start.”

Additionally, in an interview with CNN’s Jake Tapper, Biden, who was president-elect at the time, said it would be “just 100 days to mask, not forever. One hundred days. And I think we’ll see a significant reduction.”

But, as Breitbart News has consistently documented, red states without mask mandates, such as Florida and Texas, have consistently reported fewer new cases of the virus than blue states that have statewide mask mandates in place, such as New York, Pennsylvania, and Michigan.

Biden will reach the 100th-day milestone this week, and no official, including Biden himself, has predicted the end of masks. In fact, the president opted to wear a mask outdoors on Tuesday following the CDC’s updated guidance but essentially admitted it was for show, as Breitbart News reported:

Biden said he wanted Americans to see him without his mask when he returned to the White House.

When asked what message he was sending with his mask, Biden replied that “by watching me take it off and not put it back on until I get inside,” Americans could see a visible change in the guidelines.

Biden highlighted the new mask-wearing rules but stressed that all Americans — even vaccinated people — still needed to wear masks in crowded outdoor settings: “I want to be absolutely clear, if you’re in a crowd like a stadium or a conference — or a concert, you still need to wear a mask, even if you’re outside.”

“The bottom line is clear, if you’re vaccinated you can do more things more safely, both outdoors as well as indoors,” Biden said, his remarks coinciding with a CDC chart which lists the risk level of basic activities for vaccinated and unvaccinated people.

Per the chart, fully vaccinated people can “safely” participate in all of the basic activities listed, although the caption has a mask over the figure for all of the indoor activities, despite the vaccinated status. Meanwhile, the CDC lists attending a full-capacity worship service, eating in an indoor restaurant, and participating in an indoor exercise class as “least safe” activities for unvaccinated people, putting them in the chart’s red zone. 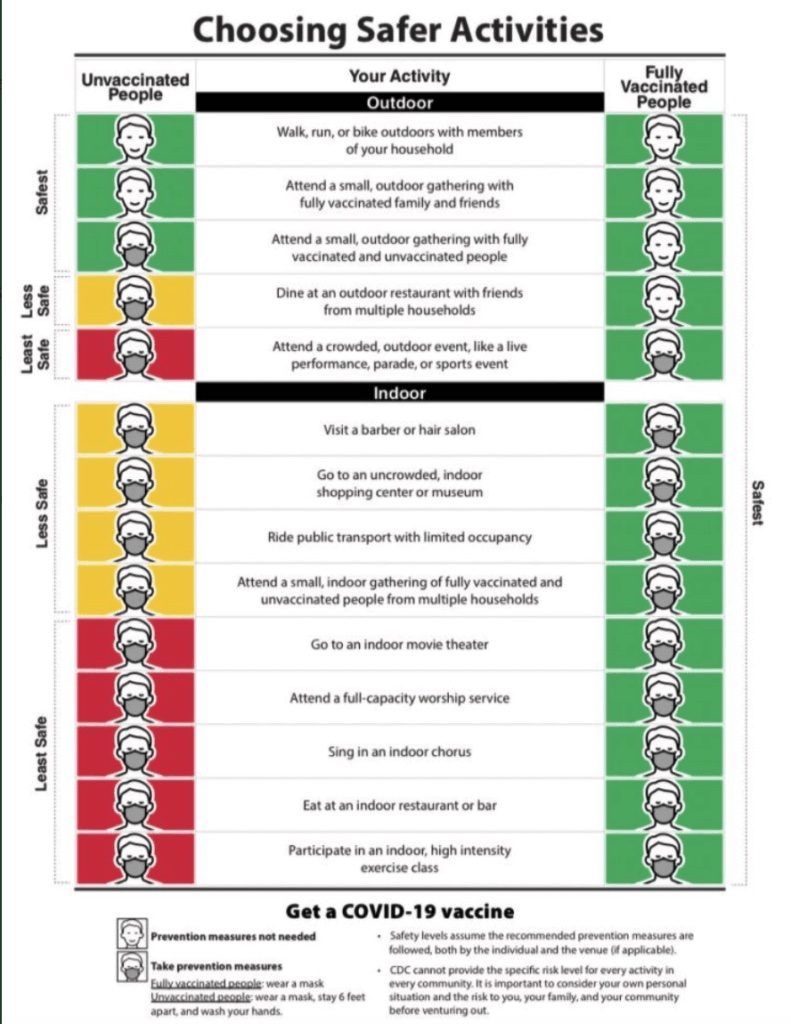 Public health officials have yet to say when Americans can stop wearing masks. CDC director Rochelle Walensky recently said it is “difficult” to say until a large enough percentage of the population is vaccinated, and Dr. Anthony Fauci said in February that Americans may still need to wear masks moving into 2022.