Los Angeles County Sheriff Alex Villanueva declared Monday that his department would clear out growing homeless encampments from Venice Beach by July 4 — to the delight of local residents and the horror of City Council member Mike Bonin.

(1/2) Today I visited the Venice Boardwalk again to view the failures of local politicians in regard to the homeless crisis.  Tomorrow the @LASDHQ Homeless Outreach Services Team (HOST) will be assessing Venice in order to triage the crisis and develop an action plan to… pic.twitter.com/GaOhxjbnux

Villanueva’s announcement was welcomed on social media by local residents, who have witnessed growing crime and chaos in the area — including an incident Monday when a woman with a knife was arrested as she attempted to disrupt an event by mayoral candidate Joe Buscaino, a Democrat who is currently president pro tempore of the City Council. 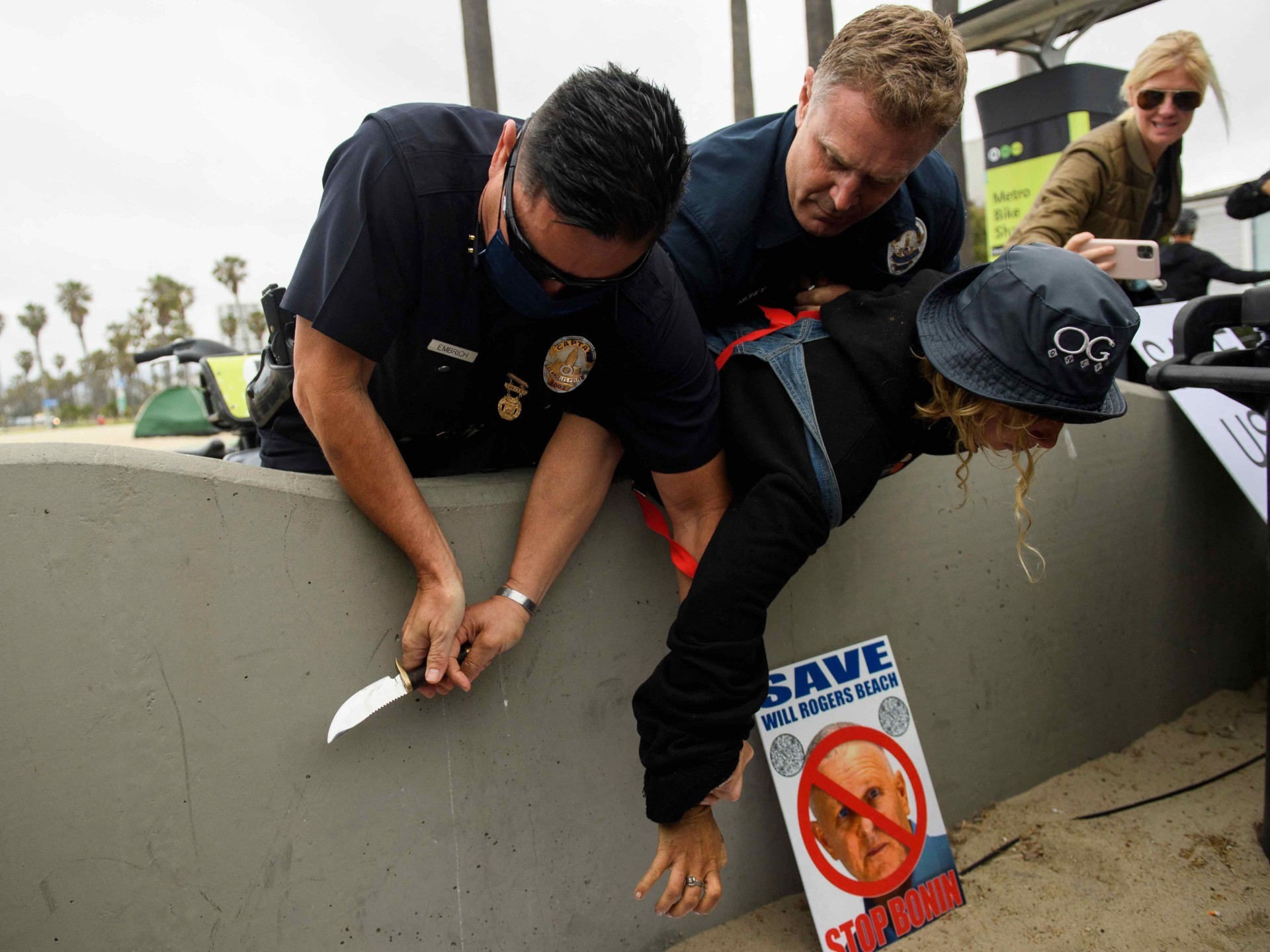 Los Angeles Police Department (LAPD) offices wrestle a knife away from a person experiencing homelessness as they were detained during an event with Los Angeles City Council Member and mayoral candidate Joe Buscaino announcing his “Plan For A Safer Los Angeles” at Venice Beach on June 7, 2021 in Los Angeles, California. – Mayoral candidate Joe Buscaino spoke about his “Plan For A Safer Los Angeles” to address the homelessness crisis in the city, as homeless encampments of unhoused people across the city remain a key issue for the city’s residents. (Photo by Patrick T. FALLON / AFP) (Photo by PATRICK T. FALLON/AFP via Getty Images)

In a break with jurisdictional tradition, L.A. County Sheriff Alex Villanueva announced his intention to clear the Venice Boardwalk of its unhoused population by July 4.

Villanueva said his department will work with the LAPD and use every pathway available to safely move individuals including Project Roomkey beds, City and County shelters, non-profit housing facilities and approved camping sites.

“We’re going to designate where people can pop up their tents, but it’s not going to be in the middle of a tourist destination destroying businesses,” said Villanueva. “This is not Venice. This is a horror show that’s been foisted on this community.”

Homeless outreach and enforcement in Venice is under the City of L.A.’s purview. However, neither CD-11 Councilman Mike Bonin nor Mayor Eric Garcetti have announced a plan to address the spiraling situation on the Boardwalk where tents now number over 200.

The state’s Project Roomkey has paid for hotel rooms for the homeless, but the homeless population appears to keep growing, and tent cities have spread throughout Los Angeles. Villanueva compared Venice Beach, which is part of the City of Los Angeles, to neighboring Santa Monica, which has a homeless problem but does not allow tent encampments.

He didn’t call to offer services or housing, which would help. He went on a PR blitz, promising his own notorious brand of justice.

To anyone familiar with Villanueva and LASD, that’s incredibly ominous.

Any involvement from Villanueva is troubling, especially for people concerned with civil rights.

Here’s some of what the Civilian Oversight Commission said about him and LASD:

*attempted to rehire deputies who were fired for cause, such as fabricating evidence and domestic violence.

*In defending the arrest of KPCCC’s @josie_huang, cited inaccurate and misleading info that was contradicted by contemporaneous video footage.

*bypassed the regular investigative process, ordered the destruction of the photos, blocked efforts to examine his handling of the leaked photos of the Kobe Bryant crash site

*attempted to intimidate and belittle individuals and entities tasked with providing oversight of the Sheriff’s Department.

*Violent deputy gangs continue to operate within the department

*Members of the gangs subvert the chain of command, promote violence, celebrate Nazi symbols and have cost the County millions of dollars to settle claims related to misconduct by alleged gang members.

*a recent report by the Loyola Center for Juvenile Law and Policy found that the number of deputy-involved shootings has increased particularly in the Sheriff’s Department’s substations where deputy gangs exist.

After @cerisecastle did an incredible 15-part expose of gang activity within the sheriff’s department, he denied such gangs even exist. https://t.co/IoO58GOlA8

The state of California has launched a civil rights investigation into his department over excessive force, retaliation, and misconduct: https://t.co/Y2LgChVSju (11/15)

In Venice, we’re working to marshall resources to offer housing and services to hundreds of people living on the streets. Villanueva hasn’t offered actual help.

This is a serious crisis. We need people interested in solving it, not exploiting it.

He is a roadblock progress. Last fall, when proponents of @reimagine_la were fighting for things needed to address homelessness – healthcare, jobs, housing. Villanueva led the opposition.

People who oppose solutions sure like to come to the Westside to make noise. (13/15)

VIllanueva is exploiting Venice to spread the nefarious lie, amplified by Tucker Carlson, John & Ken, and the LAPPL, that crime and homelessness are caused by progressives and that the only fix is tougher laws, longer sentences, and more prisons. (14/15)

They promise a broken response. To address this crisis, to save lives, and restore our public spaces, we need housing and services, not handcuffs and civil rights violations. (15./15)https://t.co/OKtli3Sbu8

Bonin faces a growing recall movement organized by residents angry with his plan to house more homeless at the beach.

Villanueva, a staunch opponent of efforts to “defund the police,” announced last week that violent crimes had risen dramatically in the county this year, including a 95% increase in homicides, as fewer police were on the beat.