An objective look at His Fraudulency Joe “McCarthy” Biden’s approach to the unvaccinated proves he has no desire to improve vaccination rates.

Biden’s summer vaccination crusade proved to be a spectacular failure, and now the White House and its corporate media allies have launched a second crusade: blame this failure on Fox News, Trump voters, and “misinformation” coming from the political right.

It's important to keep track of all of Joe Biden's lies and misinformation, since CorpMedia will never do it. https://t.co/BzNLaALAuZ

The goal is two-fold: 1) Scapegoat the right for the pandemic, and 2) use the McCarthyism Card to silence and blacklist the right on social media, etc.

What any fair-minded person sees here is not a sincere a desire to convince the unvaccinated to get vaccinated, but a president who — just like Adolph Hitler did with the Jews — is seizing on tragedy to exploit it, to scapegoat his political enemies, to blame them for all the problems in the world, in this case, a deadly pandemic. 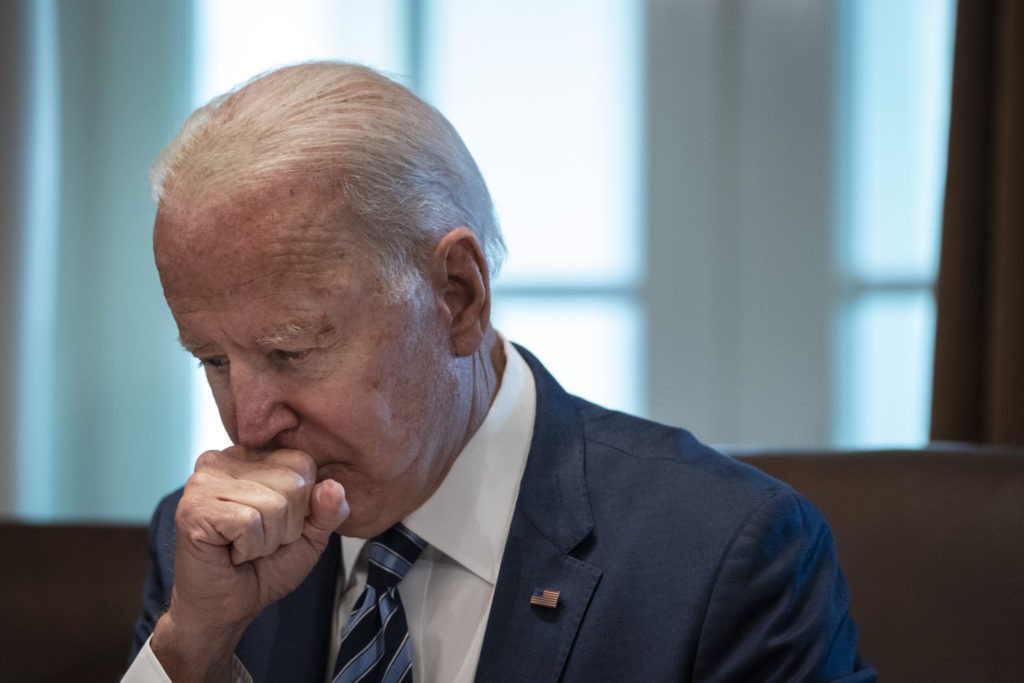 U.S. President Joe Biden pauses while speaking at the start of a Cabinet meeting in the Cabinet Room of the White House on July 20, 2021 in Washington, DC. Six months into his presidency, this is Biden’s second full Cabinet meeting. The White House said the meeting will focus on Covid-19, infrastructure, climate issues and cybersecurity. (Photo by Drew Angerer/Getty Images)

This is monstrous behavior, and if you are sincere about wanting to boost vaccination rates, a proven way to ensure it backfires. Antagonizing Americans never works, and  you’re not reaching the vast majority of the unvaccinated who are not Fox News-addicted, Qanon lunatics swayed by Facebook’s “fake news.”

Blaming your political enemies for low vaccination rates also helps if you – you Joe Biden – want the public to forget that you – you Joe Biden — are the one who spent months going full Qanon with a campaign to undermine confidence in the “Trump vaccine.”

There’s only one U.S. president who repeatedly warned people not to trust the coronavirus vaccine, and that was Joe “McCarthy” Biden.

Here’s another thought… Why is that fucking serial liar Dr. Anthony Fauci, an admitted and confessed fabulist who almost certainly lied to congress, still the administration’s face of the China Flu? Confidence in him among the unvaccinated, the very people you want to reach, sits at right around zero.

Biden's big coronavirus plan update: More than 170,000+ people in the U.S. have died from the coronavirus during President Joe Biden's first three months in office. https://t.co/uAXIduUqw8

Here’s an idea… Why not ask Donald Trump to do a PSA?

Why not pay the unvaccinated, say, $2500 to get vaccinated?

Why not run ads that point to how effective the vaccine’s been?

Why not put an end to vaccinated White House officials running around in masks?

Why not put an end to all federal mask mandates to show that vaccines are the road to normalcy?

So no, what Biden’s doing is not about convincing the unvaccinated to get vaccinated. It’s about a failed president willing to sink to Hitler-like depths to hold onto power.