At least 29 people were shot, seven of them fatally, Friday into Saturday night across Mayor Lori Lightfoot’s (D) Chicago.

NBC 5 reports the first shooting fatality occurred around 7:30 p.m. Friday “in the 7000 block of South Merrill.” The victim was walking by a sidewalk when someone shot him multiple times, killing him.

Hours later, at 1:15 a.m. Saturday, a man was standing on a sidewalk ” in the 1700 block of North Moody” when someone fired shots from a passing sedan. The man was shot in the head and fatally wounded.

The victim of drive-by shooting was discovered shortly after 5 a.m. Saturday “in the 0-100 block of East 79th Street.” The victim had been shot multiple times and was pronounced dead at the hospital. 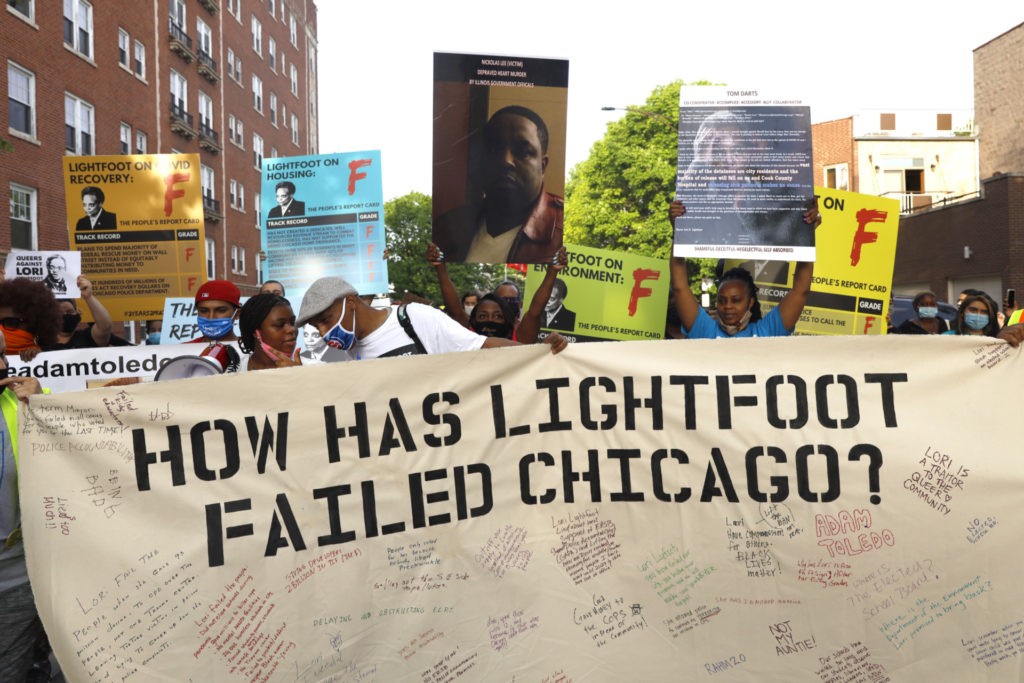 People gather to protest Chicago Mayor Lori Lightfoot’s policies as they march towards her home on the two-year anniversary of her inauguration, Thursday, May 20, 2021 in Chicago. (AP Photo/Shafkat Anowar)

A man was shot and killed at 1:49 p.m. Saturday while walking on the sidewalk “in the 5000 block of West Augusta.” Police suspect two gunmen were involved in the man’s death.

At 3:52 p.m. a 20-year-old man was shot and killed while sitting in a vehicle “in the 5800 block of South Western.” Another individual who was with the 20-year-old was shot as well, but did die.

ABC 7 / Chicago Sun-Times notes the seventh shooting fatality occurred about 8:15 p.m. Saturday, when a 31-year-old man was shot  “in the 500 block of East 79th Street.”  The 31-year-old was on the sidewalk when someone walked up, pulled a gun, and opened fire. He was taken to a hospital and pronounced dead.

Breibart News noted that 13 were shot Thursday alone in Mayor Lightfoot’s Chicago, and nearly 30 people were shot on Wednesday.