“It was just a little puzzling that they wanted to have that amount of time,” Paterson stated in an interview with WNYC’s the Brian Lehrer Show. “And what they’re going to do with that time, it’s suspicious — I’ll put it that way.”

“I think in the case of Lt. Gov. Hochul, she has been aware that this situation could occur since March — since the investigation began. So, I think as she was sort of hinting yesterday, she’s ready to take over right now,” he told Lehrer. “I just think the governor has just not resolved in his mind what’s actually going on yet, and his self-awareness just does not seem to be particularly helpful to him at this particular time.”

As Politico notes, “Paterson said he requested a five-day transition period in order to prepare for his own inauguration after Spitzer said he’d step down in wake of a prostitution scandal.”

Cuomo announced his resignation on Tuesday following a bombshell New York state attorney general report, which accused him of sexual harassment and misconduct against 11 women. The move likely puts an end to the New York state legislature’s impeachment investigation against the governor.

“I think people should keep a very close eye on him after everything he’s done. I think we’re all ready to move on, and I think the quicker we can move on, the better at this point,” the mayor said.

Cuomo, 63, denies that he touched anyone inappropriately and said his instinct was to fight back against the harassment claims. But he said it was best for him to step aside so the state’s leaders could “get back to governing.”

The 62-year-old Hochul, who gave her first news conference as governor in waiting on Wednesday, reiterated that she will not tolerate harassment in her administration. 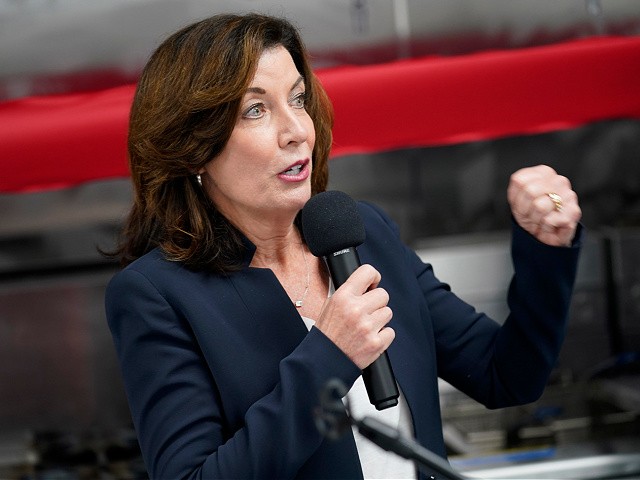 “I want to make sure that there’s a message that I’m tough,” Hochul said Thursday:

I’m not going to put up with anything that crosses the line or even comes close to the line because this should be an environment where all people, women, members of the LGBTQ community, anyone, is free of harassment that they can come to work, work for the people of New York state, focused and get the job done.