The American College of Pediatricians (ACPeds) is joining with other medical professionals in a lawsuit against the Biden administration’s mandate that doctors perform transgender procedures on any individual, including children–even if this violates a doctor’s medical judgment or religious beliefs.

Represented by Alliance Defending Freedom (ADF), a large legal organization committed to protecting First Amendment rights, ACPeds has joined with the Catholic Medical Association (CMA) and an OB-GYN with a specialty in treating adolescents to challenge the Biden Department of Health and Human Services’ (HHS) decision in May to interpret sexual discrimination in federal healthcare rules to include sexual orientation and gender identity:

Today, OCR announced it will interpret and enforce Section 1557’s prohibition on discrimination to include discrimination on the basis of sexual orientation and gender identity. Learn more: https://t.co/BCMx0Hte0r

The decision reversed that of former President Donald Trump’s administration to restore the biology-based, male-female definition of sexual discrimination in federal healthcare regulations.

The two medical associations that have filed the lawsuit represent more than 3,000 physicians and healthcare professionals: 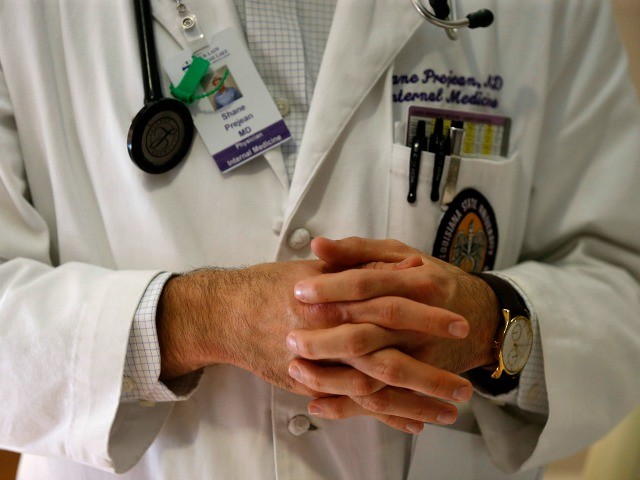 In a Friday, May 6, 2016 photo, Dr. Shane Prejean briefs a group of medical residents and medical students while visiting a patient at Our Lady of the Lake Regional Medical Center in Baton Rouge, La. Louisiana’s deep, persistent budget troubles are endangering the future of medical training programs. Proposed cuts to hospitals could damage the stream of new doctors for a generation, in a state that has chronic shortages of health care workers and some of the worst health care outcomes in the nation (AP Photo/Gerald Herbert).

To equate sex with gender identity as if children may be born in the wrong body sacrifices science and our children on the altar of political correctness. Sex is a medically significant innate and immutable binary trait that is determined by genes at fertilization. No drugs or surgeries can change a person’s sex, but so-called gender transition interventions do cause irreversible damage, especially to youth.

This case challenges whether the federal government can make medical doctors perform gender-transition surgeries, prescribe gender-transition drugs, and speak and write about patients according to gender identity, rather than biological reality—regardless of doctors’ medical judgment or conscientious objections.

Under the government’s overreaching interpretation, doctors now face an untenable choice: either act against their medical judgment and deeply held convictions by performing controversial and often medically dangerous gender-transition interventions, or succumb to huge financial penalties, lose participation in Medicaid and other federal funding, and, as a practical matter, lose the ability to practice medicine in virtually any setting.

“Under this new mandate, doctors can be punished with huge financial penalties, loss of federal funding, and even the removal of their ability to practice medicine in most settings,” ADF explained further about the significance of the case.

Essentially, the government is telling those in the medical profession that they need to ignore the scientific fact that there are two sexes—male and female. But the biological reality is that women’s and men’s bodies are not the same. They react differently to different medications. They are at greater risks for different types of cancer. And, of course, only women are capable of being pregnant. Ignoring these facts creates inaccurate, dangerous, and potentially lethal situations for patients of all ages in health care.

“But this doesn’t just threaten doctors,” ADF asserted. “It threatens their patients as well—children, in particular.”

Dr. Quentin L. Van Meter, president of ACPeds and a pediatric endocrinologist, warned of the potential harms of gender transition drugs: “Puberty blockers and cross-sex hormones combined will sterilize many youth and cause them to develop serious chronic illnesses such as diabetes, heart disease, stroke and cancers that they otherwise would have never experience”: 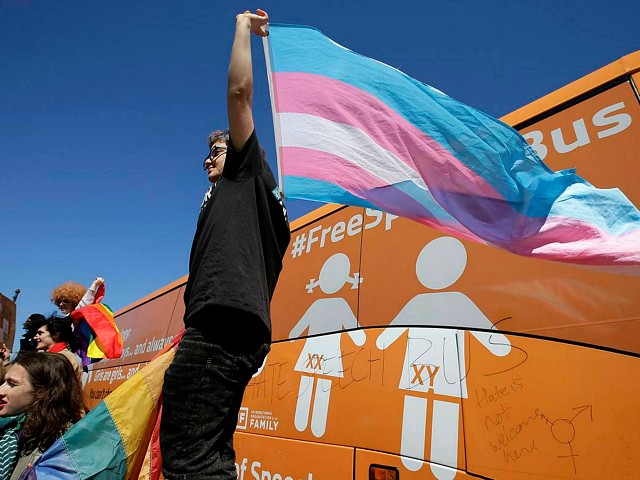 Leon Weiler, of Cambridge, Mass., top, holds a flag while standing with other protesters in support of transgender rights beside the “Free Speech Bus,” painted with the words “boys are boys” and “girls are girls,” in the Harvard Square neighborhood of Cambridge, Thursday, March 30, 2017. A spokesman for the group behind the bus said organizers are pushing back against greater acceptance of transgender people (AP Photo/Steven Senne).

Van Meter stressed as well that the international standard of care for youth who present with gender dysphoria is psychotherapeutic intervention to assist with the identification and treatment of the underlying causative factors.

Biden’s Health and Human Services department is grossly overreaching its authority and, in so doing, putting children’s psychological and physical health in great peril. Our clients are rightfully objecting on medical, ethical, religious, and conscientious grounds to a one-size-fits-all government mandate to provide gender-transition procedures.

ADF senior counsel Julie Marie Blake added that the Biden administration’s actions and threats to physicians who do not comply with its mandate is “an extreme violation of doctors’ constitutional rights and certainly not in the best interest of the patients they serve.”

The mission of our Department is to enhance the health and well-being of all Americans, no matter their gender identity or sexual orientation. All people need access to healthcare services to fix a broken bone, protect their heart health, and screen for cancer risk. No one should be discriminated against when seeking medical services because of who they are.

Make no mistake: the policy announced by HHS today is not about “fix[ing] a broken bone’ or ‘screen[ing] for cancer risk.” No American was being denied access to these treatments for identifying as “LGBTQ.” Rather, this policy is really about forcing hospitals and medical professionals to adhere to leftist ideology regarding sexuality and gender—and in particular to provide sex-change procedures to all comers, including children.

"All people need access to healthcare services to fix a broken bone, protect their heart health, and screen for cancer risk." True. Has any trans-identified person been denied Covid treatment? Or is this about mandating sex reassignment procedures… https://t.co/qzSSypDIZK

The policy “would force doctors who can perform sex transition surgery to do so, regardless of their religious objections,” he said, and “will also be contested in the federal courts.”

“Catholic hospitals do not deny routine health care to transgender persons,” Donohue added. “There is a difference between denying transgender persons treatment for COVID and forcing a Catholic doctor to make anatomical changes on the sexually confused.”