President Joe Biden never visited the Tree of Life synagogue after the horrific massacre in 2018 that killed 11 Jewish Americans, according to the White House.

On Thursday, during a virtual address ahead of the Jewish holidays Rosh Hashanah and Yom Kippur, Biden claimed he visited the Tree of Life synagogue following the shooting in 2018, when a lone gunman committed what is now considered the worst attack against American Jews in United States history.

The president’s claims of visiting the synagogue were immediately refuted by Tree of Life Executive Director Barb Feige, who said it never happened. 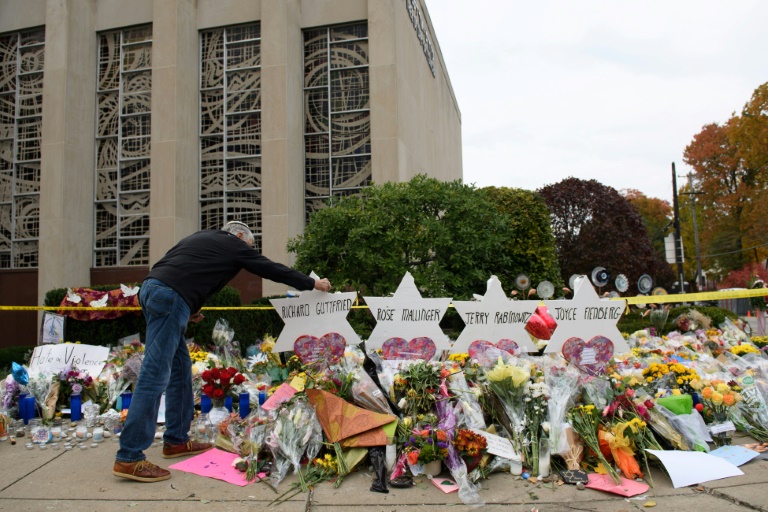 Mourners visit the memorial outside the Tree of Life Synagogue in Pittsburgh, Pennsylvania, where 11 people were killed in a mass shooting on October 27

On Friday, the White House confirmed to the New York Post that the president never visited the synagogue and was instead referring “to a call he had with the Tree of Life rabbi in 2019,” which contradicts the fact that Biden explicitly said that he remembers “spending time at” the Tree of Life synagogue. Nonetheless, Tree of Life Rabbi Hazzan Jeffrey Myers told the Post that Biden did call him one year after the massacre.

President Biden kindly called me on my cell phone as I was sitting in Dulles Airport awaiting a return flight to Pittsburgh after I testified before Congress in July 2019.

Following the attack, then-President Donald Trump visited the site to pay his respects and personally met with the synagogue’s rabbi, Jeffrey Myers, who said the president exhibited a ‘warm and personal side’ unseen by the public.