President Joe Biden hopes to stuff the government funding bill with leftist “anomalies” as lawmakers continue to negotiate a way to keep the government running.

Punchbowl News reported Monday that the Biden White House continues to prepare a list of “anomalies” that they will want funded as part of any continuing resolution (CR) that a CR does not usually fund. The White House will send the list of their priorities to the House and Senate Appropriations Committees likely sometime this week.

The federal government will run out of money on September 30, which will lead to brinkmanship-style negotiations between the Biden White House and congressional Republicans. Biden and Democrat congressional leaders hope to attach a debt ceiling increase, which also must pass, to the government funding bill.

Senate Minority Leader Mitch McConnell (R-KY) has vowed to oppose the inclusion of a debt ceiling increase with the government funding bill.

Democrats and Republicans have included many carveouts in high-priority legislation. 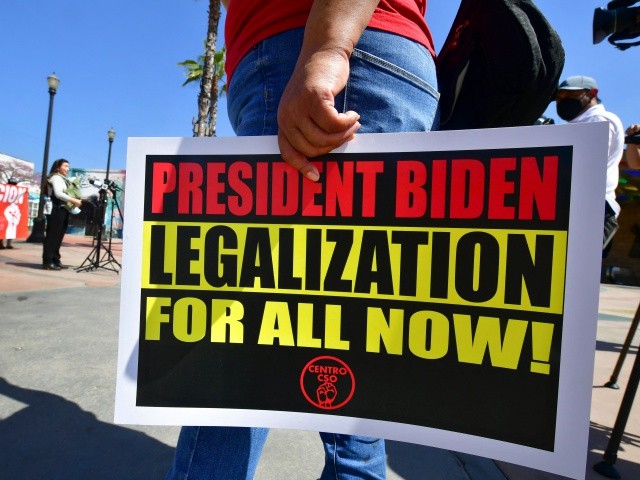 Immigrant families and their supporters attend a rally at Mariachi Plaza in Los Angeles, California on April 8, 2021, demanding President Joe Biden move forward with his plan to grant legal status to the more than 10 million undocumented immigrants as well as calling for the release of children being held by US Immigration and Customs Enforcement. – Apprehensions of undocumented migrants on the US border with Mexico soared 70 percent in March to 172,331, hitting the highest level in 15 years, data showed Thursday, in a mounting challenge for the administration of President Joe Biden (Photo by Frederic J. BROWN / AFP) (Photo by FREDERIC J. BROWN/AFP via Getty Images).

The $1.2 trillion infrastructure bill, which 19 Senate Republicans voted for, also contains many leftist carveouts. This includes:

The bipartisan infrastructure proposal floating around the Senate is essentially a Green New Deal Lite.

Check out the latest #RSC memo from Chairman @RepJimBanks explaining the top 10 reasons to vote no: pic.twitter.com/BgdtCI2Pp0

Senate conservatives, such as Sen. Josh Hawley (R-MO), called out the infrastructure bill for containing many “woke issues.”

“Now gender identity is infrastructure. Can’t wait to see what else is in this bill,” Hawley wrote.