LOS ANGELES (AP) — In a blitz of TV ads and a last-minute rally, California Democratic Gov. Gavin Newsom urged voters Sunday to turn back a looming recall vote that could remove him from office, while leading Republican Larry Elder broadly criticized the media for what he described as double standards that insulated Newsom from criticism and scrutiny throughout the contest.

The sunny, late-summer weekend was a swirl of political activity, as candidates held rallies, continued bus tours and cluttered the TV airwaves with advertising offering their closing arguments in advance of the election that concludes Tuesday.

Newsom — who is expecting President Joe Biden on Monday for a capstone get-out-the-vote rally in Long Beach — was in a largely Hispanic area on the northern edge of Los Angeles, where he sought to drive up turnout with the key voting bloc.

Elder also was in Los Angeles, where he was joined by activist and former actress Rose McGowan, who repeated her claims from recent days that Newsom’s wife, Jennifer Siebel Newsom, attempted to persuade her in 2017 not to go public with her allegations of sexual misconduct against Hollywood producer Harvey Weinstein.

Siebel Newsom’s office described the allegations as a “complete fabrication.” In a brief interview with The Associated Press, Newsom characterized McGowan’s claims as a “last-minute classic hit piece” from one of Elder’s supporters.

The governor called Elder desperate and grasping, saying McGowan’s claims about his wife “just shows you how low things go in campaigns these days.” 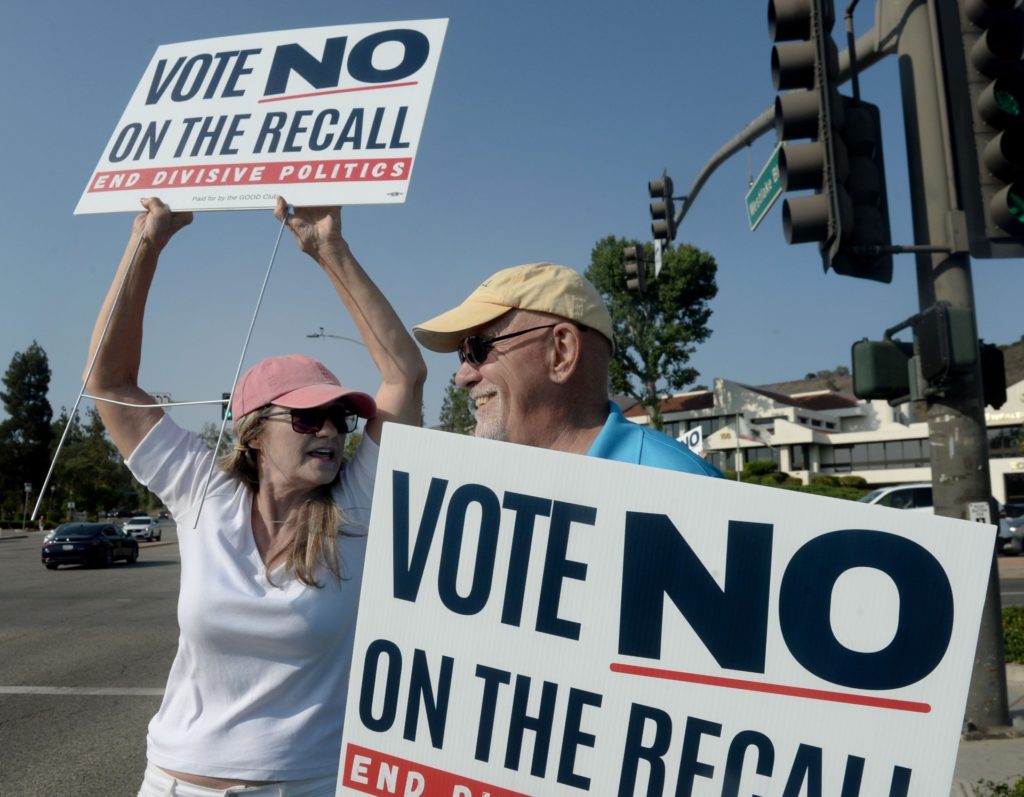 Kerry Mellin, left, and Bruce Fleck stand at the corner of Thousand Oaks and Westlake boulevards to oppose the recall of Gov. Gavin Newsom on Aug 13. (JUAN CARLO/THE STAR via Imagn Content Services)

During her appearance, McGowan spoke warmly of Elder and lambasted Hollywood Democrats who she said traumatized her life. She now lives in Mexico.

The last-minute exchange highlighted growing tensions in the election, which largely grew out frustration with Newsom’s pandemic orders that shuttered schools and businesses during the pandemic. Voting concludes Tuesday. Recent polling shows Newsom is likely to hold his job.

McGowan, 48, who is known for her role in the “Scream” movie franchise, was one of the earliest of dozens of women to accuse Hollywood producer Harvey Weinstein of sexual misconduct, making her a major figure in the #MeToo movement.

Elder, who could become the state’s first Black governor, targeted some of his sharpest remarks at what he described as skewed media coverage.

Earlier this week, his walking tour of homeless encampments in LA’s Venice Beach neighborhood was cut short after a woman bicyclist wearing a gorilla mask threw an egg toward Elder and then took a swing at a member of his entourage. The confrontation set off strong reactions on Twitter, with conservatives charging the incident wasn’t immediately branded a racist attack because Elder is a conservative. 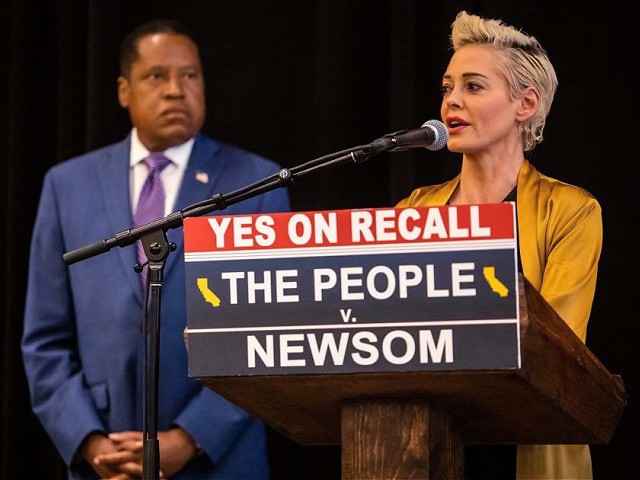 If he was a Democrat “it would have been a major story,” Elder said. He also said McGowan’s accusations largely have been ignored by the media, but argued that if similar charges had been made about him “that’s all you guys would be talking about.”

Emails posted on Twitter by McGowan showed she had contact with Newsom’s wife, which her office confirmed but said their communication was “as fellow survivors of sexual assault and in Jennifer’s former capacity leading the Representation Project, an organization that fights limiting gender stereotypes and norms.”

One of McGowan’s key claims is that during a 2017 phone conversation, Newsom’s wife referenced a law firm that was working with Weinstein and asked her what the firm could do “to make you happy.”

McGowan said Sunday she didn’t recognize the firm’s name at the time. “I had no idea who that was. So, I just said nothing and hung up on her. That was my last contact with her,” she said.

The election will determine whether Newsom can complete his first term or will be tossed out of office more than a year early. Voters are being asked two questions: Should Newsom be recalled and, if so, who should replace him? If he gets a majority vote on the first question, the second question with the names of 46 replacement candidate is irrelevant. Otherwise, the highest vote-getter among the replacement candidates would become governor.