United Airlines reluctantly agreed to postpone its company-wide Chinese coronavirus vaccine mandate Friday until a federal judge is able to hold further hearings in a case brought by six of the airline’s employees.

Evidently fearing it could lose Friday’s court battle and be slapped with a temporary restraining order (TRO), the airline pivoted 180 degrees and agreed to postpone its mandate until October 15. United Airlines originally told its 67,000 U.S. employees they must be vaccinated against Chinese coronavirus (or secure an exemption) by September 27 or face termination. Instead, unvaccinated employees will now be able to continue working normally while the plaintiffs and the company gather what they need to proceed in court. 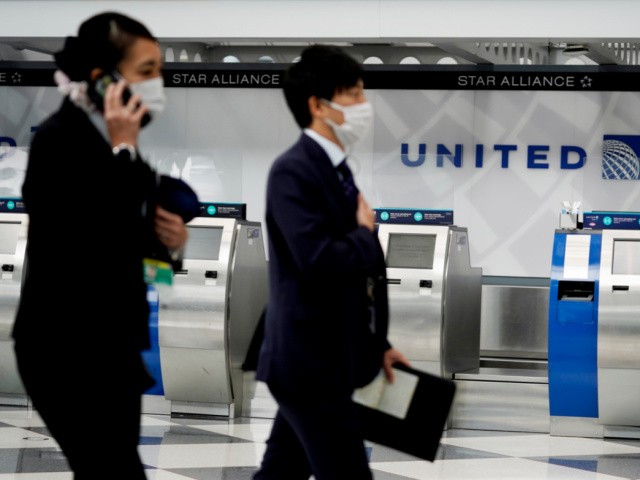 Mark Paoletta, a partner at Schaerr Jaffe representing the plaintiff said in a statement:

We are pleased that under a threat of a Temporary Restraining Order, United Airlines postponed its heartless and unlawful vaccine mandate that would impose on approximately 2,000 employees the unconscionable choice of violating their religious faith, violating their doctors’ orders, or essentially losing their job.

Six United Airlines employees are suing the company for its “draconian” Chinese coronavirus vaccine mandate, alleging the company has violated Title VII of the Civil Rights Act of 1964 and the Americans with Disabilities Act (ADA) by discriminating against them based on their religious and medical exemptions.

The class action lawsuit, which powerhouse Washington, DC, law firm Schaerr Jaffe filed in the United States District Court for the Northern District of Texas on Tuesday, represents potentially at least 2,000 United Airlines employees. These workers have obtained religious or medical exemptions and will maintain employment, but they will be forced to live without pay and health benefits for up to six years while the company assesses the pandemic, according to the complaint.

“United’s actions have left Plaintiffs with the impossible choice of either taking the COVID-19 vaccine, at the expense of their religious beliefs and their health, or losing their livelihoods,” the complaint states. “In doing so, United has violated Title VII and the ADA by failing to engage in the interactive process and provide reasonable accommodations, and also by retaliating against employees who engaged in protected activity.”

One of the plaintiffs, Kimberly Hamilton, has been with the company for 18 years and works as a station operations representative. She is the primary earner in her family and pays for her husband’s cancer treatment, which she will be “unable to afford if she is placed on unpaid leave,” court documents show.

Another plaintiff, Seth Turnbough, has worked for the company for 16 years and is a pilot. He has relapsing/remitting multiple sclerosis (MS) and his neurologist recommended he forego the coronavirus vaccine “due to a concern that it might trigger a “cytokine storm”—a condition in which an individual’s immune system is over-stimulated and begins attacking healthy tissue and organs,” the complaint states. His doctor is also concerned about his risk of blood-clotting, “which is already an elevated concern for all pilots.”

His exemption was approved, but he also stands to be placed on unpaid leave. He could lose his health benefits and his ability to retire in good standing, court documents allege.

Plaintiff David Castillo has worked for the company for 22 years and is an aircraft technician. He submitted a request for religious exemption on September 17, several days after the August 31 deadline. He was subsequently denied, the airline citing his request as “untimely.”

Castillo went to his supervisor directly to ask for a medical exemption, which is still pending. Castillo said he will be unable to afford his housing or his car if he is placed on unpaid leave.

“Unable to renew his lease without employment, he will become homeless on October 1, 2021,” the complaint states.

He also reportedly has diabetes and will no longer be able to afford proper medical care.

“United’s hostility to their own employees exercising their civil rights is stunning. United’s CEO Scott Kirby previously disparaged those who might seek a religious accommodation and warned that those employees were putting their jobs on the line,” Paoletta continued. “Fortunately, for those seeking an accommodation, United’s mandate has for now been stopped dead in its tracks.”

In a statement to Fox Business this week, a United Airlines spokesperson said the company believes the complaint is “without merit” considering the reportedly “small” number of employees impacted by the mandate:

The most effective thing we can do as an airline to protect the health and safety of all our employees is to require the vaccine – excluding the small number of people who have sought an exemption, more than 97% of our U.S. employees are vaccinated. And we’ve been encouraged by the overwhelmingly positive response from employees across all work groups, since we announced the policy last month. We’re reviewing this complaint in greater detail but at this point, we think it’s without merit.

Given the urgent and potentially life-threatening situations several of the plaintiffs are facing, on Tuesday, Schaerr Jaffe asked the court for a temporary restraining order (TRO) to be placed on the company’s mandate. A TRO means United Airlines would have to maintain the “status quo” — employees would show up to work and receive compensation — pending completion of the Equal Employment Opportunity Commission’s (EEOC) administrative process. Instead of a TRO, United Airlines agreed to extend its mandate during litigation.

Now everyone can follow the court’s decision to take the time and care needed to carefully consider the legitimate claims our clients have as we seek a solution that allows United to take necessary steps to combat COVID-19 while respecting the civil rights of valuable employees who have sincere religious objections or medical conditions that make them unable to take the vaccine.

Airline Employees 4 Health Freedom is an organization of airline workers, including the more than 2,000 United employees affected by the company’s vaccine mandate, working to defend members’ religious liberties and medical freedoms. The group reiterated its support for the lawsuit in a statement on Friday:

We stand strong with the Plaintiffs and all employees affected by United’s unconscionable treatment of those bravely exercising their religious and medical rights to request an accommodation to the vaccine mandate. The thousands of EEOC claims we have seen thus far are hardly “without merit,” and we look forward to the facts regarding an anything but reasonable accommodation process coming to light.

United Airlines is reportedly the first airline to mandate vaccines for its employees. The case, which is to be heard by former President Donald Trump appointee Judge Mark Pittman, could arguably create a domino effect if successful and lead to other vaccine mandate cases across the country.