Gov. Laura Kelly (D) issued a response after months-long calls from Republicans to send support from Kansas to the southern border, saying last week for the first time that about 250 Kansas National Guard troops had been stationed at the border since last October.

Kelly’s comment about the National Guard came after Kansas Attorney General Derek Schmidt (R) on September 21 called on Kelly to respond “urgently and favorably” to a request from the Texas and Arizona governors for emergency law enforcement assistance amid an ongoing crisis at the U.S.-Mexico border.

“We encourage you to invoke the Compact to send law enforcement assistance to our border-state neighbors without further delay,” the letter stated. 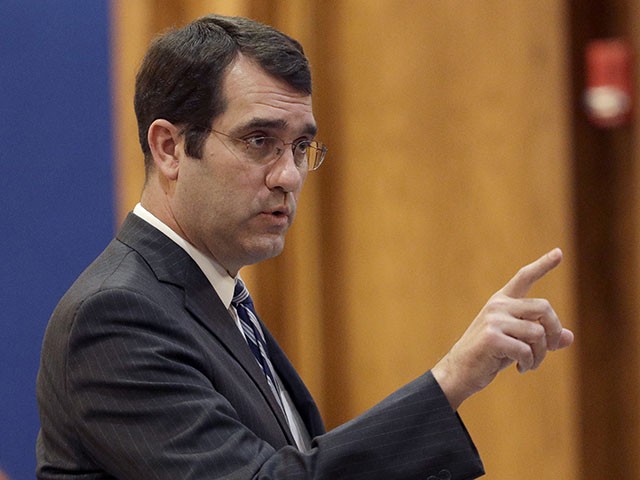 Kansas Attorney General Derek Schmidt makes his case in a court of appeals on May 9, 2019, in Topeka, Kansas. (AP Photo/Charlie Riedel)

On June 10, Texas Gov. Greg Abbott (R) and Arizona Gov. Doug Ducey (R) sent a letter to their fellow governors asking that they use the Emergency Management Assistance Compact to “send all available law-enforcement resources to the border in defense of our sovereignty and territorial integrity.”

On June 29, Kansas Rep. Ron Estes (R) joined two of his Republican colleagues in reiterating the governors’ call and asked Kelly to approve Abbott and Ducey’s request. The state lawmakers cited multiple crimes illegal aliens have allegedly committed in Kansas involving violence and drugs, as well as nationwide negative impacts of illegal migration such as fentanyl being smuggled into the U.S. and coronavirus requirements for U.S. citizens not being applied to those illegally arriving at the border.

Kelly at the time dismissed the state Republicans’ letter as “political games,” according to an Associated Press report.

Republicans continued to press Kelly, however, with the Republican Governors Association (RGA) on July 28 pointing to a local media report in Kansas about a spike in drug overdoses driven by fentanyl.

“Laura Kelly’s silence makes her complicit in the failures of Joe Biden and the federal government to get the southern border under control,” RGA spokesperson Joanna Rodriguez said at the time. “Kansans deserve a governor who will hold the President and the federal government accountable as record levels of drugs like fentanyl pour over the border and kill Americans.”

Kelly did not appear to address border concerns until Schmidt’s letter last week, when a spokesperson for her office said, according to local outlet KSNT:

The state of Kansas has had nearly 250 Kansas National Guard Soldiers deployed to the border since October 2020 supporting Customs and Border Protection. Both Republicans and Democrats in Washington have failed to address the problems within our immigration system for decades. We need true reform in a way that protects the border and allows us to continue to grow our economy here in Kansas, not publicity stunts that use our service members as political props.

Prior to last week, Kelly had made no mention of the 250 troops — out of about 5,200 total Army National Guard soldiers authorized to serve for the state. The troops had been deployed under orders of the Trump administration last October for a year-long mission to aid U.S. Customs and Border Protection (CBP) in the southwest border region, an operation separate from the request  in June from Abbott and Ducey.

The Kansas City Star observed Kelly’s silence about the troops as well, noting that she was uniquely quiet about the border deployment. “While the deployment to the border wasn’t publicized by the Kelly administration, the governor’s office has announced deployments this year to Louisiana for hurricane response and within Kansas in response to the COVID-19 pandemic.” The outlet added that Kelly also authorized deployment of national guardsmen to D.C. following the January 6 riot at the U.S. Capitol.

Kelly has not stated if she intends to send any manpower to aid the southern border states when the Kansas National Guard troops conclude their mission in October, and her office did not respond to Breitbart News’s request for comment on the matter.