Sen. Tom Cotton (R-AR) on Tuesday asked Gen. Mark Milley why he had not resigned over the deadly evacuation from Afghanistan.

“Why haven’t you resigned?” Cotton asked Milley, citing Milley’s comments that President Joe Biden did not consult the general until August 25 about moving the evacuation deadline past the Taliban-enforced deadline of August 31.

“General Milley, I can only conclude that your advice about staying in Afghanistan was rejected,” Cotton said. “I’m shocked to learn that your advice wasn’t sought until August 25th on staying past the August 31 deadline.”

“I understand that you’re the principal military adviser, but you don’t decide, the president decides, but if all this is true, General Milley, why haven’t you resigned?” Cotton asked. 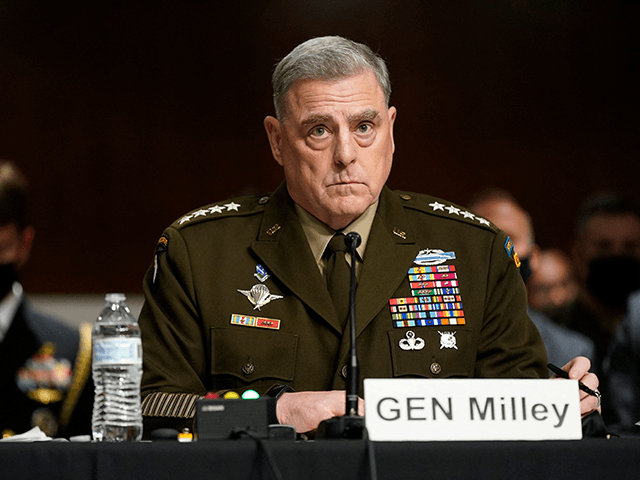 Chairman of the Joint Chiefs of Staff Gen. Mark Milley attends a Senate Armed Services Committee hearing on the conclusion of military operations in Afghanistan and plans for future counterterrorism operations in the Dirksen Senate Office Building on Capitol Hill in Washington, DC on September 28, 2021. (Photo by PATRICK SEMANSKY/POOL/AFP via Getty Images)

“Senator, as a senior military officer,” Milley began, “resigning is a really serious thing. It’s a political act if I’m resigning in protest.”

“I’m not going to resign,” Milley declared. “If the orders were illegal, that’s different. But if they’re legal from a civilian authority, I intend to carry them out.”

Afghan people climb atop a plane as they wait at the Kabul airport in Kabul on August 16, 2021, after a stunningly swift end to Afghanistan’s 20-year war, as thousands of people mobbed the city’s airport trying to flee the group’s feared hardline brand of Islamist rule. (Photo by WAKIL KOHSAR/AFP via Getty Images)

“It would be an incredible act of political defiance for a commissioned officer to just resign because my advice is not taken. This country doesn’t want generals figuring out what orders we are going to accept and do or not. That’s not our job,” Milley added.

The deadly withdrawal from Afghanistan reportedly left thousands of U.S. lawful permanent residents stranded behind enemy lines, billions of dollars worth of equipment abandoned to the Taliban, and 13 U.S. troops killed by a suicide bomb. During the chaotic evacuation, a U.S. drone strike killed seven Afghan children in what the U.S. government characterized as a mistake.