Youngkin, who is facing former Gov. Terry McAuliffe (D) in the November 2 election, said he had just received the endorsement Saturday morning.

“I am so honored and humbled, and it just reflects the fact that there is broad-based support for a platform that’s going to bring down our cost of living and cut taxes so people can keep more of their paycheck,” Youngkin said.

The endorsement comes as a blow to McAuliffe’s campaign after the HRBC previously backed McAuliffe in his 2013 bid for governor, as well as Gov. Ralph Northam (D) in his 2017 campaign.

While McAuliffe maintains a wide advantage in polls among black voters — the black voting bloc historically votes largely for Democrats — McAuliffe caused intraparty rifts in Virginia during the primary after entering as an automatic frontrunner in a field that came down to five candidates, three of whom were racial minorities, including two who were hoping to become the first black woman governor. 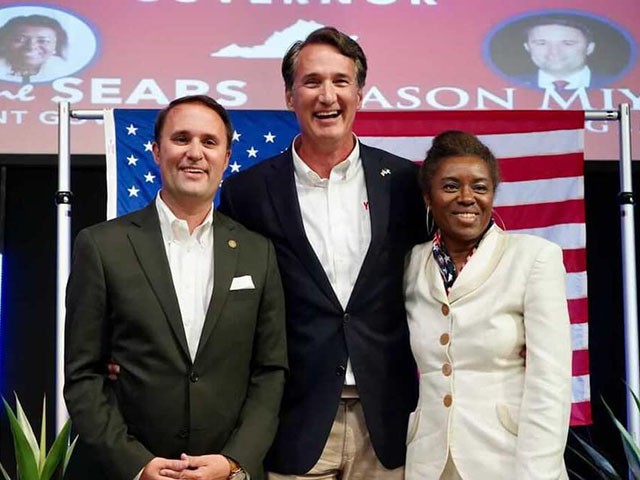 Jason Miyares, Glenn Youngkin, and Winsome Sears in their first joint appearance on May 24, 2021, in Dumfries, Virginia. (Glenn Youngkin campaign)

“All three of us received the endorsement, and it just reflects the fact that Virginians are coming together in an extraordinary way and rejecting this left, liberal, progressive agenda that’s not only taking over Virginia but taking over America,” he said.

Youngkin added, “On behalf of America, Virginians are going to go to the polls right now and make a huge statement: ‘No, we’re not going to let it happen anymore.’”

Next to the densely populated Northern Virginia, Hampton Roads is the second-most populated metropolitan area of the state at about 1.8 million people. Located in southeast Virginia, Hampton Roads includes the state’s most populous city, Virginia Beach, and according to the Virginia Public Access Project, its seven core cities alone are comprised of nearly half a million black residents.

The HRBC endorsement falls in line with Youngkin’s assessment in April — as he discussed his potential path to victory on a previous radio appearance with Breitbart News — that he was seeing “strength” in the Hampton Roads area.

“Mathematically, we can win a reasonable chunk of Northern Virginia back,” he said. “We don’t have to win fully Northern Virginia, 51 percent. We just have to get her back from the 70–30 to close to 60–40, and then with the strength that we have across our red counties, and, oh by the way, the strength we’re seeing in Hampton Roads and suburban Richmond, we’re going to win this November.”

The HRBC website states the caucus is “a non-partisan organization solely committed to supporting candidates who support our missions and initiatives.”