It turns out that the leftists who harassed moderate Sen. Kyrsten Sinema (D-AZ) in a public restroom over the weekend are not only funded by billionaire George Soros but are also supported by a group connected to several of Sinema’s U.S. Senate colleagues including at least one vulnerable Democrat up for reelection next year.

Outrage erupted across the internet Sunday when a viral video revealed that several left-wing activists associated with the group Living United for Change in Arizona (LUCHA) stalked Sinema into a bathroom where she teaches at Arizona State University (ASU) while demanding that she support President Joe Biden’s “Build Back Better” agenda. According to the Washington Free Beacon, LUCHA received over $1.5 million from the George Soros non-profit Open Society Foundation in 2019 and $250,000 in 2017. The group also reported “around $1.7 million in revenue in 2019 and $328,000 in 2017,” the Beacon noted. 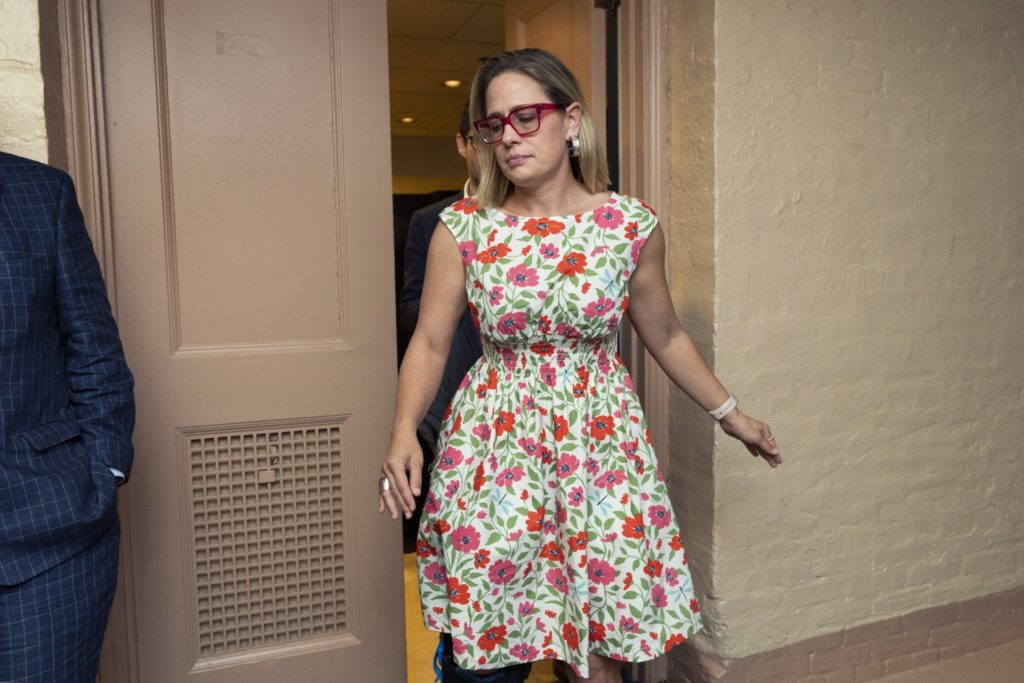 In this June 22, 2021, file photo, Sen. Kyrsten Sinema, D-Ariz., leaves a closed-door bipartisan infrastructure meeting on Capitol Hill in Washington. Sinema says activists who confronted her outside an Arizona State University classroom and filmed her inside a restroom were not engaging in what she called a legitimate protest. The Democratic senator said in a statement Monday, Oct. 4, 2021, that the activists unlawfully entered the suburban Phoenix campus building, which was closed to the public. (AP Photo/Manuel Balce Ceneta, File)

Bold PAC, the fundraising arm of the Congressional Hispanic Caucus, gave $12,500 to Living United on Aug. 4, according to Federal Election Commission records. The committee includes more than three dozen of Sinema’s Democratic colleagues in the Senate and House. Sens. Catherine Cortez Masto (Nev.), Alex Padilla (Calif.), and Robert Menendez (N.J.) are listed as members of the committee on the Bold PAC website. The senators did not respond to requests for comment about Living United’s confrontation of their Democratic colleague.

Facebook CEO Mark Zuckerberg’s pro-immigration charity, FWD.us, gave $7,500 to Living United last year. The Ford Foundation gave the organization a $500,000 grant in 2018. The National Education Association, the largest teachers’ union in the country, contributed $60,000 to Living United in both 2017 and 2019.

None of Living United’s donors responded to requests for comment.

As of this writing, Menendez, Cortez Masto, and Padilla have all not publicly condemned the harassment of Sinema. Cortez Masto’s connection to this group may complicate her reelection efforts next year as her Trump-backed GOP challenger, former Attorney General Adam Laxalt, is already ripping her for it:

For months the media has falsely labeled @CatherineforNV a "moderate." Now we find out she's part of the PAC that funded an attack on her colleague by left-wing activists.

She should disavow this organization immediately. I doubt she will. https://t.co/csucDD6QaZ

Will @brianduggan tell his Progressive base that @SenCortezMasto is attacking moderate Democrats? or nah? https://t.co/mamj5qewnh

Where is @RalstonReports? I bet a Progressive has paid his blog a handsome sum. https://t.co/Kma0Z9pUIg

Grenell is the chairman of Laxalt’s campaign. Trump has endorsed Laxalt in his U.S. Senate bid, which is gaining traction per recent polling, including one that just came out from the Nevada Independent showing him just a few points behind Cortez Masto. Cortez Masto leads Laxalt by only four percent — she has 45.5 percent and he has 41.2 percent — a lead that is less than a half of a percent outside the survey’s four-point margin of error. That same poll shows an even tighter race for governor in Nevada, with both major Republican candidates — former Sen. Dean Heller (R-NV) and Clark County Sheriff Joe Lombardo — in statistical ties with incumbent Democrat Gov. Steve Sisolak.

Democrats have been particularly quiet when it comes to criticizing the incident with Sinema in the bathroom at ASU this weekend, and most have not said anything. The few who have said something have not been clear or convincing in criticism of the behavior, including most importantly President Biden himself. 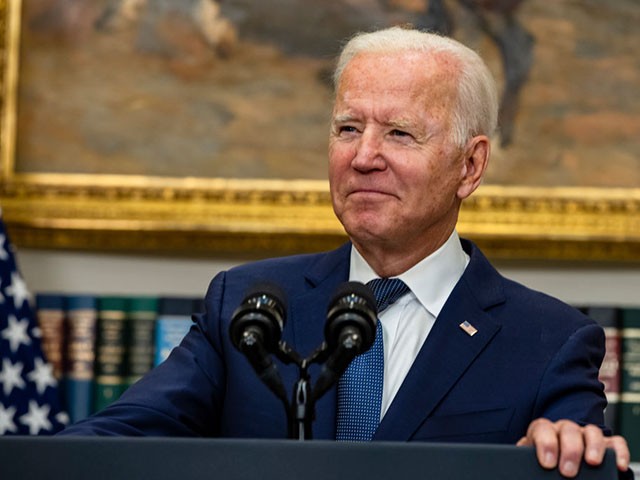 U.S. President Joe Biden speaks in the Roosevelt Room at the White House on August 22, 2021, in Washington, DC. (Photo by Samuel Corum/Getty Images)

When asked about the incident, Biden said that while the tactics are inappropriate, it is “part of the process.”

“I don’t think they’re appropriate tactics, but it happens to everybody. The only people it doesn’t happen to are people who have secret service standing around them. It’s a part of the process,” Biden said on Monday.

White House Press Secretary Jen Psaki later elaborated that it was “inappropriate and unacceptable” that Sinema’s classroom, students, “the safe and intellectually stimulating environment she’s worked to create during the years of teaching at [ASU] was breached.”